Activison's 'The Walking Dead' makes the zombies the stars

Variety is the spice of zombies

Share All sharing options for: Activison's 'The Walking Dead' makes the zombies the stars

Though it's set well before the events of the television show, Activision and Terminal Reality's take on The Walking Dead honors what has made the series such a hit: Grotesque multitudes of zombies in various states of decay.

Though it's set well before the events of the television show, Activision and Terminal Reality's take on The Walking Dead honors what has made the series such a hit: grotesque multitudes of zombies in various states of decay.

Terminal Reality's Glenn Gamble walked a group of Gamescom 2012 attendees through some of the concepts behind the game, though save for a few stills and the game's announcement trailer, we did not get to see it in action.

The Walking Dead stars the show's reddest-necked survivors, the Dixon brothers, on a cross-country journey in search of supplies and other survivors. On their trek, the player will need to make often decisions ranging from relatively trivial — which route do I take through the abandoned car-covered urbania? — to far more difficult, and ethically dubious — you come across a survivor, but your truck is fresh out of empty seats.

The latter choice will be made slightly easier (mathematically speaking, not morally) by comparing the statistical or practical bonuses each unique survivor can bring to your party. Do you take on the hunter, who is more helpful in a firefight? Or the doctor, who is better at scavenging for vital medicine? Do you take one or the other over the mother of a lost child who you're ferrying across the country? Or find a larger car that can hold all three — but consumes more gas and moves slower in the process? 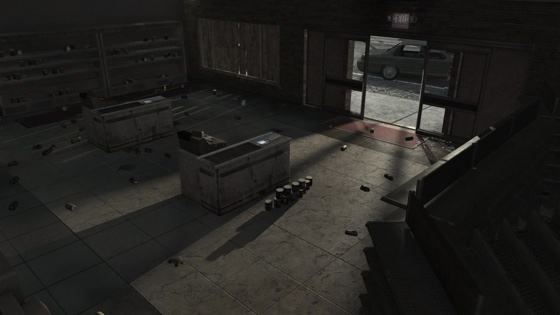 As the Dixons et al make their trip, they'll stop at cities large and small to scavenge for supplies, leading to more direct contact with the ever-present walkers. Though coming upon a loaded gun may be a stroke of luck, Gamble emphasized that using it should only be a last resort. A well-placed headshot can take out a walker that's within biting range, but the shot will alert all the walkers in the city to your presence — considering walkers are best left undisturbed, that would be a bad thing.

Walkers are best dispatched with melee weapons, or avoided entirely.

Walkers are best dispatched with melee weapons, or avoided entirely. Both are equally wise strategies, but carry their own considerable risks. Though the zombies are slow and shambling, they blend easily into the carnage that's swept the country — walk over a walker, and you could get bitten. Get grabbed by a walker while you're trying to bludgeon them, and then fail to fight them off, and it's all over. Sneak into a building without noticing the hungering mass within, and you're done for.

All of that is speculative, however. Even at this demo, no gameplay footage was shown off. What was demonstrated was the great lengths Terminal Reality is taking to replicate the show's real stars: the walkers.

Rather than inject dangerous scenarios with a gaggle of pre-made walkers, each zombie will be randomly generated from a palette of hundreds of options. Skin tone and quality, animation, eyes, wounds, and all the super gross stuff in-between will be rolled to create a totally unique zombie. It will only take a handful of walkers to overpower you, but The Walking Dead will be capable of generating many, many more than that.

But zombie games cannot live (or un-live) based on zombies alone, regardless of how varied and grotesque its zombies may be. Don't get me wrong: they look fantastic, as decomposed and menacing as Stargate Studios' television ghouls. And the mechanisms behind the Dixon bros' cross-country survival tour sound ambitious. But until we see the two in action, it's going to be hard to tell if The Walking Dead will rise above the cruft in the ever-burgeoning zombie game genre.