Deadpool throws comedy spaghetti at the wall, sees what sticks

Throwing comedy spaghetti against the wall

Share All sharing options for: Deadpool throws comedy spaghetti at the wall, sees what sticks

Video games take all kinds of different approaches to humor: Puerile one-liners, irony, surrealism, pop culture allusions, excessive violence and sexuality, subtle self-references, and so on. Deadpool, the next project from Transformers developer High Moon Studios, takes all of those approaches.

It doesn't hone in on a specific comedy styling, per se. All of the comedy that there is — the entire gamut — is delivered in constant salvos, with little pause in between.

From the very start menu, the titular, scarlet-clad hitman cracks wise, knocking on the glass of the television to inquire if there are any women playing. Upon starting the game, Deadpool boards an invisible elevator and, as he sinks off the screen, sticks a single thumbs up in the air as the Terminator theme plays. From there, we're informed of his hit: media mogul Chance White, whose new reality television program, Jump the Shark, resulted in the death of its first celebrity contestant, who was ... eaten by a shark. Now, his sister wants revenge, and you're her instrument.

The first thing Deadpool does when he lands in the sewers beneath White's compound is inflate and jump on a bouncy castle. Then he tells you which button on the controller you need to press to make him jump, and chastises you if you fail at that menial task. Then he, and the two voices that occupy his head, argue over whether the sewers smell like poop, evil, or evil poop. Then, after completing the tutorial for chaining together wall jumps, he exclaims that he now knows "why Spider-Man likes this." Then he hums "Smooth Criminal" to himself. Then he cuts a man in half. Then he sings and dances along with Patsy Cline's "Crazy" on an elevator. 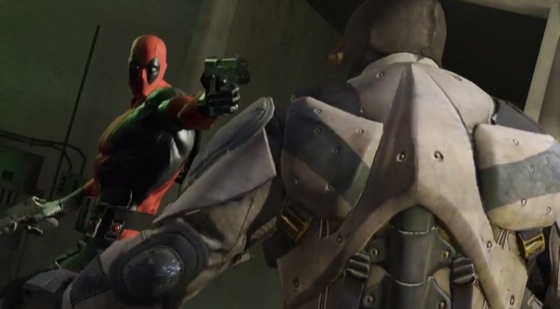 Between jokes (or, sometimes, during), Deadpool will execute foes using his usual methods, stringing together vicious flurries of katana cuts with dual-pistol juggles and special attacks mixed in for good measure. Using them artfully allows the player to start building up a combo, boosting their cash earnings which can, in turn, be spent on new guns, melee weapons, and special gadgets, all of which can be upgraded as well.

Comedy is delivered in constant salvos, with little pause in between.

Combat during the hands-off demo looked fine, but not quite as smooth as other combo-based action games — a Devil May Cry, for instance. But a hands-off demo of an early, early build probably isn't the best time or place to make those kinds of evaluations. High Moon is focusing its efforts on what makes Deadpool truly different: the fact that he's absolutely and irreversibly a total nutbar.

It might not be a bad focus, all things considered. Though a few of the demo's jokes fell flat, there were more than plenty which elicited roaring laughter from the whole room. I'm not saying it can't be both, but there are already a lot of great games in the world — funny games are few and far between.