Look out behind you!

Share All sharing options for: 'Crysis 3' Hunter mode sums up the 'Predator' films in two minutes

Crysis 3's multiplayer Hunters mode, revealed earlier this week during EA's Gamescom 2012 press conference, turned me into a shrieking child in front of my professional peers, and I probably won't ever forgive it for that.

Crysis 3's multiplayer Hunters mode, revealed earlier this week during EA's Gamescom 2012 press conference, turned me into a shrieking child in front of my professional peers, and I probably won't ever forgive it for that.

Think of the cliched expressions of panic you've seen in films like Predator, or any other film involving humans being served up as the Most Dangerous Game. The frantic scrambling into tight spaces, the questioning of whether to stay in a pack or go solo, the shooting into the darkness and hoping your bullets hit something — I did all of it, almost perfectly in that sequence.

Here's the mode in a nutshell: Two Hunters are armed with knives, compound bows and always-on invisibility, as well as all the other perks of the Nanosuit, including but not limited to mad hops. The remaining 10 players (or 14 on PCs) can choose from three pre-set loadouts, and then must survive for two minutes. With the hunters more or less out of sight, they have to rely on proximity sensors to alert them of their impending doom. Or, if they've made an educated guess of where the Hunter is, they can throw an EMP grenade in their direction to disabling their suit's camouflage.

Where things get really tricky is that killed players respawn as Hunters, which adds a unique tempo to each match. The longer your team can survive, the easier things are going to be for you — living teammates means less Hunters, and more targets that aren't you. If everyone but you dies in the first thirty seconds, you're more or less screwed. 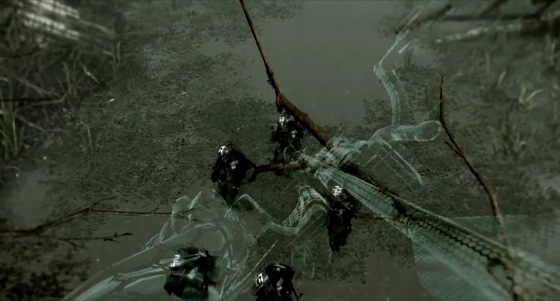 In either case, when playing the Hunter, time is not on your side. You can be killed, but your main concern is the scattering or hiding of your prey. They're all on your radar, you just need to find a stealthy enough approach to off them without being spotted or killed yourself.

It's fun, but I actually preferred the horrifying thrill of being hunted. See, you're not really on a team with your fellow survivors — you get a survival bonus if you can make it to the end of the round alive, and points for each kill, all of which are tallied across five rounds. If you decide to find strength in numbers, it's not for the betterment of the team, it's because you want other meat around you. Or, you could try and hide, and smirk with satisfaction as a big cluster of players gets picked off. (Though once they respawn as Hunters, you probably won't be laughing anymore.)

Layered on top of Hunter and all of Crysis 3's multiplayer modes is a clever social feature called the New York Feed. It's represented as a visual map of New York containing all of the multiplayer maps, each of which are updated with accomplishments earned by your online friends — high scores, rank-ups, and so on.

Each challenge carries its own expiration date (usually just a few matches). The shorter the timespan and more difficult the challenge, the more XP it will reward if accomplished.

It sounds like enough to keep players coming back for more, but the strength of Hunters mode can probably stand on its own. I reflexively shouted wild obscenities at complete strangers in the small demo compartment during our five-round bout of Hunters. I really couldn't help it; when you're crawling through a narrow tunnel, and hear your radar start to quicken, and you have to guess which direction you should fire off your remaining handful of bullets, what else are you supposed to do?