Turn that boring fireball into a small sun

While Van Helsing certainly shares a great deal with Diablo 3 and Torchlight 2, it incorporates a mechanic that might just be enough to help it stand above the crowd: the ability to augment powers without digging through menu after nested menu.

The Incredible Adventures of Van Helsing is going to face some stiff comparisons, held up and measured against fellow action role-playing games Diablo 3 and Torchlight 2.

But while Van Helsing certainly shares a great deal of their attributes, it incorporates a mechanic that might just be enough to help it stand above the crowd: the ability to augment powers without digging through menu after nested menu.

Players of dungeon diving action RPGs will likely recognize most of Van Helsing's combat and progression mechanics. As Van Helsing — actually the son of Bram Stoker's vampire hunter, who's been dragooned into the family business by his pops — players will traverse isometric cities and dungeons while hunting down swarms of baddies and fulfilling quest objectives. He'll do so by wielding swords, guns, and magic spells, each of which have their own trees of learnable powers which can be slotted two at a time onto the interface.

Layered on top of that are a ton of other customization options. Players can assign attribute points after leveling up, learn passive auras which boost their abilities, equip ward abilities which grant temporary defensive buffs and — naturally — equip tons of loot of varying types and qualities. 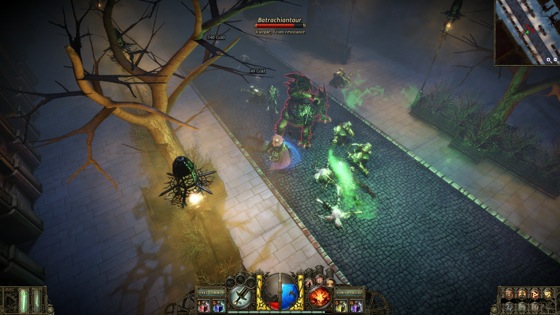 Where Van Helsing gets clever, and what I saw for the first time during a Gamescom 2012 demo, is how it allows players to change their powers on the fly. When you level up, instead of increasing the level of or learning a new ability, you can unlock a Catalyst for an ability you already know. Each ability has three pre-set Catalysts to unlock which change its various properties; a Fireball spell, for instance, can have its damage upgraded, or its area of effect, and so on.

But these augmentations aren't always on. See, the player earns Rage, a resource separate from their standard health and mana, by killing large groups of enemies. They can spend that Rage on the Catalysts to activate them the next time their respective power is used. Each Catalyst is bound to the D-pad on 360, and can be stacked up to three times — an occasion which results in a super powered version of whatever ability is being changed.

For instance, slotting three points of rage into the area of effect Catalyst in the Fireball spell just requires three quick presses of the D-pad, turning the spell into an instant-use supernova. Other Catalysts open up more strategic options, but I didn't do too much tampering with those once I discovered I could throw the sun, which is just as satisfying as it sounds.

The Incredible Adventures of Van Helsing is scheduled to launch early next year for Xbox 360 and PC.