Watching a plan come together

Share All sharing options for: 'Dishonored' lets you make your master plan

Dishonored is a game about making plans; about the constant evaluation of resources, environments and capabilities, and then the scheming of how to use them with maximum efficiency. As I learned in my QuakeCon demo, it is also about occasionally watching your plans come crumbling down around your ears.

Few things are more satisfying than watching a plan come together.

Dishonored is a game about making plans; about the constant evaluation of resources, environments and capabilities, and then the scheming of how to use them with maximum efficiency. As I learned in my QuakeCon demo, it is also about occasionally watching your plans come crumbling down around your ears.

The demo saw me crashing the party of the high society masquerade of one Lady Boyle by any means possible, at which point I would need to discover which masked attendee she was, and assassinate her. Reaching the party was problem one: The streets were patrolled by "tallboys," armored gunmen on wiry stilts reminiscent of Half-Life's tripods — appropriate, given Dishonored designer Viktor Antonov's history with City 17.

My master plan involved throwing some debris down a dead end to attract its attention, allowing me to cross the bridge to the party. In doing so, however, I alerted him to my own position. As I prepared for my impending doom, I decided I'd try opening the nearby dumpster, and hopping inside; a plan which, to my surprise, actually worked. After losing some heat, I was able to make it into the courtyard and blend with the locals. 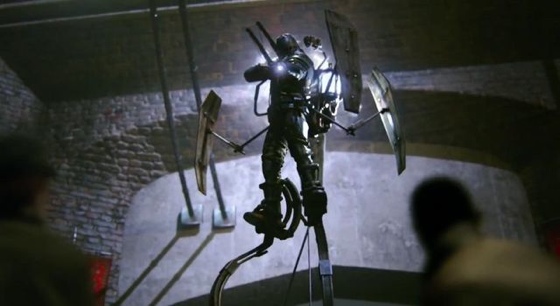 A side note, though — two different demo players nearby accessed the party in two far more rewarding methods. One managed to use his "Possession" ability to temporarily control a fish in the channel underneath, and swim into the sewers underneath the host's house. One used the "Blink" ability to flash from rooftop to rooftop. Both were much, much cooler, and arguably more sanitary.

On my way into the party, I was alerted to use the "Heart," a sort of compass which can be held (instead of a power or weapon) to pinpoint Runes and Bone Charms hidden in the environment. Runes are a currency which allow you to upgrade and purchase powers, while Bone Charms are equipable accessories that modify the abilities you already have.

Dishonored is a game about making plans

Reaching the party, I first hunted down a "Lord Snow" to deliver an unopened letter, and satisfy a side quest. The letter, as it turned out, was a challenge to a pistol duel, turning me into the sender's unwilling champion. We stood ten paces, facing away from one another, until a three-count had expired, we turned, and nearly simultaneously, blew each others' brains out.

After reloading, I made a different plan. After the three-count, I used my "Bend Time" ability to bring the world around me to a standstill, turn on my heels, and fire three shots, which hung in the air until I sent them on their way by deactivating the power. "Witchcraft," Snow's seconds shouted — but the quest was fulfilled. I looted his body, dumping it in the bushes for both hiding and composting.

I began my investigation into which one of the three Lady Boyles — a mother and her two daughters — was the matriarch and target. Guests suggested peeking upstairs to find clues about Mama Boyle's costume. The main stairway was guarded by a wall of electricity; using my "Dark Vision" ability, I saw the conduits powering it running towards the basement. I'm no engineer, so I looked for a more direct route.

The world of Dishonored is absolutely absorptive

After causing a ruckus in the kitchen, I sneaked past the very distracted guard and up the staff staircase in the back of the house. I prowled around lurking patrols as I moved towards Lady Boyle's dressing room, and stole every single thing that wasn't pinned down — paintings, pearls, mantle dressing, the works. After finding her diary, I learned Boyle's costume, as well as her penchant for music.

Playing the mysterious stranger card, I attempt to seduce the now-identified Lady Boyle, inviting her to the secluded Music Room for a one-on-one - though a clumsy guard won't leave us alone, banging obnoxiously on the nearby harpsichord or bending over the unlit fireplace. My patience wore thin, and then snapped, as I unceremoniously shot down both parties. The jig was up.

My plan was to then harmlessly Blink my way out of the house, but the presence of "Observers" — guards who can nullify all your magic powers — scrapped that plan immediately. I gracefully slid across almost all of the foyer, slicing knees as I bashed through the front door. The heat was off me for a matter of seconds as the outside guard learned of the assassination, giving me enough time to scurry up a wall, blink onto a nearby balcony, and leap five stories into the channel, and exit, below.

Games are at their best when they're rewarding, and this Dishonored demo had rewards to dole out in spades. The world of Dishonored is absolutely absorptive — I wanted to comb the cityscape not only for hidden power-ups, but to learn more about the forces that formed the jagged, steampunk skyline.

Moreover, though, I wanted to figure out new, and better ways to achieve my goals using my abilities. Hours after the demo, I still find myself drafting intricate getaway schemes involving rat swarms and tranquilizer bolts. Like a catchy album, this latest Dishonored demo has gotten inexorably stuck in my head.