God of War: Ascension is the story of how Kratos loses his humanity

"I think you're going to see more of a human side to him." Mark Simon, Sony Santa Monica

Share All sharing options for: God of War: Ascension is the story of how Kratos loses his humanity

God of War: Ascension will feature a Kratos scarred by the familicidal events that led to his war with the gods — but not yet corrupted by the events of the core God of War trilogy.

Kratos is no stranger to collateral damage in God of War 1, 2, and 3. Some puzzles can only be solved by executing an innocent citizen of whichever city Kratos is visiting his wrath upon. Sometimes, those civilians aren't even doing anything to impede his quest for celestial vengeance: they're just in the wrong place (in front of Kratos) at the wrong time (when Kratos is angry, which is all the time).

God of War: Ascension lead designer Mark Simon told Polygon at Gamescom 2012 that Ascension would feature a Kratos that hasn't reached that level of sociopathic violence quite yet.

"For example, there's the guy who's against the wall, and there's a fire, and in order to get past him Kratos just kills him and moves on," Simon said. "I think what the Kratos in this game would do is, he would try to move around the guy. He wouldn't try to kill him to move on. He's not going to go massively out of his way or anything like that, he is very driven to do what he does — the guy is a Spartan general, he's killed hundreds and hundreds of people.

"But the civilians in this case, he doesn't kill any civilian, here. The ones that are killing the civilians are the beasts that he's fighting against, and we want to get back to that. Because it's important to know that, like, these guys are terrorizing the workers on this statue. Kratos is going to go in and fight those guys, so in a way he's more heroic for doing things like this. When the Juggernaut shows up, he kills three guys just like that, and Kratos runs in and fights this guy. That's the monster, in this game, not Kratos." 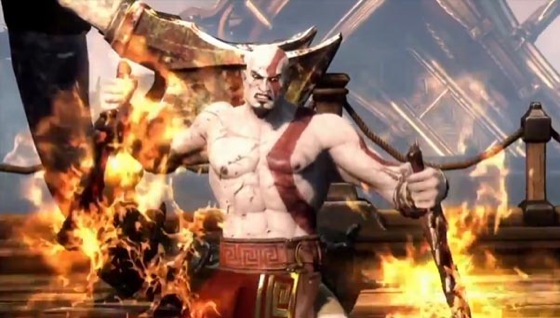 When the human beings of God of War are more than just sacrificial lambs bound to deadly puzzles, it helps make the game's world far more alive, Simon said.

"This is kind of the story of how somebody loses his humanity."

"We also want the worlds to feel a little bit richer, because when you take the people who live here and work here and you add them into the worlds, then it starts to feel a little bit more believable," Simon said. "One of my favorite parts in God of War was the town square in Athens, where you had all the guys running from the monsters in the center of the square, and Kratos was running straight towards the square in order to go fight against them — that's the thing that we want to be able to do here."

Ultimately, God of War: Ascension's Kratos will possess a decency towards humanity that we've never seen from him. That's because in God of War: Ascension is about his transition from a man — a violent man, but a man nonetheless — into the hate-fueled agent of the gods seen in the core trilogy.

"I think you're going to see more of a human side to him," Simon said. "The way that Kratos tells a story in terms of a main character, though, is different. He doesn't say a lot, but he does a lot, and it's all through action. It's one of the things we try to emphasize with how he moves through the world, to the story that we're going to tell about him is: this is Kratos as a man, or a Spartan general. At this point in his life, he's not the uber-angry-godkiller. Something got him to that state. This is kind of the story of how somebody loses his humanity."