Back to the grind.

Players who have reached the level 60 experience cap with their Diablo 3 character(s) will have something to look forward to in the game's next major patch. Blizzard is adding 100 new levels of progression with the introduction of the Paragon system, coming in Diablo 3 version 1.0.4.

"We understand that some players feel frustrated once they hit level 60 because they no longer feel like they're making progress," Wilson writes on the official Diablo blog in explaining the Paragon system. "It can be demoralizing to play for an hour, not get any drops, and also be out a big chunk of gold from repair costs. Your play session may not only end without an upgrade, it can wind up being a net loss."

The Paragon system's increase in magic find bonuses is an attempt by Blizzard to address magic find gear-swapping behavior — that last-second switch to alternate armor, weapons, and accessories players have been making before killing a monster to maximize their chances of sweet loot drops. Wilson notes that at Paragon level 100, players will max out their magic find and gold find stats at 300 percent, a bonus more attractive than gear-swapping, Blizzard hopes.

In addition to increased character growth, Blizzard will add visualization of player Paragon progression every 10 levels with new badges. 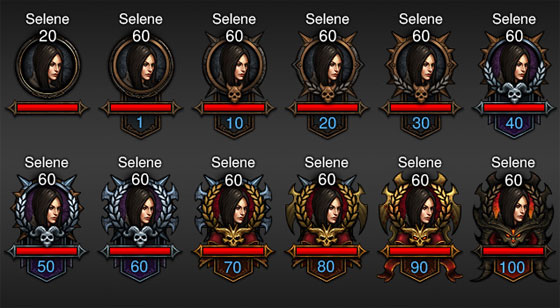 "The first Paragon level should take about as long as it took most players to get from level 59 to 60, and the experience requirement will rise from there," Wilson explains. "The time to reach the upper Paragon levels approximates the long-term time investment required to get a level 99 character in Diablo 2."

Diablo 3's 1.0.4 patch also makes substantial changes to the game's core systems, Legendary items, and each of the game's five classes, which you can read more about at the game's official blog. An official release date for the upcoming patch is expected in the coming days.