"Hopefully people are excited by the changes. We are." Mark Lamia, Treyarch

With its drastically different "Pick 10" class creation feature and branching single-player campaign, Call of Duty: Black Ops 2 is introducing quite a few bold changes to the annual franchise.

The changes are a stark reminder of the popular franchise's shared development duties between Infinity Ward (the Modern Warfare series) and Treyarch (World at War and Black Ops). There's certainly similarities between the two in terms of tone, brand identity and technical specs — both place a huge emphasis on running at a butter-smooth 60 frames-per-second, for instance. But they've always had their differences; and Black Ops 2 is set to highlight those differences like no game in the franchise has before.

Treyarch studio head Mark Lamia reminded Polygon that the two Call of Duty series have their own styles and characteristics, and that Black Ops 2 will showcase what his studio is all about.

"That was another game last year; this is our game," Lamia said. "It's been a couple years since Black Ops came out. It's not like you just take last year's Call of Duty and update it. As a matter of fact, the game and the technology that we started with was Black Ops; it's a different branch inside of Call of Duty."

Lamia said that the changes inside of Black Ops 2 were a result of Treyarch's creative teams wanting to see how far they could stretch the series' commonalities.

"We've made Call of Duty for a long time, and we wanted to make some different changes inside the franchise," Lamia said. "We specifically sat down when we were making Black Ops 2, and rethought everything, from setting, to the new toys to play with, to story branching, to meaningful choice inside the campaign." 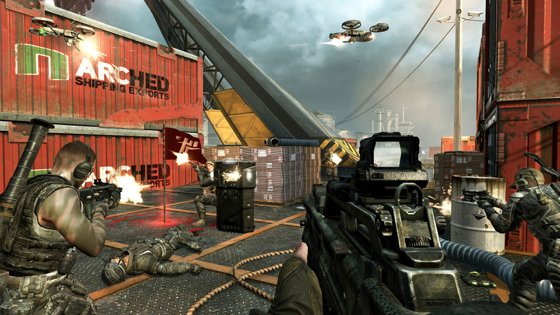 The biggest reason Treyarch has so much room to experiment with the franchise's nature is the literary revisions they're allowed to make to history — or, in Black Ops 2's case, to the future — because of the Black Operations subtitle.

"When we decided to talk to Activision about the branding of Black Ops, it was very deliberate, like 'Look, Black Ops is more of a characteristic of the personality of the game.' We love the idea that Black Operations were off the radar and creatively, you had that conceit that these guys could do all kinds of things. It didn't have to fit into any kind of time period or preconceived notions of what these operations might be like.

"Hopefully people are excited by the changes. We are."

"So the teams got very creative with that, whether it was with the story or the multiplayer. You'll see all kinds of gadgets, you saw it in Black Ops, you'll see it in Black Ops 2, we just went for it with the weapons. It was about: 'This is fun to play.' We were able to, in our own way, justify it within the fiction of Black Ops. These guys, they always had access to the best of the best. They'd get prototype weapons, they'd modify weapons, they'd do all kinds of stuff perfect for gameplay. That was a really great creative thing to build on."

Though Treyarch has been developing Call of Duty games since 2005's COD 2: Big Red One, Lamia is hopeful that the next installment will help the studio stand out, and strengthen the bond between the development team and incumbent Call of Duty players.

"When you develop a game, it very much reflects the personality of your team," Lamia said. "You can see now that we've gotten a chance to introduce a few members of the team, I think people are starting to get to know — even though we've been around for a long time — Treyarch a bit better.

"Hopefully people are excited by the changes," Lamia said. "We are."