"We believe in the power of the Xbox Live community" Jose Pinero, Microsoft

Microsoft wants to push election engagement forward by using its Election 2012 hub on Xbox Live as a proof-of-concept for the future of television and the future of polling. The 2012 presidential election may already be integrating technology in unprecedented ways, but the hub furthers that trend.

Microsoft wants to push election engagement forward by using its Election 2012 hub on Xbox Live as a proof-of-concept for the future of television and the future of polling. The 2012 presidential election may already be integrating technology in unprecedented ways, but the hub furthers that trend.

Microsoft hopes the hub will "show the world what interactive TV can be" and prove that "it's available now," said Jose Pinero, senior director of marketing and public relations for Microsoft, in a phone interview with Polygon. "To me, this is just the beginning."

The interactive element of the hub is a live polling system. It will gather impressions from Xbox Live users as they watch live broadcasts of the three scheduled presidential debates between Barack Obama and Mitt Romney.

According to Pinero, Microsoft believes this will be "probably the biggest real-time reaction poll on the presidential debates" in history, depending on the number of users watching.

That's right: no more post-debate call centers or email surveys. Instead, live opinions across the diverse Xbox Live user base will instantly be available to the public. And it will all take place on the Xbox 360.

The success of the Xbox 360 has given Microsoft what it wanted all along, ever since the launch of the original Xbox over a decade ago: an entrée into the living room, and a platform to bring the power of the internet to TVs. Gamers complain that the 360's growing media capabilities have overtaken the console's ostensible priority — playing video games — but Microsoft doesn't see it that way.

"Our motto is based on partnerships" with "content distributors, content aggregators, [and] content creators," said Pinero. They're the foundation of the Election 2012 hub: Microsoft partnered with Rock the Vote, as it did four years ago; YouGov, a market research firm; Face the Facts USA, a nonpartisan coalition; and NBC News. The hub, which is available only to Xbox Live users in the United States, will offer daily video content from NBC News and allow users to partake in daily polls from YouGov.

Microsoft is looking to turn Xbox Live users from mere viewers into "participants in the process." Xbox Live will broadcast the presidential debates and allow users to contribute to a nationwide discourse on their Xbox 360 consoles. People watching on Xbox Live can use their controllers or Kinect sensors to give a thumbs up or thumbs down as a debate progresses, and YouGov will compile that data to provide a real-time graph of Xbox Live users' impressions of each candidate. YouGov will also provide specific questions during debates, another way for people to get an idea of how their fellow Americans are responding to the candidates.

In addition to hosting interactive debates, the Election 2012 hub will offer plenty of informative video content, including some exclusive programming. The hub will open on Monday, August 27th, with a live feed from the Republican National Convention in Tampa, Florida. Microsoft has joined with the National Journal and The Atlantic for "Conversations with the Next Generation," town hall events from both the RNC and Democratic National Convention in Charlotte, North Carolina, which will be broadcast exclusively on Xbox Live. 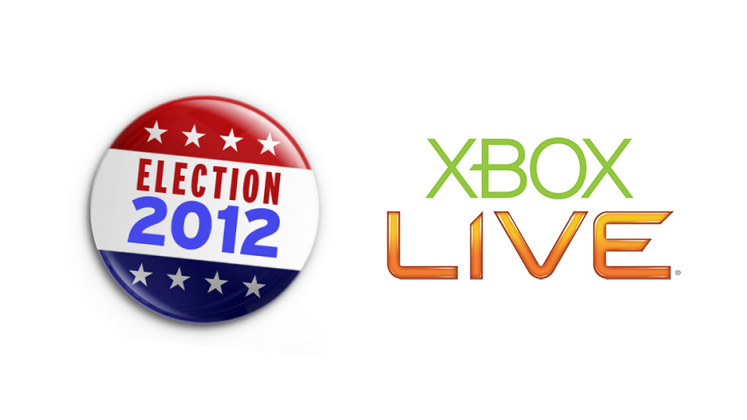 Microsoft also wants to "provide a public service" with its election programming, according to Pinero. Speaking of the company's partnership with Rock the Vote for the 2008 election, he said, "We were both very pleased with the results." The relationship is continuing this year: Rock the Vote will provide Xbox Live users with voter registration information and exclusive streaming music content.

To ensure that those new voters are well-informed, Microsoft has teamed up with Face the Facts USA, a project from George Washington University that seeks to put facts first in the American political debate. The Election 2012 hub will include videos from Face the Facts that elucidate the major issues at stake in the 2012 campaign.

Before putting together the Election 2012 hub, Microsoft commissioned a study of 1,678 Xbox Live-using households to gauge interest in the availability of informative, interactive election programming on the service. The study revealed something interesting: millions of Xbox Live users are registered to vote, but 40 percent of them haven't decided on Obama or Romney.

According to Pinero, those swing voters are "hard to reach via phone," but since they're already on Xbox Live, Microsoft can use the interactive hub as a way to track their opinions. "We're going to be paying close attention to how that group behaves," said Pinero. "We think that both political parties are gonna be interested in winning that audience, and tracking how that audience changes over time."

Microsoft wants to "show the world what interactive TV can be"

The hub will be available to all Xbox Live users, but any video content that comes from apps restricted to Gold subscribers, such as Hulu Plus and NBC's Today, will require a Gold account to access.

"We believe in the power of the Xbox Live community," said Pinero, adding that Microsoft wants to "harness the power of the platform" to provide an "access point" for the democratic process. It's a win-win situation: ideally, the country gets a more informed electorate and increased voter turnout, while Microsoft keeps Xbox Live users engaged with their Xbox 360 consoles.

Tech of the 2012 Presidential Election