'Music of the Spheres': The bouncing bullets of beauty and math

Where math and Islamic art collide

Share All sharing options for: 'Music of the Spheres': The bouncing bullets of beauty and math

Hamish Todd talks about the mathematics and Islamic art in his puzzle shooter, Music of the Spheres

A little person hurls orange-like bullets at the wall, at the ceiling, at the floor. The bullet-y fruit doesn't explode, it doesn't kill, it doesn't destroy. As it ricochets from surface to surface, bouncing down corridors, the notes of a glockenspiel begin to play. "Ding-ding-ding" it echoes as it bounces up and down, and when it disappears from the screen, silence.

Music of the Spheres describes itself as a 2D puzzle-shooter, but developer Hamish Todd's vision for it extends in a slightly different direction to most side-scrolling shooting games. It's not a violent game by any means, he says. It's not a game of us versus them, of blasting through obstacles, of getting a high score. On one level, it's a game about trajectory. On another, its about allowing the player to experience lovely things.

"I hate wasting time," Hamish Todd tells Polygon. "Many of the decisions I make are towards the goal of making the game concise and not wasting the player's time. I want the player to be constantly faced with the new and lovely things that are coming out of this. I don't want them to just sit there doing the same thing over and over again.

"The game is a linear experience. It's a series of environments that force you to be creative and notice things about it."

Todd has ideas of what he wants players to experience – sounds he wants them to hear, surfaces he wants them to shoot at, puzzles and platforms he wants them to engage with. He says that as the player fires off bullet rounds and sees how they interact with the game world they'll begin to notice patterns and be able to form strategies as to how they wish to approach the environment. A bullet can fire in eight different directions and, depending on what objects they hit at what trajectory, one of the eight notes of the westen glockenspiel will play. The sounds are a lovely thing, the construction of each level is a lovely thing, and even the enemies will be lovelier than your average.

"I call them playmates because, and this is going to sound so pretentious, but I think the idea of 'enemies' in a game might be a misnomer," Todd says.

"Think about the Goomba or the Medusa Heads in Castlevania – you can look at that enemy and it's possible to hate them because they're working to your disadvantage, but the question is what would the game be without them?

"These things are about challenge and the Goomba is used to construct things that you can have fun with. There are no enemies in Music of the Spheres' trailer because this is a game about trajectory, it's not about coming to hate some entity. There are things in my game that you shoot at but I try to embrace the idea that they're there for your benefit, and in a way they want to get killed."

Todd cites a review about Space Invaders Extreme that reads: "You shoot because you love shooting; the enemies get shot because they love getting shot. It's a game about love."

"I try to foster that in the aesthetic of the game," he says.

Music of the Spheres is a very mathematical game. From the trajectory of the fruity bullets to the Islamic-inspired backgrounds, every level is saturated with math.

"I was a math student and I know that math pervades the universe. You don't have to be a PhD to play and enjoy games like Braid and Portal even though there is really sophisticated math there," Todd says.

The backgrounds in Music of the Sphere is heavily inspired by Islamic art, which has a strong focus on abstract shapes due to limitations set by Islamic beliefs. 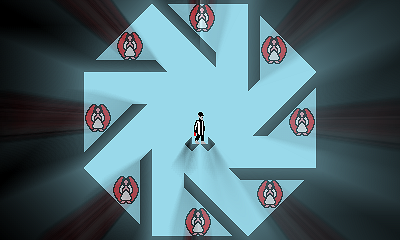 "In Islam, you're not allowed to depict nature, especially not humans because the belief is that's sort of evoking god and you're not allowed to evoke god," Todd says. "And the question is if you can't depict nature, what can you depict? You have to depict something because there's a human spirit where we just want to create beautiful things no matter what culture we're in, and we find a way no matter what our limitations are."

While studying viruses at university, Todd was informed that the math of what he was studying was linked to Islamic art. His class was studying mathematical tilings, with the very basic idea of tilings being that they tessellate and can go on forever in any direction as long as the shapes are of the same size and proportion – much like the tiles on a bathroom floor.

"But if you look at the tiles in the bathroom floor, they kind of repeat themselves," he says. "If you hear that this tiling goes out infinitely, that's kind of mathematically cool, but it's a really boring system. It's just squares and squares forever.

"So can you have a tiling that goes out infinitely with only a limited number of tiles and also never ever repeats itself? For ages we thought that if a tiling was infinite it would surely repeat itself at some point, but there was this English mathematician, Roger Penrose, who came up with the Penrose Tiling in the 1970s and it's just massive." 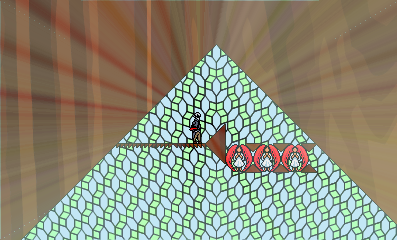 The Penrose tiling flew in the face of mathematicians once believed, and it was later discovered that Islamic artists knew of the Penrose tiling some 800 years before Roger Penrose made his finding. Not only did they know about it, but they used it extensively in their art and murals. Patterns could extend infinitely without ever repeating. Todd says he found the combination of the beauty of the art and the powerful mathematics behind them moving, which is why he included Islamic designs as backgrounds in his game. From bullet trajectory to level design and even background design, Music of the Spheres would try to convey lovely, mathematical experiences without the player ever seeing a number.

"Math is all over the place," Todd says. "I see this stuff as being so much like video games and I really admire how Islamic mathematicians and artists who made this stuff beautiful because they saw beauty in it.

"To be able to make beautiful things without any words, without any characters and with all these limitations ... they made something that was simply sublime."

Music of the Spheres is due in February 2013 on PC.