Why Plastic Piranha's 'Rekoil' is a perfect fit for Steam Greenlight

Share All sharing options for: Why Plastic Piranha's 'Rekoil' is a perfect fit for Steam Greenlight

Plastic Piranha's multiplayer first-person shooter Rekoil is one of the first games to be featured on Steam Greenlight. The game and the platform are a perfect fit for each other.

Rekoil, a multiplayer first-person shooter, made a splash at E3, and developer Plastic Piranha felt that the positive buzz would be enough to get the game noticed. The studio was right — Valve came calling, giving Plastic Piranha the hope that Rekoil would be sold on Steam.

But Valve had a slightly different idea. According to Kevin Dent, a business-development executive working to bring Rekoil to market, Valve requested that Plastic Piranha go through Steam Greenlight, its upcoming community-driven system for picking games to be distributed on Steam.

"We were kinda perturbed initially," Dent told Polygon in a phone interview, saying that Plastic Piranha viewed the request as an indictment of Rekoil's quality, as if Valve didn't think it was good enough to make it onto Steam through the usual channels.

Plastic Piranha was initially "a bit leery-eyed" about Greenlight, but in talking with Valve, the studio realized that the company "really wanted to pump some really good games into the channel," and that it liked Rekoil enough to want to make it one of the first games to be submitted for community approval on Greenlight.

"Valve genuinely wants to put the power back into the hands of gamers," said Dent. Luckily for Plastic Piranha, that's exactly what Rekoil is about, too. 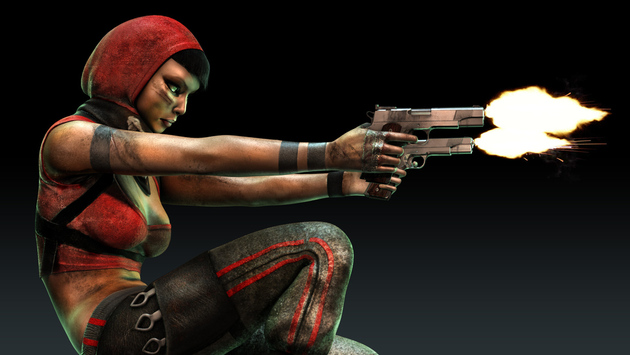 Plastic Piranha is a team of developers making a game that they want to play. Rekoil is the result of their collective vision, a back-to-basics FPS with a "pure" shooting experience. "My hook is that I don't have a hook," said Dent. This game is about firing guns at other players, and not much else — no napalm strikes, no turrets, no perks.

The developers building Rekoil have lots of experience making maps for shooters at studios like Battlefield developer EA DICE. Rekoil will ship with 10 maps, and Plastic Piranha hopes the community will like them. But if they don't, the game is fully moddable; the fans can design their own playgrounds.

It's that community-first mentality that makes Rekoil so appropriate for Greenlight. The service will function as a sort of "Kickstarter for games where you don't have to pay any money; you just vote," according to Dent. Developers can provide information, screenshots, and trailers for their games to grab fans' attention, and follow up their initial submission with updates on the game's progress. That continuous engagement — building a relationship with a community of dedicated fans — allows the developers to give those fans a say in the development process.

"If it fails, we're fucked"

Dent is bullish on Greenlight because he believes that most fans are "ignorant" about games, "in terms of what it takes to make a game." Mostly, it takes a lot of money. Plastic Piranha hasn't asked for any outside funding for Rekoil — no Kickstarter contributions, no venture-capital investments, no bank loans — and the company has spent about $2.4 million on it so far, with a projected final budget of $3 million.

Plastic Piranha hopes that Greenlight will help the company foster and engage with a passionate community of fans. Dent sees the system as an opportunity to give gamers an insight into the development process, to show them "how the baby's gonna grow up" — which he and Plastic Piranha believe will, in turn, help them to connect with and become invested in Rekoil.

greenlighting games is "the hardest part of the job"

Steam Greenlight also aims to give gamers ownership of the titles that show up on Steam. Normally, the process of selecting games is a painstaking and painful one for a publisher. Dent previously worked at a mobile-game publisher. He had to make "some really tough decisions in terms of greenlighting games," and he said that having to say no to 99 games out of 100 is "the hardest part of the job." With the community's help, Valve can make Steam a more welcoming platform, and "increase the volume and quality of creative submissions," according to the Steam Greenlight FAQ.

"The community should be deciding what gets released," says Valve. "After all, it's the community that will ultimately be the ones deciding which release they spend their money on."

In addition, the community will shape Greenlight itself. "Valve don't know what they have yet, because the consumer hasn't told them," said Dent. Indeed, Valve isn't even sure yet of the number of votes that a game might require to be greenlit, because the company can't gauge the response to the program until it's been live for some time. And considering Valve's penchant for constant change and reinvention, said Dent, "I don't think Greenlight will look like [the current] Greenlight in 12 months' time."

Plastic Piranha has the same hopes for Rekoil. Valve's properties are known among gamers for growing into industry-wide phenomena, thanks largely to fan engagement and support — consider the wide variety of Half-Life 2 mods and the transformation of Team Fortress 2. Dent said Plastic Piranha wants Rekoil to "live beyond our fingertips," so that with the community's contributions, it grows into something all its own.

The developers plan to supplement Rekoil with monthly post-launch downloadable maps: half made by the team, and half consisting of the best fan creations. "We want the gamer to have partial ownership of this game," said Dent. "That's where I believe the real art of game-making is."