'Zynga's The Ville ... is an unmistakable copy of EA's The Sims Social."

Electronic Arts claims that Zynga targeted 15 of its executives with detailed knowledge of The Sims Social in order to create a copy of the game.

Electronic Arts claims that Zynga poached executives and used their inside knowledge to create The Ville, an "unmistakable copy" of The Sims Social, according to a complaint filed today by EA.

Though the complaint attempts to establish a pattern of behavior proving that Zynga regularly copies its competitors' games, EA believes that its case of copyright infringement is also unique.

"Zynga went one step further, by targeting and hiring away a number of high level executives from EA who had access to highly sensitive, internal EA information about the development of The Sims Social," according to the complaint.

In the 50-page complaint, EA argues that Zynga established a pattern of copying competitors' innovations from its earliest days. To support its claim, EA cites a 2009 lawsuit from Mob Wars developer Psycho Monkey alleging that Zynga's Mafia Wars infringed on its copyright and a 2011 lawsuit from developer SocialApps who sued Zynga alleging that FarmVille copied myFarm.

"EA believes and therefore alleges that Zynga did not achieve its success in online social gaming through creative game design and innovation."

"EA believes and therefore alleges that Zynga did not achieve its success in online social gaming through creative game design and innovation," according to the complaint. "To the contrary, it is widely reported, and EA believes and therefore alleges, that Zynga explicitly discourages innovation in game design and instead watches successful games, plays and analyzes those games, and then creates its own games that closely follow the games of its competitors."

EA argues that unique gameplay mechanics distinguish the Sims franchise from other games, and cites reviews and accolades from games in the Sims series to reinforce its claim. It argues that the similarities between The Sims Social, which builds upon the innovation that EA and developer Maxis have been iterating on since The Sims was released in 2000, and The Ville are more than coincidental.

"Zynga's The Ville, released on June 26, 2012, is an unmistakable copy of EA's The Sims Social," according to the complaint. "Not only does The Ville blatantly mimic the entire framework and style of gameplay in The Sims Social, but it so closely copies the original, creative expression and unique elements of The Sims Social — i.e., the animation sequences, visual arrangements, characters' motions and actions, and other unique audio-visual elements — that the two games are nearly indistinguishable. The Ville was not an attempt to innovate on a game concept — it was an intentional effort to copy EA's creative work."

The complaint goes on to illustrate the similarities between The Ville and The Sims Social, which include similar personality types, decorative elements, showering sequences, and players' starter homes. 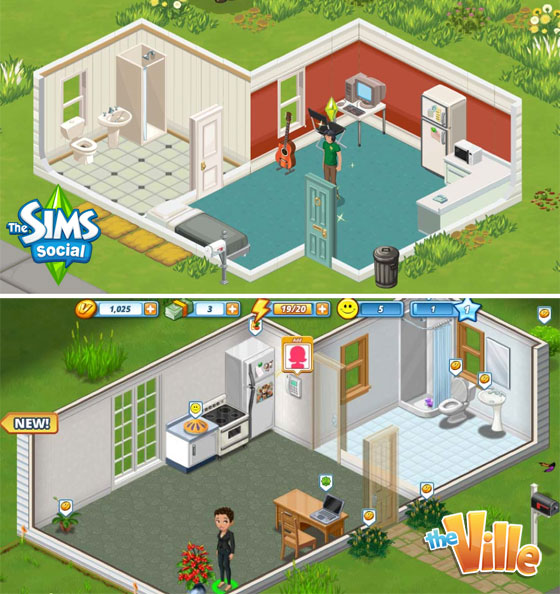 EA alleges that Zynga's copyright infringement reaches the minutiae as well, pointing out that, out of a possible 16 million different color combinations in a 256-color palette, The Ville shipped with the same eight skin tones available in The Sims Social. The similarities also seem to have confused the complaint's author, who mislabels images illustrating the "break up" dialogues in each game by identifying The Sims Social as The Ville and vice versa.

In a statement to Polygon, Zynga's general counsel, Reggie Davis, said that The Ville "builds on every major innovation from our existing invest-and-express games dating back to YoVille and continuing through CityVille and CastleVille, and introduces a number of new social features and game mechanics not seen in social games today."

Davis further accused EA of copying Zynga. "It's also ironic that EA brings this suit shortly after launching SimCity Social which bears an uncanny resemblance to Zynga's CityVille game. Nonetheless, we plan to defend our rights to the fullest extent possible and intend to win with players."

You can read EA's complaint below in its entirety.