Rise of the Triad bails on modern shooter conventions

Share All sharing options for: Rise of the Triad bails on modern shooter conventions

Rise of the Triad is the very definition of a niche title — it may very well be the game which established the definition in the first place.

Rise of the Triad is the very definition of a niche title — it may very well be the game which established the definition in the first place. The original game took an already bombastic shooter formula and layered on thick sheets of craziness on top of it. It's all gibs and jump pads for as far as the eye can see; but despite that, it never gained the broad fan base of id's more iterated-upon corridor shooters.

Interceptor Entertainment doesn't plan on losing a single iota of Rise of the Triad's spirit with their upcoming remake. That's probably going to put off a lot of people — compared to almost all modern shooters, it moves uncomfortably fast. The weapons aren't even remotely balanced; it wasn't even a moderately high priority. Levels will be maze-like; less so than the original, but far, far more so than a Call of Duty or Battlefield.

The multiplayer demo for Rise of the Triad which debuted at QuakeCon 2012 really drove the game's nicheness home. I was murdered, repeatedly and remorselessly by two tweens who had played the demo several times before, and had memorized the locations of the game's strongest weapons. As respawning nets you a single pistol, you're almost always severely outgunned by your killer.

That "zone control" mentality is characteristic of shooter days past — before pre-set loadouts became the norm. It mandates a franticness of movement that today's FPS games just don't possess. Strafing, rocket-jumping and the liberal use of jump pads are all required to stay afloat in Rise of the Triad's competitive matches.

Of course, this particular build of the demo also required patience for its frankly remarkable number of bugs. Clipping was a major order of the day, but the errors came in far more exotic flavors than that. To wit: Sometimes, while dual-wielding pistols, the player's character would randomly raise a third pistol, held by a third hand. I saw it happen more than once, and both times resulted in cackling, unreserved glee.

Interceptor has been working on Rise of the Triad for over five months, which isn't a heck of a lot of time for, well, any game. There's bugs, but there's also polish: The lighting and textures are dark and moody (albeit minimalistic), and the sound is surprisingly dynamic, with gunshots that extinguish in the open air, but reverberate down brick-lined sewers. It leans fully on the benefits of Unreal Engine 3 while honoring the thematic elements that made 1995's Rise of the Triad an underground hit. 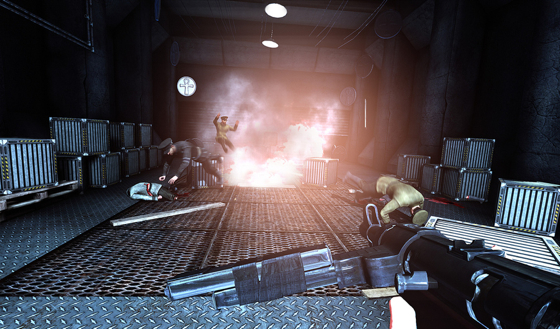 A few of these were disclosed in a behind-closed-doors single-player preview, which ran even rougher than its multiplayer counterpart. Its enemies possessed no AI programming whatsoever, and it required constant resetting, as it was running on the multiplayer engine and shut down after five minutes. Despite those issues, its charms shone: secret areas house powerful weapons and collectible Ankh Coins, and enemies gibbed with little acknowledgement for human anatomy. (Sidenote: Exploded foes' eyeballs aren't yet sliding down the screen, though the developer promised this functionality would be added.)

It's all very familiar, though Rise of the Triad's developers have made some changes to the original game's levels. Some changes are due to the title's new, fully 3D worlds. Some are because some of the original game's levels were poorly designed — one level, designer Frederik Shreiber informed me, was lazily drawn in the shape of a letter of the alphabet. (I'm assuming that one didn't make the cut for the remake.)

How successful Interceptor is at reviving the franchise depends entirely on how much the studio can get done before the game launches later this year. In five months, they've built an extremely buggy demo — but a demo that expertly blends nostalgia and fun into a fairly enjoyable package. With its Steam support (which comes with Workshop modding functionality) and reasonable $15 price tag, that might just be enough.