'Fable: The Journey' aims to be a deep, smartly designed Kinect game

"We tried to do something more for a conventional hardcore gamer"Gary Carr, Lionhead Studios

Share All sharing options for: 'Fable: The Journey' aims to be a deep, smartly designed Kinect game

Lionhead Studios wanted to make a hardcore Kinect game in the Fable universe. Fable: The Journey uses Kinect to engage the player with precise, well-defined motion controls, and it may realize the developers' vision.

Lionhead Studios had two principal rules in designing Fable: The Journey, its upcoming Kinect-based Fable spinoff. "We didn't want to do 'Fable Party Games,'" creative director Gary Carr told Polygon during a recent demo. "The other rule we had on the wall was, 'Don't do anything that makes you want your controller back.'"

The company sought to build a game from the ground up specifically for Kinect. "We weren't going to ... re-map controls that would work probably as well on a controller," said Carr. But the developers also needed to draw in Fable fans, most of whom were more hardcore gamers who would likely dismiss Kinect games sight unseen.

So they've designed Fable: The Journey as an "interactive movie," a story-focused experience that draws heavily on Fable lore to answer some of the series' burning questions and delve into elements that have yet to be explored. The Journey offers "a new story thread that lives inside the same universe" as the first three Fable games. Carr was quick to note that The Journey "isn't taking over from those [conventional Fable titles]" — it offers a very different experience, more action-adventure than role-playing.

The problem with an action-adventure experience is that it's difficult for players to sustain the level of physical activity that such a game might require for 15 straight minutes, let alone the entirety of a 15-hour campaign. So the developers at Lionhead knew they had to make The Journey playable from a seated position. That allowed them to vary the game's pacing, alternating intense combat segments with more relaxed platforming and exploration sections, to keep the player engaged.

"We just knew that if we [didn't] design something around seated play, [there would be] so many genres of games that [could] never get made for Kinect," said Carr.

The Journey's seated technology makes action-adventure gameplay possible in a Kinect title, and the experience demands more skill than most Kinect titles.

"We didn't want to do 'Fable Party Games'"

I played through a few segments of The Journey that will eventually be released as its demo. First up was a simple calibration and tutorial, a way to introduce players to the basic game mechanics while providing Kinect with information on their body dimensions. Two people might have completely different arm angles for hurling electric Bolts at their TVs, and The Journey's opening helps Kinect take that into account so the game can provide a better experience. It's important, because The Journey is a precise experience that appears to push Kinect to its limits.

As the protagonist, Gabriel, players will have access to a variety of magic spells and abilities, each of which can be upgraded for extra firepower. The standard attack is the Bolt, a ball of electricity that you fire by making a throwing motion with your right arm. It's relatively weak, but you can throw a bunch of bolts in a short time before a cool-down timer engages. The first left-handed power is Push, perhaps the most useful ability in the game. It can function as a Star Wars-style Force Push, but it also manifests in tendrils that sprout from Gabriel's left hand. Those fibers can be used to grab objects or opponents and yank them in various directions.

The tutorial also taught three important skills. Putting either arm horizontally across your chest, as if you were holding a shield, will block incoming attacks; timing it correctly allows you to counter projectiles and send them flying toward the foes who fired them. And Gabriel's own projectile attacks are even more useful thanks to the Aftertouch ability. If you fire a shot and see that it's going to miss, you can drag your hand in the direction of your target to alter the projectile's path. This skill also comes in handy when you need to get at an enemy behind a barrier. Lastly, leaning left or right dodges incoming attacks.

Later in the demo, I learned two more attacks. To produce a Fireball, you hold up your right hand and wave it from side to side. The Shard spell lets Gabriel fling a spear forward: you cock your right arm as if you're holding a javelin and then bring your arm forward to throw it.

Each attack and ability is designed and tuned well enough for it to feel distinct, and the combat experience on the whole is wonderfully tactile. Once I learned the motions for the options available to me, I was mixing up my attacks like a pro. I tossed a few Bolts and Fireballs with my right hand, then dodged or reflected incoming arrows with my left arm. Then I used Push to grab onto the limbs of a Hollow Man shambling toward me, yanking them all off to render him harmless.

The Journey occasionally became confused when I was switching between attacks quickly. Blocking in particular seemed more finicky than the other options, and in a few cases, I did get the classic Kinect sense of "I swear I did the correct motion, but you failed to detect it." But those instances were rare, and when the game was picking up my movements well, I felt like I was Gabriel, which is exactly what Lionhead is trying to achieve.

And because The Journey is a high-fidelity experience, it can demand more from players. A boss fight with a giant troll was enjoyable because of how challenging and fair it felt, and because of its great ending: I threw a Shard to dislodge a massive sword dangling above the troll's head, and then used Push to drive the blade into the beast. The motions resemble the in-game attacks so closely that you feel a tight connection with the on-screen avatar, Gabriel, in the first-person combat.

Lionhead also wants you to feel a connection to Gabriel's horse, Seren, which pulls the buggy that Gabriel sits in. When riding in the carriage, you hold the reins to Seren by holding up your hands in front of you. Cracking the reins once puts her into a trot, and doing it again causes her to gallop. A third crack will make Seren sprint, an exercise limited by a recharging stamina bar. Turning is accomplished by bringing one arm close to your body: for example, pulling your right arm toward you and leaving your left arm out will turn the buggy to the right. You can also slow Seren down by pulling both your arms in, or stop her in her tracks by holding your arms above your head. 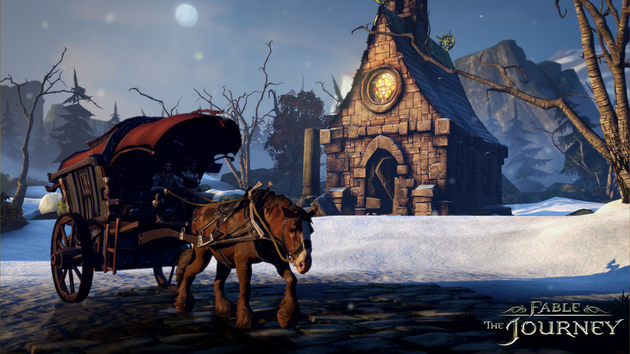 The gameplay sections in which you control Seren offer a marked contrast from The Journey's on-rails combat sequences. Your movement is still fairly limited, but you have full control of the horse, and can take detours for side quests. Seren's motion controls, like the combat controls, feel good because they make you feel like you're actually sitting in a carriage holding the reins. And here, Kinect's minor delay in responsive time even makes a bit of sense, since a horse may not always respond immediately to your instructions. It's all part of Lionhead's desire to create an emotional, "empathic bond" between you and your horse. "A horse just seemed a natural progression from a dog," said a laughing Carr, referring to the canine companion for the player character in Fable 2.

Fable: The Journey appears to be well on its way to achieving Lionhead's mission: a hardcore Kinect game that draws players into a world they know but provides a different experience than they're used to. With some tweaking to the motion detection, or with some more time spent playing the game so Kinect's machine learning can take effect, The Journey could be well worth the time.

Carr is aware of the Kinect's strengths and weaknesses, and it's the process of discovering them that he enjoys so much. "We just love playing with Kinect and experimenting with it," he told me. He continued, "I love new user interfaces," talking about his 27-year career in the game industry and how he's worked with a variety of control methods from joysticks and keyboards to motion-sensing devices. "They always throw up new genres and new types of experiences," he said. "And I love as a designer to try and see how it changes the industry, because everything leaves its mark."

Fable: The Journey will launch exclusively on Kinect on October 9th. A demo will be available on Xbox Live on September 17th.