It's doomsday for Lightning

"The game system is much more active, and the world features much more interactive environments as before," Kitase said. "Players can control Lighting as they see fit."

Players will be able to perform "exhaustive customization" of Lightning, the game's developers said in a pre-recorded presentation shown at PAX. The game's art director said he limited the visual design of Lightning's look in Lightning Returns to black and white shades, and designed the game world, Novus Partus, around three key terms: mechanical, gothic, and fantasy. 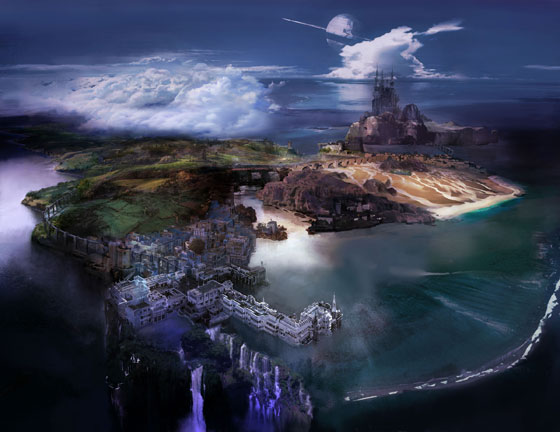 "This is the most customization you'll be able to do with a Final Fantasy character," Square Enix said, contrasting talk of Lightning's more simplified visual design. Lightning's abilities will change based on the weapons and armor she equips when heading into battle, producers said, and players will also have more control over Lightning's actions. She can now jump, hang off ledges, duck, and hide behind cover.

"The level of control is at an all new level," reps said. "You will be able to control Lightning's movements while in battle."

Square Enix showed new concept art of Lightning Returns' world, its architecture, its characters, and its monsters. But not its new gameplay in action, unfortunately.

The "unique twist" on the series centers around the concept of a "Doomsday Clock," a countdown to the end of the world. In Lightning Returns, players have just 13 days to save the world. "Every region, every locale is subjected to this clock," a Square Enix employee said, showing sunsets, nighttime scenes, and promising the opening and closing of shops based on an in-game clock. Even the game's travel system, a monorail that connects the game's four islands, will adhere to that schedule. To slow the end of the world, players will have the ability to add more time to the game clock.

At the end of its presentation, Square Enix said Lightning Returns: Final Fantasy XIII will come to PlayStation 3 and Xbox 360 in 2013. Additional details are expected in a gameplay video to follow.

The Final Fantasy team offered additional insight into the creation of Lightning Returns at an event in Japan today, which you can watch below.