"As much as I love Hawken, you don't want to be in the situation where you're making Call of Duty forever." Khang Le

Share All sharing options for: 'Hawken': From indie computer game to transmedia powerhouse

Hawken: A year and a half ago no one, beyond the team of nine working on the game, had ever heard the name. But by the end of this year, if all goes to plan, Hawken the game will launch in the eye of a transmedia storm that includes a video web series, a graphic novel, feature film and plans for an animated television show, action figures, a novel and perhaps, one day, lunch boxes.

Hawken: A year and a half ago no one, beyond the team of nine working on the game, had ever heard the name. But by the end of this year, if all goes to plan, Hawken the game will launch in the eye of a transmedia storm that includes a video web series, a graphic novel, feature film and plans for an animated television show, action figures, a novel and perhaps, one day, lunch boxes.

And it all started with a failure.

Khang Le and a group of artists, designers and developers had just been let go from an unsuccessful game development project at Intel, said Dan Jevons, chief creative officer at transmedia company DJ2.

"The story wasn't a success for them," he said. "It didn't have a happy ending."

Le said that everyone could have gone their separate ways, but they enjoyed working together and wanted to give a group effort one more try.

A console version of Hawken is definitely planned, Le says.

Where the last game the group worked on was high fantasy, this new endeavor was going to be something set in a science fiction world. The decision to create a game around mechs, giant vehicular robots, was driven as much by Le's personal interest in that flavor of science fiction as it was in practicalities.

"I love mechs and I only had one animator so I didn't want to have a lot of human characters in the game," he said.

To save time, the team decided to create a small number of pieces of art, assets that they could combine and recombine to form everything from their mechs to the cities within which they would do battle.

This approach lent the game a distinct look and made it much easier for a small team to polish the game instead of obsessing over creating a bunch of original set pieces.

"In two weeks we had rough game play," he said. "And then we kept working on that."

After nine months of work by a team of six full time employees and three interns, Adhesive Games released a gameplay trailer online.

The tremendous interest generated by the video attracted all sorts of attention from publishers and from people who saw potential in the property beyond a video game.

DJ2's Jevons said he fell in love with the property when they saw the video.

"We went to Adhesive Game's office and sat down with them," Jevons said. "They had been approached by a large number of film entities who were interested in Hawken and the rights. And they had said, ‘No, they didn't need to get a film made, they didn't want to get it made.'"

But Jevons and DJ2 CEO Dmitri Johnson had an intriguing pitch: They didn't want to treat the game as the starting point of a chain of properties, instead they wanted to help create properties based in the universe of Hawken. Each creation, from movie, to book, to video game, would have equal weight.

"We want to take a core IP and create each property as a spoke, and treat each spoke with the attention it needs to be successful," Jevons said. "A graphic novel, film, television show, video game, should all be treated with equal weight; all built upon the core canon."

In theory, that means one failure won't pull down the entire universe, but successes will help strengthen it.

Over the course of a three to four hour meeting, the DJ2 duo convinced Le and his group that it was a good deal and secured the rights to make a film. Shortly thereafter game publisher Meteor Entertainment signed on to publish the game.

Despite the growing passion among gamers surrounding Hawken, DJ2 faced one huge problem with turning the muliplayer-only, free-to-play computer game into a transmedia powerhouse: The game had no backstory.

Jevons came in and extrapolated a 200-page Hawken "bible" from two to three pages of fiction.

"The fiction was pretty thin," Jevons said. "It was two or three pages outlined, really just mechs fighting each other."

DJ2 came in and extrapolated from that outline to flesh out not just a single story, but an entire universe, a Hawken "bible."

"Dan (Jevons) basically locked himself in a dungeon and laid out this master blueprint about how we can use all of these pieces of media and each be it's own part of content," Johnson said.

The result was a more than 200 page story bible that detailed a Hawken universe with a past, present and future, characters within which to ground the game's mythology and hang things like books and films off of.

Jevons also created what was essentially the outline for a trilogy of main stories which could each be fleshed out to be turned into major properties.

"These are sort of world-changing narratives," he said, "major shifts in power and technology. They are the equivalent of Star Wars four, five and six."

He also created a number of smaller stories that could easily fit horizontally into these major tent-pole narratives.

Armed with the rich look of the game, an aesthetic that Le once described as post-apocalyptic Hello Kitty and inspired by his love of mechs and a childhood in Saigon, Vietnam, and a narrative bible designed to host not just a trio of major works but a slew of smaller ones, DJ2 set about landing deals.

And it didn't take long. 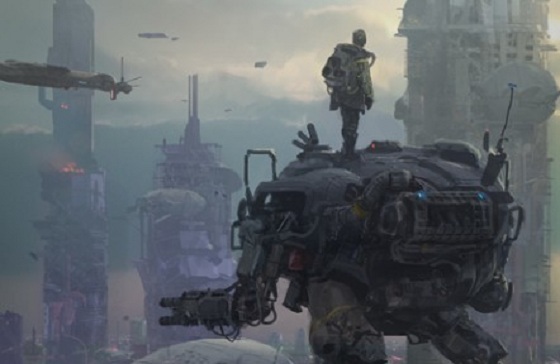 In March, the group announced a Hawken graphic novel. In April, a series of digital live-action shorts were announced for Hawken backed by Warner Premiere. In July, after garnering a slew of awards at video game show E3, the developers announced a feature film that will be written by Jevons and helmed by Scott Waugh, who directed Act of Valor.

Despite the major transmedia successes, Jevons still sees the universe, not one single property, as the most important element for Hawken.

"The point of the graphic novel and movie is to try and expand it beyond the initial core audience," he said.

The release of the graphic novel, a planned digital comic and a book are all tied to the Dec. 12 launch of the game. A game, Jevons believes, that has a very long life as a free-to-play title.

The feature film and web series both have looser scheduling because the production is tougher to dictate, he said.

Waugh tells Polygon that he's not worried about the reception of game or web series impacting his chance of getting the film picked up.

"The world they created around Hawken allowed for infinite possibilities because the problems that exist in 2012 will always be relevant from now to eternity," he said. "We hope our immersive filmmaking style, as in Act of Valor, will put the audience into the world of Hawken, giving everyone that interactive experience but then transcending that with a human story that is grounded, authentic and compelling."

Waugh sees in Hawken the same sort of blending of humanity and science fiction that made Star Wars so popular.

"The two properties are similar to me because they both embody where the future is headed, but maintain a story based on humans' wants and desires," he said. "Simple human stories placed in complex worlds."

Perhaps that's why so many people seem so interested in getting a piece of Hawken. Jevons was already talking with me about high-end Hawken toys, the ability to 3D print mechs for players, and even Hawken lunch boxes. He thinks the attraction is driven by a fascination with giant robots and walking tanks.

"There is something cool about getting into a weaponized suit of armor," he said.

Le, who's shot in the dark creation seems on the verge of building an empire, is both elated with the transmedia interest and a little frightened of it.

He laughs, perhaps a little nervously, when I ask him if he worries that Hawken will be both the first and last game he makes, not because of its potential failure, but its potential successes.

"That's exactly what I worry about sometimes," he said. "As much as I love Hawken, you don't want to be in the situation where you're making Call of Duty forever. As a studio we have ideas of what we want to do next and it will be very different from Hawken."