EA considers the next generation, Origin and the importance of change

Share All sharing options for: EA considers the next generation, Origin and the importance of change

As head of development for one of the largest video game companies in the world, EA's Frank Gibeau has to pick his way through a minefield of secrets when talking about unreleased, unannounced future gaming technology.

In a recent interview with Polygon, Gibeau categorically refused to discuss the successors to the Xbox 360 or Playstation 3. But what he didn't say about those impending devices, and what he did say about the company's future helps to better frame the expectations gamers should have for the next generation of consoles.

Gibeau talked about the developer's commitment to this generation of consoles once the new systems hit, how he doesn't see physical game discs completely going away despite the growth of download sales, about EA's push to evolve and improve free-to-play games, and how the online Origin service is the future of the company.

Change is invaluable to entertainment

Change, Gibeau tells me, is invaluable to entertainment.

Half an hour earlier, Gibeau was up on stage at the New York Game Conference in a mostly full theater at the Museum of Jewish Heritage, having a chat with Mike Vorhaus, president of Magid Advisors about the future of gaming.

Vorhaus wanted to know about those next-gen consoles, the ones not yet announced by Microsoft or Sony, but endless talked about online. But Gibeau ducked the questions, instead talking about the impending transition between consoles.

"It's pretty choppy out there right now," he said. "We're going through a transition from one generation to the next. You're seeing a lot of changes you've never seen happen before."

Later, when we meet in a backroom, I ask Gibeau why transitions are so important to the video game industry.

"You have to stay ahead of the curve to delight and inform," he said.

People become bored with the routine, he tells me, they need to be re-energized occasionally, and be reminded of why they love to play video games.

Transitions are great for doing that, he said.

EA is reluctant to release new concepts on an aging platform

A transition, by definition, means not just moving forward, but also leaving the past behind. Gibeau has said that Electronic Arts is reluctant to release entirely new video game concepts on an aging platform. But, I asked him, why can't a new IP come to a system that could be replaced in a year?

"In theory it's possible," he said. "I think the challenge is that you have a finite number of resources in a company and you can only do so much. You have to pick your battles. If you look at what EA is really interested in right now it's the transition, it's the mobile, the social, it's play-for-free and PC."

He said when making a decision about what generation of platform to bring a game to, EA looks at whether they can innovate with the known games or whether they need to come out with something completely new.

"In theory, yes you could do that, but if you handicap that versus other things you could do, it might be lower priority," he said.

But that doesn't mean that EA has already shifted most of its attention to those new future consoles, which EA refers to as gen4, he said.

"I think if you look historically," he said, "when they introduced generation three, generation two hung around for a very long time still. So I think it's safe to say that gen3 has many years yet to go in front of it, and you'll see experiences there from Electronic Arts that will be new and novel."

The future of Origin in next gen entertainment

And Gibeau was clear that those experiences, both for current gen and next gen gaming, will be increasingly tied to Origin, EA's online story and gaming service. The Origin service, which went live last year, includes an online store for EA's games and cross-platform social features.

During his on-stage talk, Gibeau said that Origin is evolving into what EA hopes will become its own ecosystem.

Historically, he said, the console business was a war of hardware, now it's a war of ecosystems. Those systems include Xbox Live, Playstation Network, iTunes, Steam, soon Windows 8's Windows Store, and Origin. 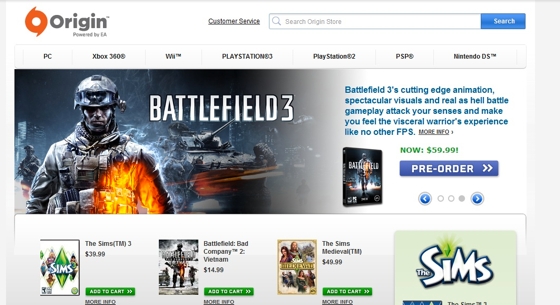 "EA has transitioned from a content-only company to a content/platform company," he told me later. "I feel like the next five years are going to be largely defined by the battle of the ecosystems. It's important for us to have our ecosystem. If you look at attributes of an ecosystem, it's: How many users do you have? How good are your relationships with them? Do they perceive it as a positive experience? Do they tell there friends about it? How viral it is?

"Those are all really important attributes for any platform be it iTunes or Facebook or Xbox Live or PSN."

Origin fits into that neatly, he said, but also has the ability to operate within other ecosystems, "ebbing and flowing" based on where the service is being used as a third-party system.

"So on Xbox Live it has a different manifestation then if it's on the wide open web," he said. "So it's fundamental to who we are as a company going forward for sure. Just as when Valve launched Steam they became a different company with Steam. Because before that they were just a software developer."

"There is still a lot of things we need to get better at."

Gibeau also acknowledged that the system was still a work in progress.

"There is still a lot of things we need to get better at," he said. "We need to listen to our customers."

While Valve's Gabe Newell has been vocal about his dislike of Windows 8, Gibeau seemed unconcerned about the operating system's pending launch.

Will Origin be in the upcoming Windows Store when Windows 8 launches, I asked?

"All I can say is that we're multiplatform and we publish on everything," he said. "Where it makes sense for us, we'll do it and when it doesn't make sense, we won't. We're building an Origin store, an Origin platform, an Origin social network that works on the PC. So you can see where we are going with it. Apple has a store... to me (the launch of the Windows Store) is just a fact."

Another fact of future gaming is the growing importance of downloadable games, a system, I point out, that can cut out the middleman and net publishers like EA better margins. Do those higher margins entice a publisher like EA to try and move away from retail sales?

"From our perspective we do make more money on our own direct downloads, as does everybody else," he said. "But there are really efficient ways to distribute games at retail that don't work for all games because some have very large files not everyone can download. Not everybody has the harddrive space. Not everybody has the right connection speed."

Games like Guild Wars 2, which had to temporarily freeze online sales to lessen server loads, seem to prove Gibeau's point. He added that EA has no intention of dropping physical game sales anytime soon.

"Delivering a product through retail is extraordinarily efficient for certain types of customers," he said. "As long as there is one customer in the world who wants to buy FIFA on Blu-ray at retail, we'll do it. But at the same time we're not going to ignore the fact that there is a huge audience that is consuming digital version of games."

"As long as there is one customer in the world who wants to buy FIFA on Blu-ray at retail, we'll do it."

There's also a growing audience to be found in the ever-evolving realm of free-to-play games, which are rumored to be an important piece of next gen gaming.

"I think that three core growth drivers in the interactive business is going to be mobile, PC free-to-play, and console," Gibeau said. "That's what's going to drive this industry. How they overlap, are complimentary, and converge, is yet to be determined. I think that the guys how have 25 to 30 million person audiences in their online communities, like Xbox Live and PSN, are definitely looking at (free-to-play). I cant speak for them, so I don't know what they're going to do. But from our perspective, if the opportunity presents itself for us to bring a free-to-play experience over to the console, we're ready. We can do it and we'll be in position to do it." 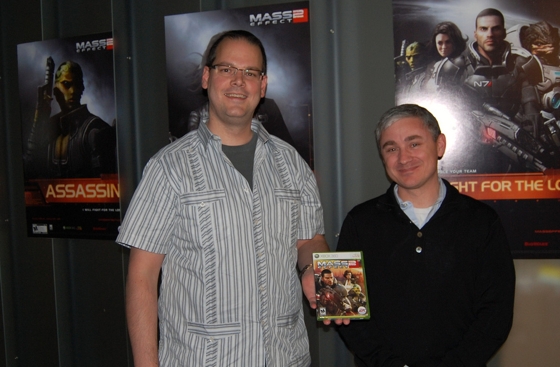 If it makes sense for upcoming free-to-play title Command & Conquer to go to Xbox Live or the Playstation Network, he said, EA will definitely do it.

"We can happily be in the status quo that currently exists, we're not pushing it one way or another," he said. "As it evolves based on how consumer behavior changes we'll be in a position to work on both."

And Command & Conquer is EA's attempt at showing they can do triple-A, free-to-play video games.

"Free-to-play doesn't mean it's not triple A," he said. "What's really crazy right now is the amount of business model innovation that's happening. Just a few years ago smart phones were a premium only business now they're all free to play. Freemium is the dominant business model just in terms of number of transactions and size of audience engaging it with games."

EA and the push to free-to-play gaming

By succeeding at free-to-play, Gibeau says, a company can then reinvest in building more games of all types. Just like downloadable content and expansion packs allow a publisher like EA to keep online support for a game alive longer.

"We have very core fans of Mass Effect 3 that if we weren't doing some of these things it would be very hard for us as a business to continually tell more stores in the Mass Effect universe," he said. "So it's a chicken and egg type of situation, the fact is it's in our best interest to keep the games alive as long as possible because of how much we have to invest in them. If weare able to succeed in delighting and keeping fans engaged over a longer period of time it allows us to tell more stories."

EA also understands that there is a delicate balancing act in terms of creating and monetizing free-to-play games.

Finding a way to satisfy "wallet warriors" without disenfranchising those gamers who want to earn through skill and time, is key to making these sorts of games work, Gibeau said.

"That's where you really have to craft the balance and that's where you can totally destroy a free-to-play experience, by getting that balance wrong," he said. "The cool thing about free-to-play is that you can get people who don't want to spend a lot and you can get whales that are perfectly happy to spend as much money as they want because they can get what they want."

It's an expanding ecosystem

Electronic Arts' interest in free-to-play and in mobile is driven in a large part by an understanding that not all gamers have access to consoles.

That nexus, Gibeau believes, will be most powerful when it includes mobile, where he sees PC gamers and console gamers often also gaming.

Mobile gaming, what Gibeau defines as gaming on tablets, phones, 3DS or Vita, offers EA a chance to expand the ecosystem the company has been trying to build out with their brands and with Origin.

It's a chance, Gibeau says, to keep gamers in the experiences of their favorite games no matter where they are. And a place where, ultimately, Origin could excel.

Find The Smith in the Barracks – Diablo 2: Resurrected

By Toussaint Egan and Polygon Staff

Castlevania Advance Collection brings with it the series’ best game (sorry, Symphony of the Night)