At a press event today, Activision showed its latest custom big box controller in the form of a gun that reads the player's nervousness and converts it into gameplay.

The event was set up to show the latest two games in the Cabela's hunting series — Cabela's Hunting Expeditions and Cabela's Dangerous Hunts 2013, with the former leaning towards strategy and the latter playing more like an action game.

Most eyes there were focused on the new gun created for Dangerous Hunts 2013. Called the "Fearmaster," it includes two metal panels near the hand positions checking the player's heart rate, and an infrared sensor on the scope checking the gun's steadiness. Combined, these tell the game how nervous the player feels, which changes the controls in very game-like ways: the screen gets blurrier when the player is frazzled, animals' vitals appear on the screen when the player is calm, etc. Players can even earn a slow motion bullet time effect by keeping their heart rate low. 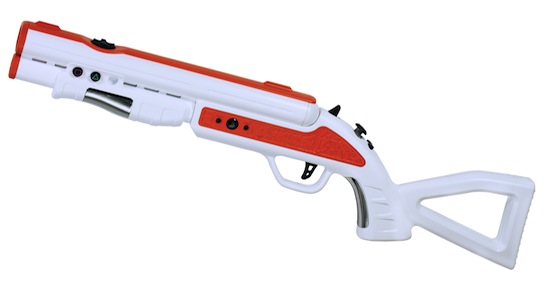 This means you see a heart rate number and heart monitor status meter in the lower-left corner of the screen whenever you zoom in. The rate can go as high as 140, and the current low record amongst the development team is 37; in general the challenge is as much restraining yourself as it is aiming accurately.

The game's enemies play into the the same idea of staying calm — if you come across a group of animals and take out the alpha wolf or lion first, their friends scatter, while if you attack one of the others first, they all attack you.

In practice, the heart rate feature seems to work well — ramping up when you move quickly, and ramping down when you relax — though it's questionable how much this will matter when playing at home and not going out of your way to test its flexibility. The developers claim the system will work on a subtle level for players who play legitimately. 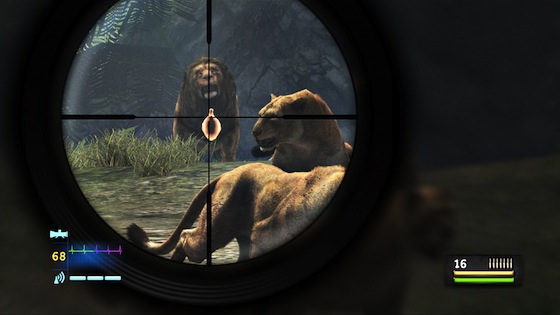 For players not interested in these features, you can also turn them off and play Dangerous Hunts 2013 like any other hunting game. (You can also use a gun from a previous year's version of the game.) In a weird side effect, this actually makes the game easier since the 'punishment' from raising your heart rate doesn't factor in anymore. Easier, but less exciting. Along those same lines, at the event Activision staff chose to switch to normal Xbox controllers to demonstrate the game's multiplayer mode, given its faster pace.

Notably, the heart rate steady hand technology is only available in the PlayStation 3 and Xbox 360 versions of the game of the game, which will retail for $79.99 with the gun. The Wii and Wii U versions will be otherwise similar, and will cost $59.99. Confusingly, the Wii version of the gun is also called the Fearmaster.