'Ni No Kuni' is more than just looks

Share All sharing options for: 'Ni No Kuni' is more than just looks

Level-5 and Studio Ghibli have teamed up to highlight their strengths in Ni No Kuni.

It's incredibly easy to be instantly charmed by Ni No Kuni: Wrath of the White Witch. The game is, after all, gorgeous. But there's a surprising amount of depth hidden beneath some of the best art design the RPG genre has ever seen.

That Ni No Kuni looks great should come as no surprise. It was envisioned by the minds over at Studio Ghibli (whose output includes such anime classics as My Neighbor Totoro, Howl's Moving Castle and Spirited Away) working with Level-5, the studio behind the Professor Layton franchise. The common thread in all of the above? Incredibly charming art design.

Ni No Kuni's art design is equally up to the task, as trailers and screenshots of the game can certainly attest. But what's harder to absorb is the clever combat system at work. It's one that manages to be surprisingly inviting for a Japanese RPG while still offering plenty of depth. 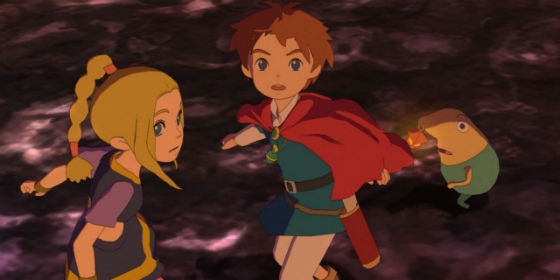 The combat system in Ni No Kuni is active and takes place in real-time. Players start each battle in control of Oliver, the title's protagonist. Oliver is an aspiring wizard in this fantasy world, which makes him pretty pathetic in a toe-to-toe bout. But his fragility is balanced by his expertise with magic. Spells can be selected from an action menu, yielding tossable fireballs or healing chants. Oliver's other, more important skill worth paying attention to: He can summon beasties to do battling for him.

Comparions to Pokemon games come quick to the mind when mentioning the ability to summon small monsters to do battle, but Ni No Kuni's active combat systems mean that you're directly controlling every monster you summon. You can move them around each 3D battle area and, just like Oliver, they can dish out attacks, cast spells and defend themselves. They each have strengths and weaknesses and the game will end if one of them falls in battle, so they're as important as the hero.

When considering Oliver and his companions, you begin to realize the complexity of the combat. Oliver can choose to summon a creature which has improved melee abilities, or he can decide to hang back and deal the damage himself with direct spells. Things get far more difficult once you start including Oliver's party mates, each of whom have their own collection of summonable creatures. Once you hit the maximum party size of three you've got three characters you can directly control, each of which has their own summon to directly control. It's a little daunting, but Ni No Kuni is smart to slowly ease players into the system with just a few variables at the start.

Adding to the tactical combat options are "gold glims." During combat, golden, sparkly balls may fall from a monster's body and land somewhere on the battlefield. Running into a gold gilm instantly refills a player's health to maximum and gives them an ultra-powerful magical attack to use for free. The balance, of course, is the inherent danger of running, willy nilly, into the heart of battle to score a gold glim. To make the matters even riskier, gilms only stick around for a short period of time. If things are looking desperate, it may not be a bad idea to make a gamble to save yourself. These are the sorts of engaging choices you're making in the midst of Ni No Kuni's combat.

Japanese RPGs tend to be daunting to newcomers. Overly complex battle systems piled atop indecipherable storylines make for a rough trail if you're unfamiliar with the franchise. Thanks to its visual style and inviting combat system, Ni No Kuni seems to go down smooth. Whether that'll extend to dozens of hours worth of engaging gameplay is hard to say after just a short playthrough, but it's certainly a step in the right direction.

Fantastic Beasts: The Secrets of Dumbledore suddenly releasing in April