Share All sharing options for: 'Tekken Tag Tournament 2' for Wii U has Nintendo's blessing, Mario's overalls

New details on Tekken Tag Tournament 2 for Wii U.

Tekken producer Katsuhiro Harada says the Wii U version of Tekken Tag Tournament 2 is designed to perform much like its PlayStation 3 and Xbox 360 equivalents. That means the same number of characters, the same modes, and the same two-on-two tag team battles.

But seeing Paul from Tekken wearing a full Mario costume, a bright red hat resting on his huge hair stack, and Steve Fox in a Starfox costume makes the Wii U version feel immediately superior.

Costumes for Luigi, Ganon, and Link will also be available, and Tekken producer Katsuhiro Harada says additional costumes are still to be announced. (He did, however, rule out the possibility of a Kirby outfit.)

Harada did say the Wii U version may include Nintendo-themed items and accessories in addition to the cosmetic costumes.

The Tekken team is considering Nintendo-themed Tag Throws for the game, Harada said, but fears being restricted by Nintendo because of their violent nature.

"It is kind of an interesting thing to explore, and we have some ideas about that... but we might get yelled at by Nintendo," Harada said through a translator. "We would like to try some violent features, like raising poison mushrooms below the stage, then smashing your opponent's face in the mushrooms."

Tekken Tag Tournament 2 for Wii U also contains a remix of classic Super Mario Bros. music. "We do use some of the sound effects and remix the music," Harada says. "These were things we really wanted to do and we didn't think Nintendo would be OK with it, but they were very cooperative." 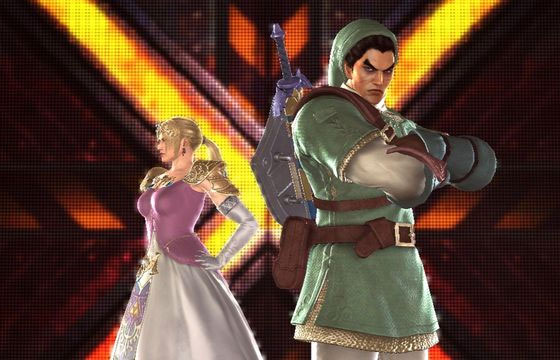 The game's Nintendo-themed costumes will be exclusive to the Wii U version of Tekken Tag Tournament 2, as will Mushroom Battle mode. Mushroom Battle fills fighting stages with Super Mario Bros.-themed power-ups: mushrooms, super mushrooms, poison mushrooms, and super stars. Collecting one of the randomly bouncing power-ups will make your fighter shrink or grow - sometimes to a comical size larger than the screen.

Fighters who have grown to those enormous sizes will do increased damage to their tiny opponents, but many of their moves that hit high or at mid-level will swing and miss. Harada says the mode breaks the ground rules of Tekken, making it an entertaining diversion to play with a friend.

The Wii U version of Tekken Tag Tournament 2 will also differ in its use of the GamePad's touchscreen. Players will be able to program a handful of shortcuts that can be utilized via the touchscreen, making it easier to pull of difficult combos and moves.

Harada says the Tekken team has "other cool things planned" for the Wii U version, but did not elaborate.

In the build of Tekken Tag Tournament 2 Wii U Edition that we played in Tokyo, characters like Angel and Michelle Chang were already unlocked, but no every character had an alternate Nintendo-themed outfit. The game played nearly identically to its PS3 and Xbox 360 counterpart, with the exception of the particular quirks of the Wii U GamePad and Classic Controller Pro, both of which performed admirably during our quick play tests.

For players who would prefer something other than the standard controls, Harada says he's "hoping to bring out something" for the player who prefers an arcade-style fight stick.