Share All sharing options for: 'Metal Gear Rising: Revengeance' pits Raiden against Gekkos and a robot dog at TGS

If the latest gameplay demo of Metal Gear Rising: Revengeance is any indication, Platinum Games has created another stellar, extremely challenging action game, blending lightning fast combat with a touch of stealth and tons of style.

The Tokyo Game Show demo of Metal Gear Rising: Revengeance opens in a VR Mission-style training room, a refresher for Raiden that instructs him on the ways of slicing and dicing. After chopping up a half-dozen virtual cubes into tiny bits, Raiden moves into another training room filled with holographic firing range targets.

From there it was on to an extended cut scene — a Kojima Productions specialty — with Raiden flying a glider toward an island base. After some extended dialogue between Raiden and his compatriots at private military contractor Maverick Security Consulting, he's launched onto a beach. Raiden lands thunderously, creating a shockwave and water spray, an entry reminiscent of Solid Snake's landing on the USS Discovery in Metal Gear Solid 2.

"The most important concept for this game is to move forward."

When in Blade Time, if Raiden cuts through a soldier at the right spot — illustrated by a glowing square marker — he can snatch their cybernetic spine from their diced up body, rip it out, and crush it, all before the flying body parts hit the ground.

Taking on Gekkos, the bipedal Metal Gears that leap and kick, is harder. Once spotted by a Gekko, they'll bear down on Raiden, attacking with sweeping leg kicks. When those legs glow orange, Raiden must counterattack, parrying with his sword. Do enough damage to a portion of the Gekko and that section will be highlighted with a blue glow, an indication that Raiden can attack it in Blade Time.

The combat mechanics feel infused with Platinum's expertise, but Revengeance differentiates itself from past efforts like Bayonetta by forgoing any sort of dedicated dodge mechanic. Platinum Games' executive director Atsushi Inaba tells Polygon that the original goal was to keep Raiden on the offensive. 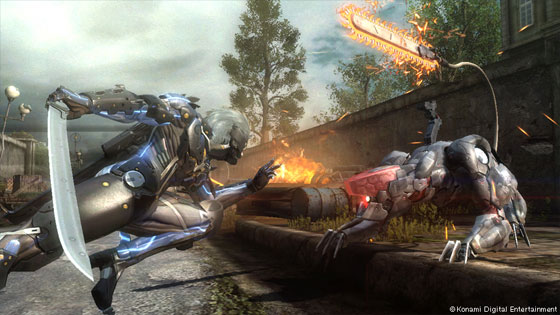 "The most important concept for this game is to move forward," Inaba said. "Because of that we didn't want Raiden to run away from or dodge things. He will instead receive the attack tactically and get closer to the enemy."

"Even while we were talking about the [gameplay] concept on paper, that was always the idea," he said.

Despite the focus on offense and close quarters slicing action, the Tokyo Game Show demo could be played in stealth mode. It's possible to avoid detection of the Desperado Enforcement soldiers and Gekkos completely, with the option to use stealth kills on both enemy types.

The Tokyo Game Show demo concludes with a battle against LQ-84i, the talking, dog-like android that attacks with a chainsaw at the end of his tail. The fight against LQ-84i is intense, as he leaps quickly at Raiden, disorienting him and thrusting his chainsaw through Raiden's torso. Nailing the timing on counterattacks is challenging, particularly on the busy TGS showfloor.

While we weren't able to take LQ-84i down — but not for lack of trying — it appears he and Raiden will eventually settle their differences and team up, as the Gamescom trailer for Metal Gear Rising: Revengeance teases.

We'll find out more about Raiden's action-packed adventure when Metal Gear Rising: Revengeance ships next year. The game is due to hit the PlayStation 3 and Xbox 360 in North America on February 19th, 2013.