Developer Treyarch is blowing the bloody doors off Call of Duty: Black Ops 2's multiplayer suite. It's ditching established Create-A-Class rules for multiplayer class customization. It's doubling down on eSports and skill-based league play. It's even bringing competitive multiplayer to its popular Zombies spin-off mode.

But the Santa Monica-based developer, once widely regarded as the back-up Call of Duty team, is doing more with multiplayer in Black Ops 2 than anyone else. It's doing it more thoughtfully, making online multiplayer more approachable, more customizable than ever.

Treyarch promises a hefty suite of new and returning multiplayer game modes, including well-worn standards like Team Deathmatch, Domination, Capture the Flag, Domination, and Search and Destroy. Kill Confirmed mode, the popular dog tag-grab from Modern Warfare 3, will also return. New in Black Ops 2 is Hardpoint, a team-based mode "inspired by traditional king of the hill" gameplay. During Hardpoint matches, the game will call out a hotspot for players to sprint to, capture, defend, and then move on to the next.

"It's total chaos and super fun," said Treyarch game design director David Vonderhaar. He listed Hardpoint as one of the multiplayer modes that supports (and shines in) multi-team matches, which can see up to six teams battle it out at once. Team Deathmatch and Kill Confirmed also support multi-team gameplay.

"There's just so much going on, that it's just too big to have one reveal."

Wager Matches will return from the original Black Ops. This time, they're called Party Modes. Featured in Black Ops 2 are Gun Game, One in the Chamber, Sharpshooter, and Sticks and Stones.

Vonderhaar says Party Mode matches are still "just for fun," but that these gametypes are also part of the core multiplayer system. Experience points and ranks acquired in Party games will count toward a player's regular progression.

Treyarch is also baking in a long list of custom game modes for Black Ops 2 multiplayer, which play with the core and Party game modes. Custom game makers can build out default and custom classes — outfitting every player with rocket launchers, for example — add bots, restrict certain items or weapons, and even toy with the "Pick Ten" Create-A-Class rules. Want some raw, straightforward Call of Duty? Change it to "Pick Three." For a more chaotic experience, customize the ruleset to "Pick Seventeen," turning each player into a well-armed super soldier.

New custom game rules let players "put on the game designer hat," says Vonderhaar. "I'm totally fine if someone thinks they can do a better job than us." 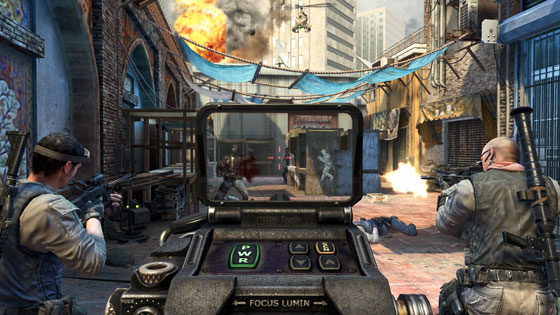 Back to school with Bootcamp and Bot Stomp

Combat Training, the offline mode designed to acclimate players to online multiplayer by matching them against bots, also returns. It too has been rolled into the core game experience, offering full multiplayer progression up to level 10 in Bootcamp mode, one of three Combat Training gametypes. Bootcamp matches are six-on-six battles, with each team comprised of three humans and three AI-controlled bots.

"We can dial up or down the difficulty of these bots," Vonderhaar says, to help players improve their multiplayer skills. He calls Bootcamp a "great place to get a handle on" Call of Duty multiplayer, because the bots "don't yell at you or call you names."

"We're making sure that we have an experience for every single type of player we can imagine."

Once players have graduated from Bootcamp, they'll have access to Combat Training's Objective game types —Domination, Demolition, and Capture the Flag, but not Search and Destroy — which are also played with a mix of human beings and bots. While players can still accrue experience in Objective gametypes in Combat Training, they'll do so at half the normal rate.

"Why would you do such a thing?" Vonderhaar questioned. "Well, it's pretty fun to kick a bots ass. The entire point is to demolish the AI and practice team tactics."

Combat Training has been bolstered in Black Ops 2 to aid both the uninitiated and intimidated, Vonderhaar says. Despite Call of Duty's enduring online multiplayer appeal, "there are a lot of people who don't play online multiplayer," according to Treyarch. "And that bugs the shit out of us." 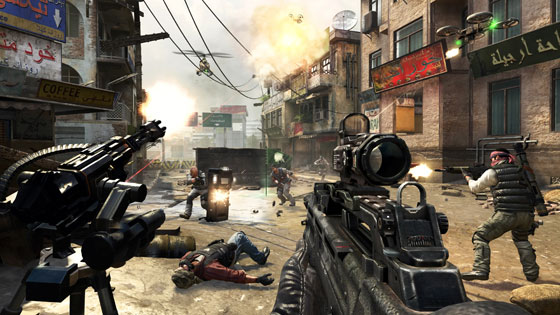 For the diehard Call of Duty players who immerse themselves in the series' online multiplayer, Black Ops 2 will offer an unprecedented amount of gameplay options, customization, and long-term rewards. Treyarch is including more than a thousand multiplayer challenges that dish out XP bonuses and cosmetic customization items. Those customizations include special camouflage textures for guns, an extensive emblem editor, unlockable backgrounds, and special holographic weapon sights. Two holographic sites Treyarch seemed particularly proud of were the handlebar moustache optic and a biohazard optic inspired by manufacturer EOTech's XPS2 Zombie Stopper.

"We wanted to make sure players get rewarded for branching out of their comfort zone," explained Vonderhaar. "Some are easy, some are challenging, but with all of them you're working towards rewards, not just experience points."

"Trade all your stats for an icon? That's just cruel."

Treyarch has also reconsidered the Call of Duty series' Prestige rankings. In Black Ops 2, when players reach the maximum level rank of 55 during the normal player progression, they'll have some options when hitting Prestige. Rather than just scoring a sweet-looking emblem for bragging rights and reseting all their stats, Prestige in Black Ops 2 will be a continuation of your progression, says Vonderhaar.

When players Prestige, they'll unlock new Prestige-level challenges. They'll also receive a special unlock token, one which ignores level gating requirements and unlocks an item of your choosing. At each of the ten Prestige levels, players will have a choice to unlock an extra Create-A-Class slot; get a refund on all the unlock tokens they've spent throughout player progression, essentially a chance to re-spec your character; or completely reset all their stats, like classic Prestige ranks. At level 10 of Prestige, everything will be unlocked for the player.

Of course, players will still get those sweet-looking Prestige emblems, each adorned with skulls, snakes, boars, and scorpions, a visual warning to other Call of Duty players that you're bad-ass. 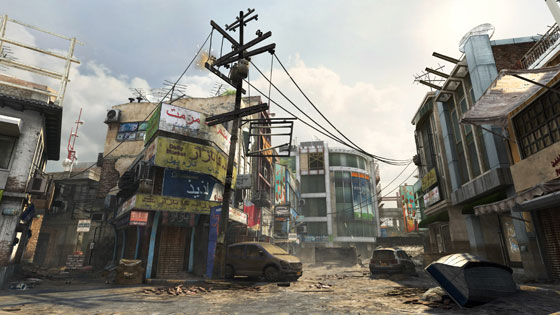 In addition to that long list of new additions coming to Call of Duty multiplayer, Treyarch gave us a chance to test out three new maps.

Pictured above is Overflow, a map set in Peshawar, Pakistan. Its structure is rather chaotic, with trashed car chassis scattered throughout a map woven with back alleys and makeshift architecture.

Hijacked drops players onto a cruise ship that has a series of parallel lanes running through its center and is relatively flat. There's little visibility of the far end of the map, despite its mostly level playing field. There are also hot tubs.

Finally, we played a handful of matches of Demolition and Kill Confirmed on Express, a map set in a Los Angeles bullet train station. There's an environmental danger in Express, a high-speed train that will occasionally shoot through the map, crushing players unlucky enough to be in its path. Treyarch says environmental dangers like this — and the moving shipping crates in the map Cargo — can be turned off to eliminate randomization in matches.

For now, we think that's pretty much it for Call of Duty: Black Ops 2, lest Treyarch have even more multiplayer features it has magically stuffed into this already massive game.

Call of Duty: Black Ops 2 will be released on Xbox 360, PlayStation 3, Wii U, and PC in November.