Share All sharing options for: Iron Galaxy CEO on poor 'Wreckateer' sales and the 'Kinect tax' on reviews

Polygon caught up with Iron Galaxy Studios CEO Dave Lang following his talk at Chicago's chapter of the Independent Game Developers Association with Josh Tsui of Robomodo, to speak with him about his Summer of Arcade-featured game.

During the panel, Lang said that the slingshot Kinect game published by Microsoft "wasn't a financial windfall for the studio."

"I think everyone's disappointed," he said. "I don't think to this point, anyway, that Wreckateer has been a financial success even with Summer of Arcade. Financially, I don't think they're pointing to it and saying that was a good bet."

Despite the poor sales, Lang says that neither his studio nor Microsoft are giving up on the title just yet.

"The one great thing about Kinect games is they do have a much longer tail," he said. "They don't follow the same sales curve as traditional Xbox Live Arcade or retail games. 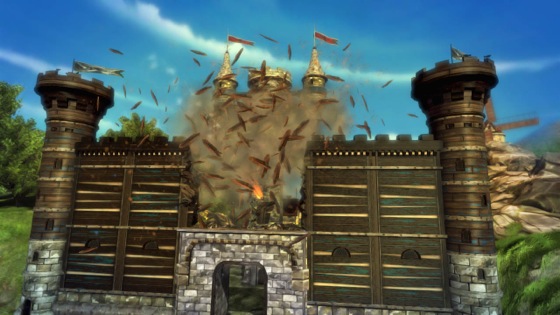 "Microsoft is absolutely committed to the title, and they're doing some cool stuff to give it another shot in the arm. It's not the kind of situation where Wreckateer came out in Summer of Arcade, performed poorly, and the publisher sweeps it under the bed. They're going to keep banging the drum, there's going to be a lot of cool stuff you'll hear about probably for the next year or so."

One of those options, Lang says, is downloadable content.

"I'm not sure what's going to happen there, but there have been discussions," he said. "We do have a lot of cool ideas, and I hope we get to do them. That'd be neat."

The game's poor sales were matched by wildly varied reviews, something that Lang says were in line with expectations.

"I would do it again given the right opportunity, for sure."

"Kinect games are just tough," he said, adding that some players and reviewers dislike using the Kinect peripheral, and that it comes out in the review scores. "I think Microsoft calls it the 'Kinect tax' when it comes to those kinds of things."

Despite the response to Wreckateer, Lang says he remains interested in how he can create games for Kinect.

"People crack our game for being 'Angry Birds Kinect,' and I get why that comparison is made. I made it myself," he said. "But when you're making that game and figuring out how to solve for first-person aiming, there's nothing you can go and look at. You have to solve all of those problems for the first time, and that's what's super-exciting about it.

"I would do it again given the right opportunity, for sure."

Iron Galaxy continues its work on other projects, having just handled the Xbox Live Arcade and PlayStation Network versions of classic fighter compilation, Marvel vs. Capcom Origins, plus the studio is bring Twisted Pixel's Ms. Splosion Man to mobile devices and working with Epic Games on an unannounced project.