The Banner Saga is a strategy-RPG that makes stats matter

"In Final Fantasy Tactics, you're basically looking at them saying, 'I want to do a bigger fireball.'" Arnie Jorgensen, Stoic Games

Share All sharing options for: The Banner Saga is a strategy-RPG that makes stats matter

Stoic Games' Kickstarter-funded strategy RPG The Banner Saga is cut from a different cloth than its predecessors in the genre. That much is evident at first blush; just by looking at the game's stark, bright characters and backdrops — an art style inspired by Eyvind Earle's work on the original Sleeping Beauty — you can tell that it's not like most other strategy games, which feature busy battlefields and even busier user interfaces.

But when you get down into the guts of Banner Saga, and dissect the brains upon which its strategic battles are precariously built — that's where the real differences lie.

When Banner Saga launches later this year, it won't include a single-player campaign — that mode will be in development until early next year. Instead, the initial, November launch will only include a free-to-play competitive version of the title called The Banner Saga: Factions. This mode allows players to collect troops, create six-strong battle parties, and duel against an opposing army.

The focus on competitive combat was not in the initial design for Banner Saga, Stoic creative directors Arnie Jorgensen and Alex Thomas told Polygon.

"When we formed the company, I don't think we planned on doing multiplayer at all," Thomas said.

"This combat was the most delicate system we had to put in the game," Jorgensen added. "So we said, 'Let's focus on combat first.' As we were tackling it, we thought, 'This is a blast, let's offer this to people while we continue making it.' The Factions game is basically our attempt to roll in content, art content and combat that will be in Chapter 1, into the game early so people get used to our world. We see it as a prologue to the saga." 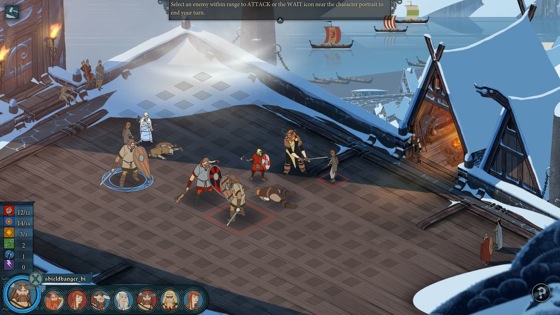 The three founders of Stoic Games (Thomas, Jorgensen, and technical director John Watson) ran me through the intricacies of The Banner Saga during a visit to their studio; a one-room, retrofitted goat shack, sandwiched between a beer garden and farmer's market on the north side of Austin. It's a unique place for a team to operate out of, but they could be onto something. When you're in the room, you feel totally embedded in The Banner Saga, as the entirety of the game's development — storyboards, concept art, milestone calendars — is plastered across its cardboard-thin walls.

The combat which serves as the game's centerpiece is deceptively simple. Each combatant has a Strength stat, which serves as their attack power as well as their health; and an Armor stat, which mitigates damage done to Strength. Almost every attack and skill in the game can target one of those two main scores, making each strike an important decision: Do you weaken their attack power while bringing them closer to death, or help a teammate set up an even more powerful strike in the future?

Other stats are equally valuable, such as Break, which determines how much damage a character can do to Armor, and Willpower, which can be spent during a battle to increase movement speed, activate abilities, or provide a one-time boost to an attack.

"In Final Fantasy Tactics, you're basically looking at them saying, 'I want to do a bigger fireball.'"

In Banner Saga, these values are anything but abstruse, thanks to their universally low maximums — very few of a character's stats can make it into the double digits. Players can allocate points into those stats using Renown, the game's only currency, which can be earned by defeating foes in battle or acquired through microtransaction. However, each stat has a cap which regulates how high it can go, and each character has a cap for how many points can be allocated to him or her.

The result is each of the game's 16 classes — four base classes, each of which can be upgraded to one of three advanced classes — can be outfitted in completely different ways. You could load up your Axeman with high Armor and Break scores, turning him into an anti-armor machine. Or you could apply a bunch of Willpower and Strength, making him a frontline-breaking Zerg-rusher.

The classes only have one or two special abilities at their disposal, and only one equipment slot; stats, and how you use them, are the biggest way players can prepare their intricate strategies. It's also how Factions determines its matchmaking — the stats you've applied to your combatants serves as your team's overall score, and a Quick Match will find you an opponent with a matching score. This deckbuilding mechanic leads to interesting match-ups; you could spread your points around six weaker troops, or three super-strong soldiers. 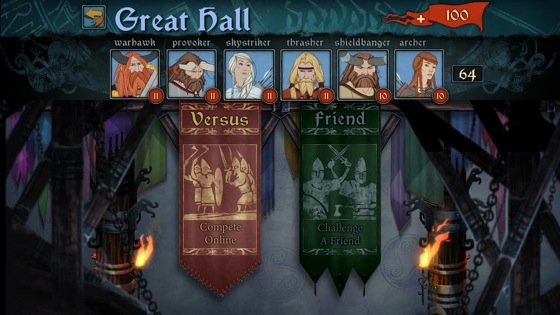 For Jorgensen and Thomas, attention to stats is one of the factors that sets Banner Saga apart from its strategy-RPG contemporaries.

"Final Fantasy Tactics was one of the games we looked at," Jorgensen said. "I've played the hell out of that game, but I'm not sure what the stats even do. I just see it's more, and I just do it. This game, we have a lot closer margins, in Final Fantasy Tactics, you're basically looking at them saying, 'I want to do a bigger fireball.'"

"Yeah, you may have 30 abilities," Thomas added, "but they're all just doing a different amount of damage, you know?"

"It would be a huge challenge for us to make an intricate control scheme work on iPad."

The Banner Saga's game board also looks much simpler than that of Tactics. There's no height or directional mechanics hardwired into the environment; characters just take turns move a set number of spaces across a flat environment, perform attacks, or execute a special ability.

"It would be a huge challenge for us to make an intricate control scheme work on iPad," Thomas said. "That was something we had to set out to keep in mind from the beginning. If we had just done whatever we wanted on PC and tried to bring it to iPad, it would have been a nightmare."

"I play it with my Wacom, which is just point and click," Jorgensen said. "We're at that point now where we're going to be redoing some of the UI to make it a bit more useful, then do a whole pass on tooltips to make it more PC-centric. But this way, soon after we launch we hope to put it on the iPad, it's going to be a very simple and quick method."

Backers of the project's Kickstarter drive should expect invites to the Factions beta soon — the rest of us will have to wait until November, when The Banner Saga: Factions launches for free on PC.