Eve Online: Retribution looks to engage and expand the game's fan base

Share All sharing options for: Eve Online: Retribution looks to engage and expand the game's fan base

Eve Online developer CCP Games today unveiled Retribution, the 18th free expansion for its long-running massively multiplayer role-playing game. The studio plans to launch the update on December 4th; it will be the second one of the year, after May's Inferno expansion, in line with CCP's rough every-six-months schedule for updates.

"This winter, justice will be done. If not by their laws, then by ours," reads Retribution's tagline. From that, and from the name itself, you can infer some of the ideas behind this particular expansion. Longtime Eve Online players may assume that radical changes are coming, but in fact, CCP says this update keeps intact the studio's ethos regarding the rules of the game, in more ways than one.

Eve Online is a famously hardcore experience, nigh-impenetrable to newcomers. A major part of that barrier to entry is CCP's laissez-faire attitude when it comes to policing the game's user base. Eve Online's digital version of the cosmos is a realm unto itself, and while CCP populates that universe with content, the studio functions as more of a distant overseer than dictatorial ruler.

"We remain very hands-off," said executive producer Jon Lander during a recent presentation of Retribution. "If you can do it in the game and you're not exploiting a bug," then the studio is fine with it.

Even when an in-game faction called Goonswarm initiated a coordinated attack on a segment of the game's population earlier this year, with the intent of crashing the in-game economy and causing anarchy, CCP sat back and watched the chaos unfold. "The worst thing we could do is to stop it happening," Lander told Eurogamer at the time. "It would be against everything we stand for."

CCP has designed Eve Online as a framework for a virtual society, with the goal of letting its players determine the nature of that society themselves. Space is a dangerous environment in Eve Online's science-fiction universe, rife with pirates who do nothing but prey on unsuspecting travelers. The kinds of actions that would be labeled in other games as "griefing," and punished accordingly, are fine by CCP here. But in a relatively lawless society, victims don't have many options.

"If you can do it in the game and you're not exploiting a bug," then go for it

Pirates will still be able to steal and grief all they want in Retribution, but CCP wanted to implement consequences for those who choose that path. That doesn't mean the studio is adding rules to the game; just the opposite, in fact. Eve Online's developers have known for a while, along with their fans, that the game's bounty system was broken. It's been a "very exploitable system," Lander acknowledged, with some strange restrictions and an "outdated definition of a criminal" set by CCP.

The studio is overhauling the bounty system in Retribution to make it more open and more player-driven. CCP wants to ensure that "consequences are enforced by players, and not necessarily the system." There won't be an arbitrary definition of "wanted" targets; players will determine it themselves. The studio is also lifting restrictions on setting bounties — you'll be able to put a bounty on players, corporations, and alliances.

In the case of a corporate bounty, you'll get paid for killing any member of the group. And the new system contains a score-chasing mechanic: bounty hunters can rack up assassinations, while targets can compete to see how long they stay alive with a price on their head. The idea, said lead game designer Kristoffer Touberg, is to "restore faith in the system" by returning control to the players.

Crimewatch "made Eve hard for the sake of being hard"

While CCP embraces the fact that Eve Online is difficult to get into, the studio doesn't want to maintain that intimidating nature due to elements that are confusing or inscrutable without bringing any benefit to the world or gameplay. One feature that fits that description — and thus was ripe for a revamp — is Crimewatch, which Touberg called a "viciously complex aggression flagging system." Once players understood it, they could easily "abuse it to grief newcomers," he said, and the system also made it easy to accidentally kill yourself without understanding why.

Crimewatch has been a system that "made Eve hard for the sake of being hard," said Touberg, and it "[added] nothing to the game." So CCP set out to simplify the system, with the hope that doing so would reduce the game's high barrier of entry.

In Retribution, Crimewatch manifests in an easy-to-understand set of visual indicators. A yellow exclamation point means you can't safely log off (your character lives on in Eve's persistent world even when you're not playing). A yellow skull-and-crossbones icon means that anyone can shoot you without repercussions from CONCORD, the game's police force. And if you see a red skull-and-crossbones icon, anyone can shoot you and CONCORD will attack on sight.

The new Crimewatch system is meant to function like a safety on a gun, so you don't accidentally shoot others and get yourself killed. And the idea behind the redesign is to reduce frustration in users who might previously have died because of factors out of their control. "If you fuck up," said Touborg, "it's completely and entirely your own fault." 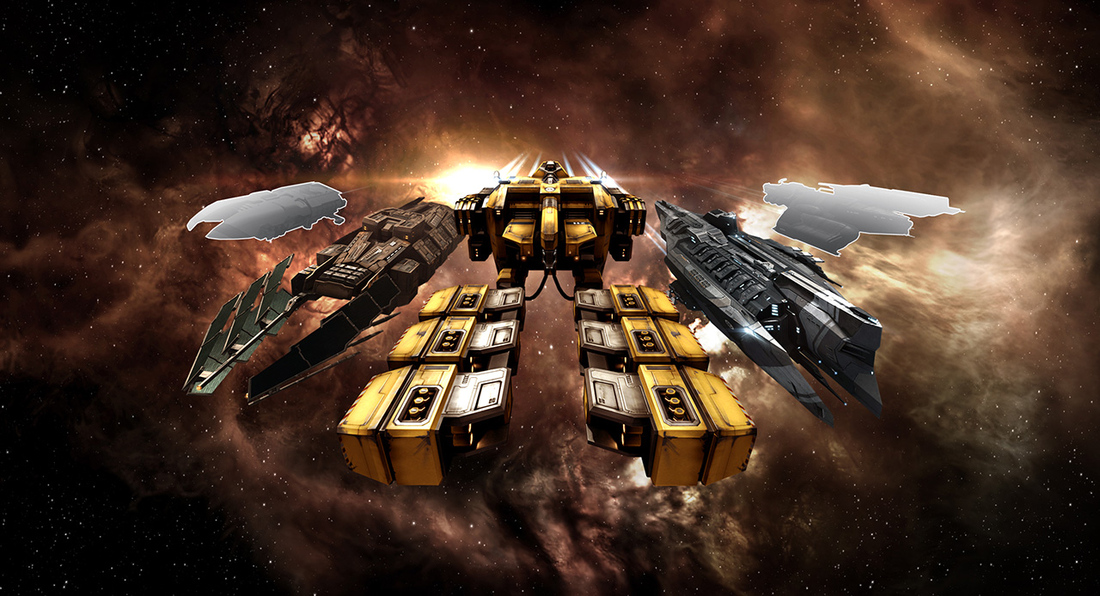 CCP is also making additions and changes to its most distinctive element: the airships that travel across its galaxy, New Eden. The studio is rebalancing some of the lower-tier ships — cruisers, frigates, and destroyers — making them more powerful so they're more viable early on in the game. CCP showed off work-in-progress designs of new destroyers for each of Eve's four races, as well as a salvage drone. And a new mining frigate (the yellow vehicle in the image above) will be accessible to newcomers, but will be capable enough to enable "ninja mining" for experienced players. The general idea with the changes to airships, said CCP, is to "[redefine their] roles and progression," and give players a reason to bring back ships that have fallen out of use.

Retribution will also introduce CREST, an API — with read and write access for select parts of the game — that will facilitate development of third-party apps that hook into Eve. Something that's already on the docket is "Eve Everywhere," a web app that will allow users to chat with other players even when they're not in the game themselves. "The social side of Eve is very, very important to us," said Lander.

Retribution seems to be in line with CCP's new strategy of listening to Eve's fans, instead of ignoring their concerns. The overhauled bounty element, for example, is a direct response to the endless forum threads from players with suggestions on 'how to fix Eve's broken bounty system.' And Retribution also seeks to further CCP's hands-off management of its massive game, while making it more inviting to newcomers.

CCP will continue expanding Eve's world as the game approaches its 10th anniversary next year, an occasion for which the studio has planned "a number of really interesting moments," according to Lander. But the content that the company builds is meant only to support the users.

The main idea behind Eve, said Lander, is to "enable players to really make a game for themselves."