The character is the deck.

Share All sharing options for: 'Card Hunter' is a collectible card game for the loot-minded RPG fan

Even if you've never touched a deck of Magic: The Gathering cards, you may still grasp the collectible card game complexities of Card Hunter, one of the highlights of the Indie Megabooth at PAX Prime this weekend. Because if you've ever outfitted a paper doll avatar in a role-playing game like Diablo or Baldur's Gate, you already know how to build a deck in Card Hunter.

Card Hunter, its creators say, is a hybrid of collectible card game, role-playing game, and board game. There's deep reverence for Dungeons and Dragons and Magic: The Gathering in this free-to-play Flash game from developer Blue Manchu. Card Hunter exudes '80s nostalgia with its medieval fantasy archetypes and aesthetic, pitting the player against a dungeon master in turn-based, deck-versus-deck battles involving skeleton warriors, evil wizards, and acid-spitting dragons.

Rather than task players with the challenge of building a deck of dozens of cards, Card Hunter uses an easy-to-understand inventory system. Players outfit their characters with weapons, armors, accessories, and magic items. And each of those items has a handful of cards associated with it.

A sword, for example, would add four attack cards to your deck, letting you perform bludgeons or simple strikes. A pair of boots would add movement cards. A magic staff would add lightning bolt spells or defensive spells. When fully outfitted with armor, weapons, magical gear, and other accessories, players will find themselves with a fully customized deck. 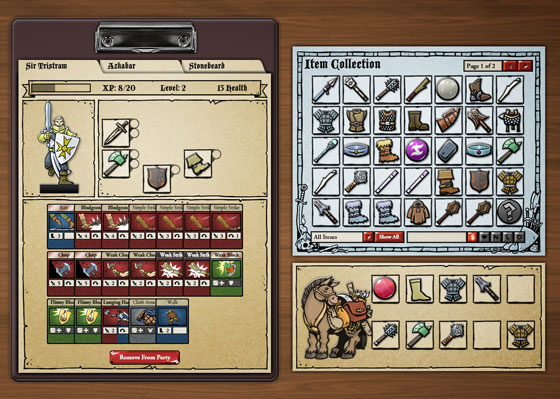 As players progress through Card Hunter's "extensive" single player campaign, they'll find new loot. Better equipment means better, more powerful cards. Some equipment will come with more raw power, some will come with trade-offs. In one example, Card Hunter creators showed us an item that added a very powerful spell to a player deck, but was saddled with two cards that might cause the player to trip up and skip a turn.

Card Hunter is being developed by Sydney-based studio Blue Manchu, which boasts a handful of game development veterans formerly of Irrational Games — people who made BioShock, Freedom Force, System Shock 2, and Thief. Magic: The Gathering creator Richard Garfield is serving as a design consultant on the game along with Skaff Elias, founder of the Magic pro-tour.

Here's Jonathan Chey, game designer and programmer on Card Hunter (and designer of Freedom Force), to tell us more about the game.

We got a chance to play a few single-player rounds of Card Hunter at PAX Prime this weekend — with some guidance from Chey — and found the game incredibly well-made and stunningly simple to understand. As an inexperienced CCG player, often intimidated by the depth of Magic and its like, Card Hunter's method of abstracting the process of deck-building via the common language of loot gathering and inventory management is something I greatly appreciate. This is a wonderful introduction to a deep genre.

Based on Chey's comments, Card Hunter's free-to-play model sounds welcomingly unobtrusive. Players will not be required to purchase decks and boosters, as items and cards are won throughout the single-player campaign. Instead, players will be able to purchase avatars and buy into multiplayer tournaments — thought it doesn't sound like the game's multiplayer mode is pay-to-play.

Card Hunter will soon enter a closed beta, with a release planned — but not confirmed — sometime this year.