The developer of Aliens: Colonial Marines announced at PAX this weekend that, despite previous confirmation to the contrary, the sci-fi shooter will feature playable female space marines.

During an E3 livestream, when Gearbox producer Brian Burleson was asked whether Aliens: Colonial Marines would feature female colonial marines, he responded "No, sadly not." He added "There's lots of girls in the game, it's not just all guys." Given the Alien series' strong female protagonists, like Ellen Ripley and Private Vasquez, an all-male playable cast seemed like an unusual oversight by the developer.

The game's box art features one woman among the four colonial marines, a character named Bella who will appear in the single-player campaign.

Over the weekend, Gearbox community manager Chris Faylor responded to fans petitioning for the inclusion of playable female space marines, saying that they would be playable in Colonial Marines' "competitive multiplayer as well as co-op, complete with customization elements."

"This is something the team has been planning and working on for quite some time, and that work is finally at the point where we can confirm it will indeed ship with the game," Faylor said.

Gearbox showed concept art and character renders of the four marines who will be featured in multiplayer and co-op, revealing Demarcus Short, Jennifer Redding, and Guillermo Quintaro. They'll join Corporal Christopher Winter, the hero of the game's campaign. 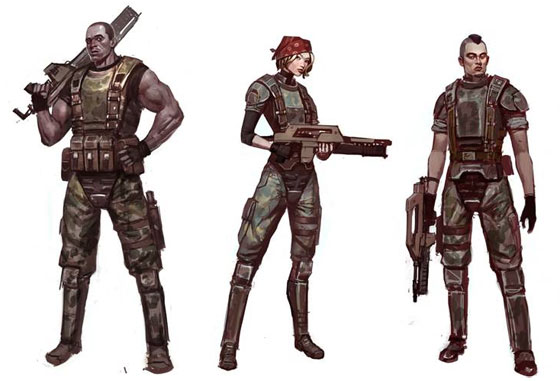