'FarmVille 2' represents the next generation of social games, says Zynga

Share All sharing options for: 'FarmVille 2' represents the next generation of social games, says Zynga

FarmVille was and still is one of the most played and financially successful games on Facebook. Today, it gets a sequel.

The idea of a sequel to a social game almost seems bizarre. Social games are, by nature, constantly evolving services that are frequently updated and modified. A social game that launched six months ago could potentially look and play very differently today. So when one of the world's most well-known social games (arguably the game that brought modern-day social games into public awareness) announces a sequel, questions are going to be raised about what this means for its predecessor.

FarmVille was and still is one of the most played and financially successful games on Facebook. Today, it gets a sequel.

"I don't want people to think FarmVille 2 is a replacement for FarmVille," Tim LeTourneau, the vice president of games at Zynga tells Polygon. "It was never our intent."

LeTourneau says that three years on from launch FarmVille continues to be a thriving business. When it was first released in 2009, it reached 10 million daily active users in six weeks. At its peak, 32 million people were playing the game every day. The game currently draws three million daily active users – a significant dip from its peak – but the number still puts FarmVille ahead of most of its Facebook competition.

"I don't want people to think FarmVille 2 is a replacement for FarmVille ... it was never our intent."

"But at the same time, we recognize that a lot of players have moved on from FarmVille," he says. "We really want to re-imagine virtual farming and bring some of the people back to the FarmVille family, so that's what FarmVille 2 is."

Taking advantage of technology advancements, the team at Zynga is starting fresh. It's not that there's anything wrong with FarmVille, Le Tourneau says. It's that the team has new ideas, new technology, and new things they want to do, and they can't do it without radically changing the existing FarmVille. So rather than force facelifts and augmentations onto a game that doesn't need it, they're starting with a clean slate by making a sequel. Both games will share the farming theme, but FarmVille 2 will not only look different, but also play different.

LeTourneau and FarmVille's director of design, Wright Bagwell, come from AAA game development. Between them they've worked at EA, Maxis, Visceral Games, and Valve to produce games like The Sims, Dead Space, and games in the 007 series. Having seen what social games can do and the rate that players can pick up and learn the game mechanics, LeTourneau and Bagwell feel that many of them are ready for the next generation of social games, with the "next generation" being defined by games that are a bit more complicated, a bit more interconnected, and incorporate more mechanics that are usually seen in traditional games. 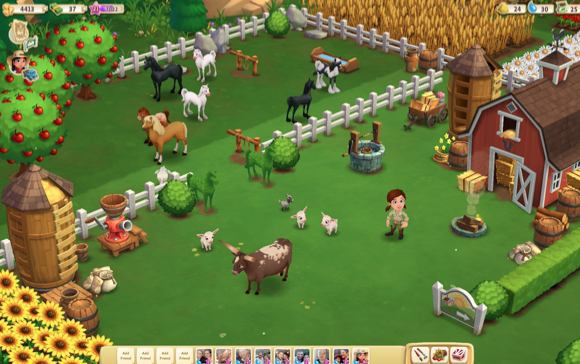 LeTourneau says that FarmVille 2 is a marriage of what the developers have learned from the traditional game development space with the social gaming elements that Zynga is best known for.

Many of the features introduced in FarmVille 2 are subtle, but they're also evidence that the developers have listened to criticism and feedback. Unlike FarmVille, which gave players farmland with no real goals, quests, or purpose, FarmVille 2 tries to give context to the existence of the player's farm and also gives the player a reason for being in the game.

"We want you to feel like you're part of a village and we also wanted to tell a story in this game," Wright Bagwell says. "The story of this game is you're coming back to bring an old family farm back to glory. You played here when you were a child, and as you farm in this game we sort of rekindle old memories."

"If you harvest tomatoes you, surprisingly, get tomatoes"

When players start up the game for the very first time, they're greeted with a postcard from an old friend that shows a picture of what the family farm used to look like. Beyond the farm, a village is visible in the distance. The game gives the sense of a world beyond the player's patch of dirt – you're not just planting berries all alone in your Facebook browser – you're connected to something much bigger.

Bagwell says that the developers have gone to great lengths to give context to every action performed in the game. If you harvest tomatoes you, surprisingly, get tomatoes. If you harvest blueberries, rotund blue things the size of the character's head spring forth from the crop. Gone are the days of coins falling from the sky.

The world is also much more interconnected. For example, in order to feed your farm animals, you need feed. To make feed, you must grow crops, harvest them, and put them through the feed mill. If you feed a chicken, it will lay an egg. Feed a goat, it'll give you bottles of milk. Feed a cow and you'll get fertilizer. All these items can then be used for other purposes or be reinvested into the farm. The fertilizer from the cows can be used to double the yield of crops and, occasionally, produce "prize crops" – a kind of genetically modified giant food that can (literally) be entered into (virtual) food fairs where the player competes with their friends. 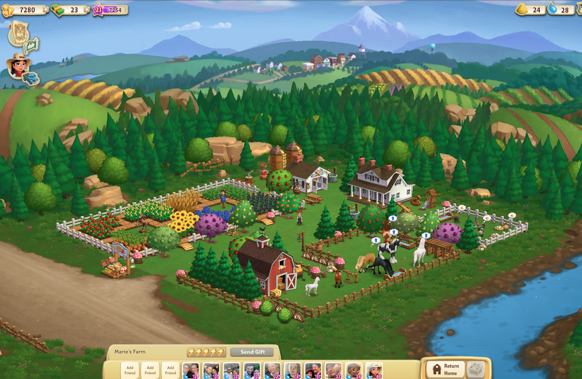 Produce from the farm and its animals can also be used to craft items in the kitchen. Borrowing from many traditional role-playing games and iterating on existing Zynga games that feature crafting like CastleVille, players can open up their farm kitchen and, using eggs from the chickens, milk from the goats, flour from the wheat, and apples from the orchards, make a batter that can be baked into apple scones. These apple scones can then be sold at the farm's roadside stand or to the village grocer. Everything the player grows can be sold for in-game money, and items the player crafts tend to be worth a lot more money than raw produce. Coins earned can then be spent on cosmetic items or to buy progress.

The game has also abandoned the energy system. In previous Zynga games players were restricted by how much they could do based on how many energy points they had. Plant a seed? That's one energy point. Plough the soil? Another energy point. Players could either spend real-world cash to buy more energy or they would have to wait for their energy to naturally replenish. In FarmVille 2, players can perform as many actions as they wish – the only potential restriction is water, which is used to grow crops. Players can build wells to supply their farms with water, but if it runs out they either have to wait for it to replenish, or they can spend money to buy more water.

"Not everyone game needs to put a gun in your hand and have you shoot things in order to be enjoyable."

As with any Zynga game, FarmVille 2 also has a strong social component. Bagwell says that friends can speed a player's progress up by allowing them to plant and yield crops instantaneously.

"Friends are the most powerful thing in the game," Bagwell says. "For example, if I'm waiting for my wheat to grow, I can get my farm helpers (friends) to come to my farm and grow it for me."

Players can call upon their friends, who arrive on their farm in real-time. They can then be selected with the click of a mouse and their flopsy bodies can be picked up and placed on top of a crop that needs growing. Farm helpers can turn seeds into giant fruits in a matter of seconds.

"This isn't just a virtual, traditional game board," Bagwell says. "It's a breathing world and everything is really interconnected. I grow my crops to feed my animals, my animals fertilize my crops, I need water to grow my crops and my trees, and it tells a nice story that you're trying to bring this farm back to life." 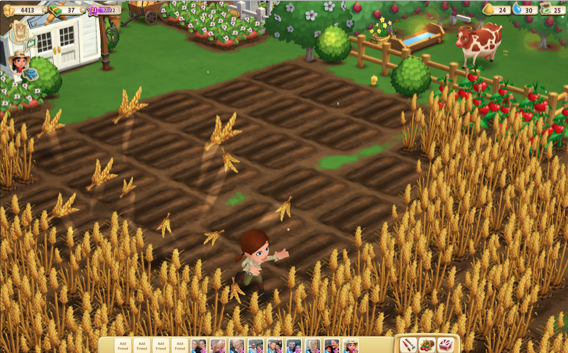 Developers at Zynga often speak of their games as opportunities for people to escape – to zone out and focus on something simple and soothing for five minutes – a kind of zen garden experience. If FarmVille was a zen garden, then FarmVille 2 is an ant farm. According to Bagwell, it's meant to be therapeutic and relaxing – the team have worked very hard to ensure that all the sounds in the game help the player relax, from the music in the background to the sound that plays when the cursor hovers over wind chimes – and it's also meant to be lively. But FarmVille 2 doesn't just represent a zen experience, Bagwell says. One of the common criticisms targeted at FarmVille is that it isn't much of a game, to which Bagwell says: "It's about a getaway for a few minutes during the day where you can separate from your real world and go to one that's simpler, but I don't think that doesn't mean it isn't a game.

"There are lots of games that have been made that have these qualities. Not every game needs to put a gun in your hand and have you shoot things in order to be enjoyable.

"I spent many years making The Sims and I will tell you that there was a zen quality to that as well, which was involving yourself in the story of these simulated people. I don't think that means it's not a game. It's a type of experience, and I think there are many great examples of those entertainment experiences."

FarmVille 2 is playable on Facebook and Zynga.com today. Whether players are drawn to the entertainment experience that FarmVille 2 has to offer will be known very soon. Whether it will replace FarmVille? Well, we'll have to wait and see.