Share All sharing options for: Play 'NBA 2K13' the way you want with 'NBA 2K Everywhere'

NBA 2K13 fans will be able to engage with the game in numerous ways on a variety of platforms, thanks to a new initiative called "NBA 2K Everywhere," 2K Sports announced today.

NBA 2K13 fans can engage with the game in numerous ways on a variety of platforms, thanks to a new initiative called "NBA 2K Everywhere," 2K Sports announced today.

"Our console game will always be the heart of the NBA 2K franchise, but we want to go beyond that," said 2K Sports' vice president of marketing, Jason Argent. "We're offering more ways to experience NBA 2K than ever before."

NBA 2K Everywhere includes a free mobile companion app, MyNBA2K, in which users can play mini-games such as shooting practice, dribbling drills, and autograph signings in order to connect with the MyCareer and MyTeam modes in the NBA 2K13 console game. MyNBA2K, made by NBA 2K developer Visual Concepts, will be available in October on iOS, Android, and Kindle Fire.

NBA 2K13 on iOS and Android, the second NBA 2K game on mobile devices, is in development at 2K China. It will offer a simulation basketball experience with multiplayer functionality, which was missing last year. The game will also include the NBA's Greatest mode, which lets players relive classic NBA games. It will be out in October. 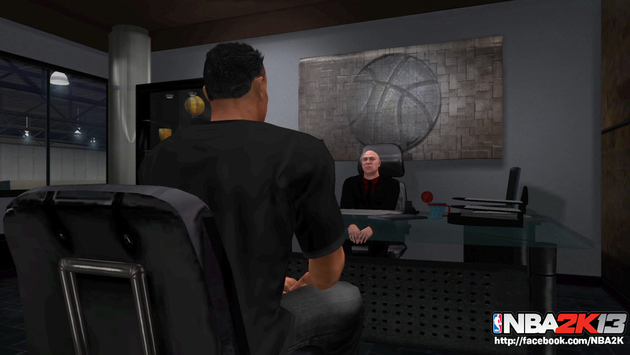 NBA 2K13 is set for release on October 2nd, 2012, on Xbox 360, PlayStation 3, PC, Wii, and PSP, with a Wii U version to follow this holiday season. Check out our full gameplay preview for more details.