Lurk in the shadows

Shadowrun Returns studio Harebrained Schemes recently released the first assets for the Kickstarter-funded title, and they provide a look at the game's isometric perspective.

Shadowrun Returns studio Harebrained Schemes recently released the first assets for the Kickstarter-funded title, and they provide a look at the game's isometric perspective.

Harebrained is building Shadowrun Returns as a turn-based tactical role-playing title, a "spiritual successor" to the Shadowrun games from the Genesis/Super Nintendo era with a grounding in the original tabletop Shadowrun game. Shadowrun fans funded the development of Shadowrun Returns this April with nearly $1.9 million in Kickstarter and PayPal contributions, more than 470 percent of Harebrained's $400,000 goal. The developers initially "had a much more modest game in mind," but are now working to meet the higher expectations that come with extra funding.

The additional money allowed the studio to shift from a top-down perspective to an isometric view. Harebrained implemented a "hybrid approach," putting 3D characters in a 2D game world.

"The 2D background allows us to deliver a level of detail, depth, and expressiveness that we think will capture the tone we're working toward," said Harebrained, "while the characters' 3D structure allows for fluid movement, and a wide range of character design and equipment options." 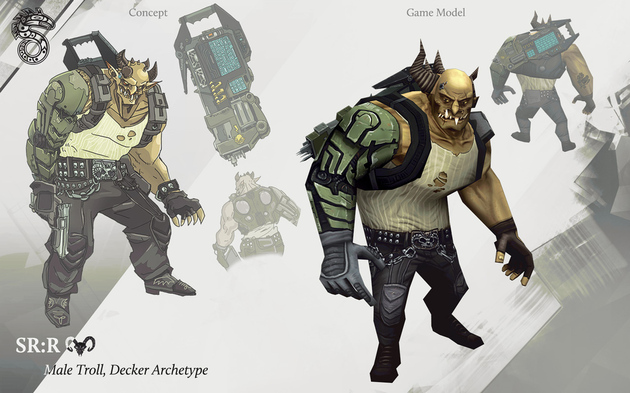 Harebrained provided concept art and in-game models of some characters — the full game will offer humans, dwarves, elfs, orks, and trolls in both genders — and placed them in a few sample environments. The developers cautioned that the images were composed in Photoshop, since the Shadowrun Returns game engine is still in development, but said that "overall this is the look that we are shooting for." One of the images offers an "exploded view" of a scene, showing off the individual tiles that went into it; Harebrained will make the game's tile editor available to users, so they can build their own environments.

Check out the gallery below to get a look at the characters and environments. Shadowrun Returns has an estimated release date of January 2013, and will be available on PC, iPad, and Android tablets.