Every so often an indie comes by and takes the competitive scene by storm. A few years ago Samurai Gunn was all the rage, followed by Nidhogg and TowerFall. Videoball is decidedly wackier than all of the aforementioned arena games combined, but beyond that silly veneer is a deep combination of sports sensibilities and shoot 'em up charm. 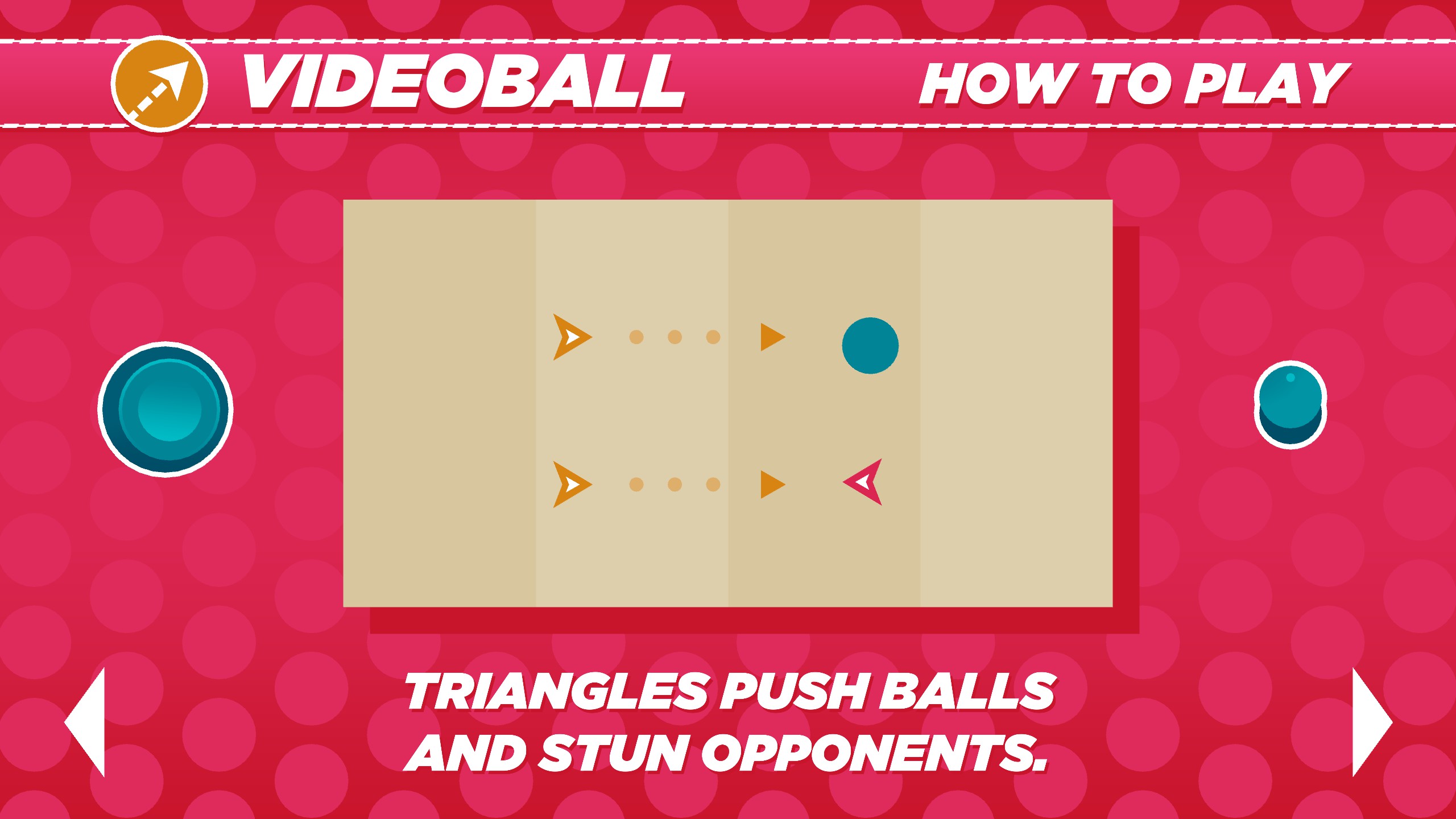 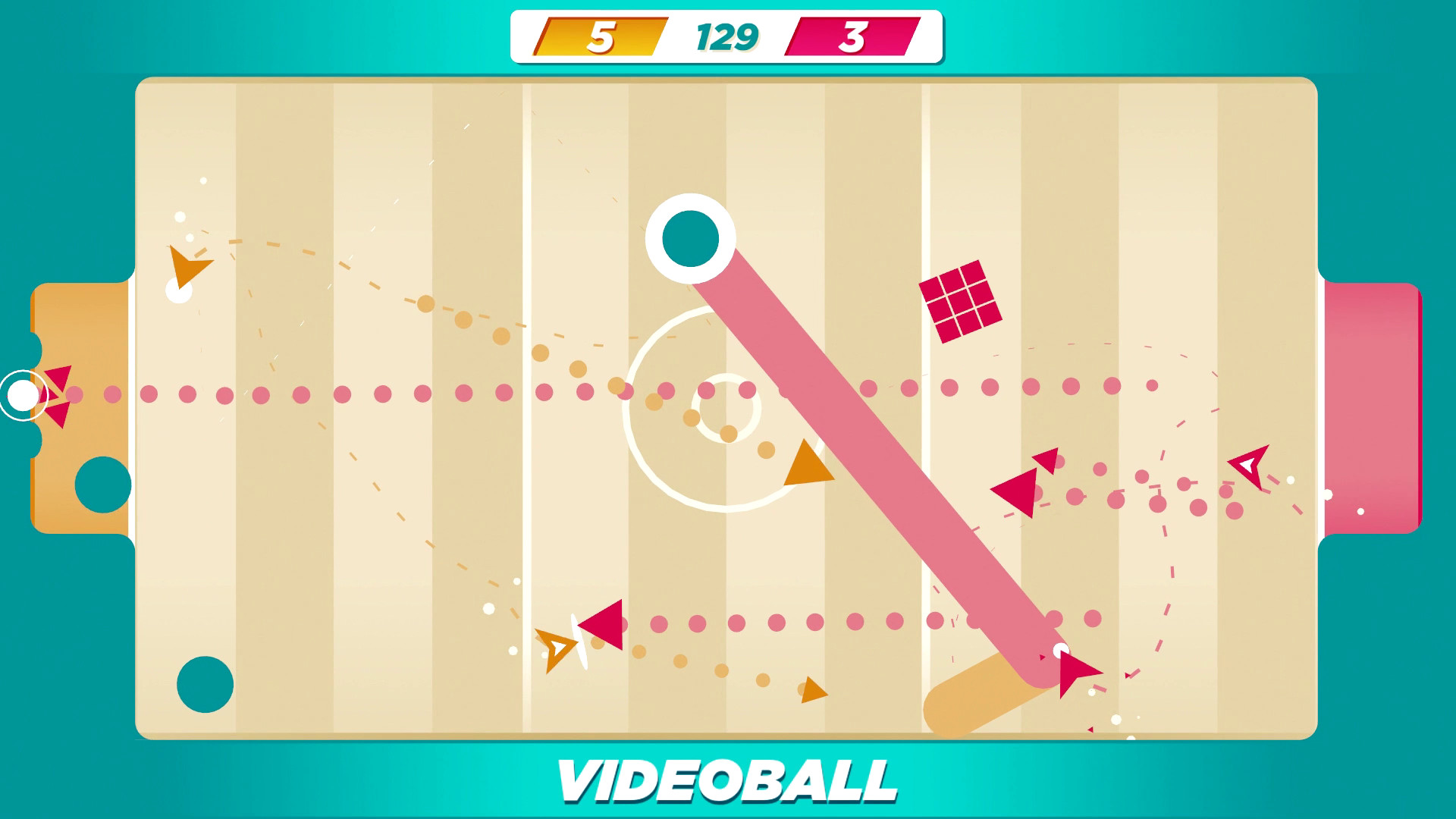 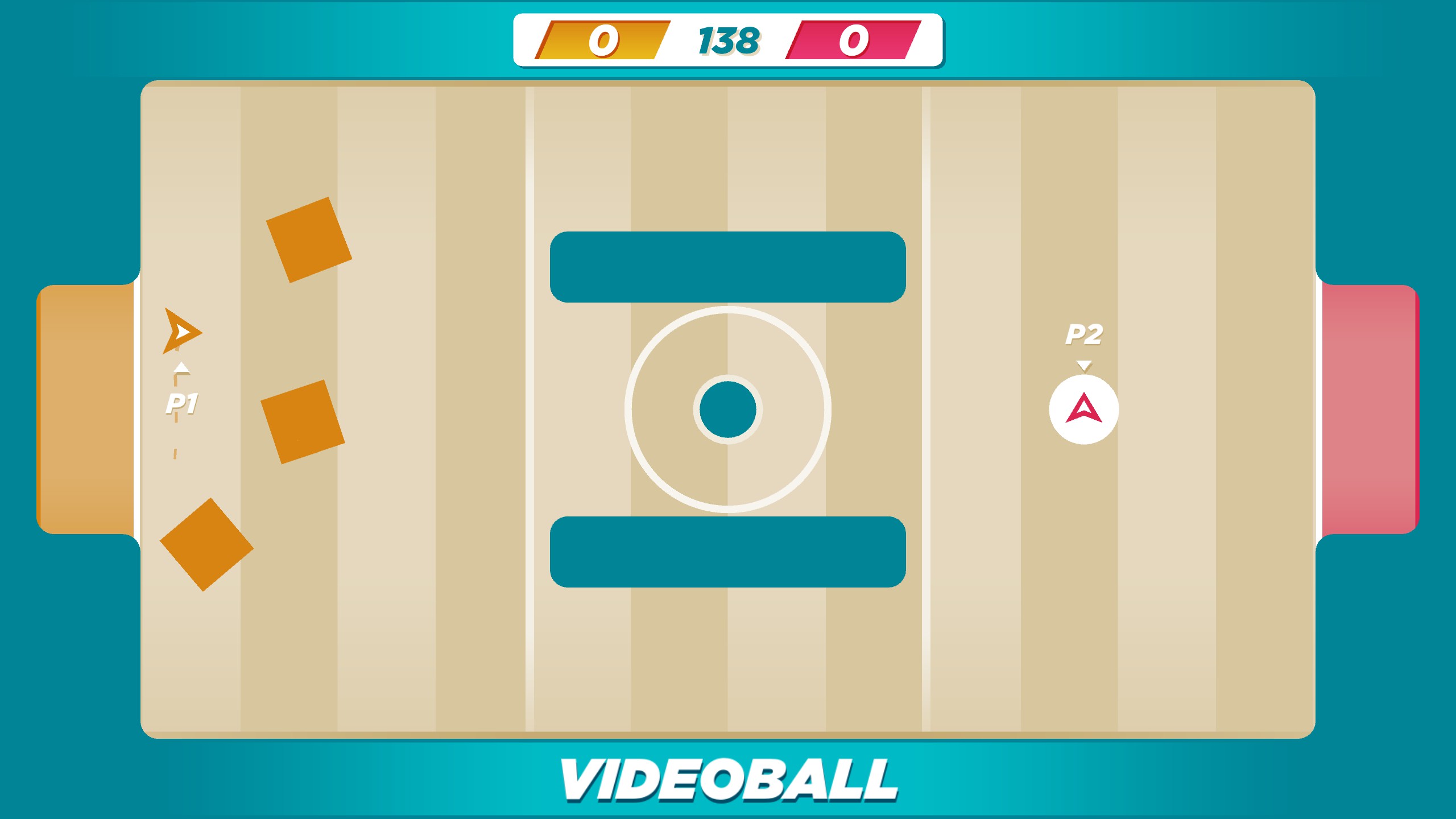 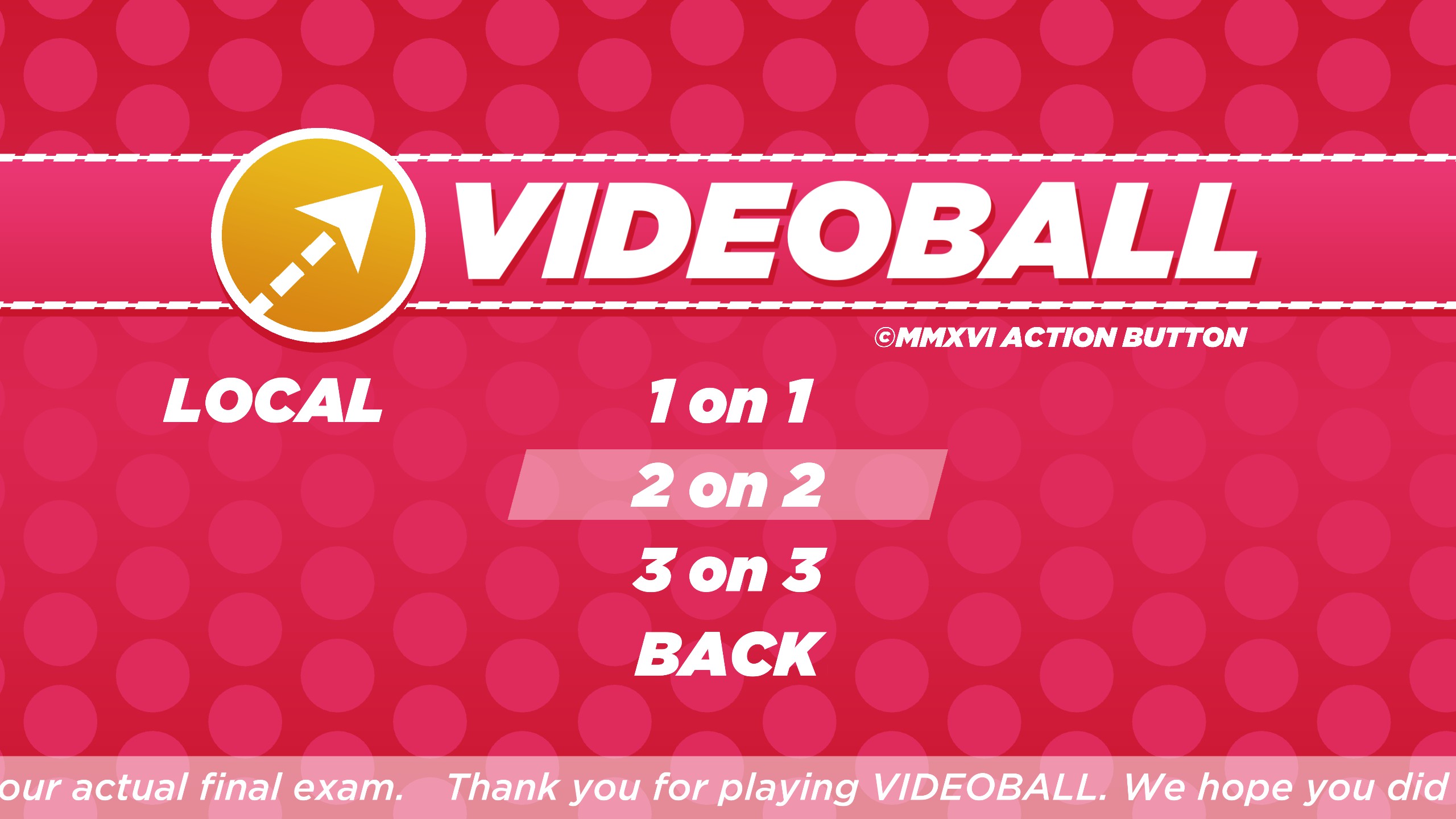 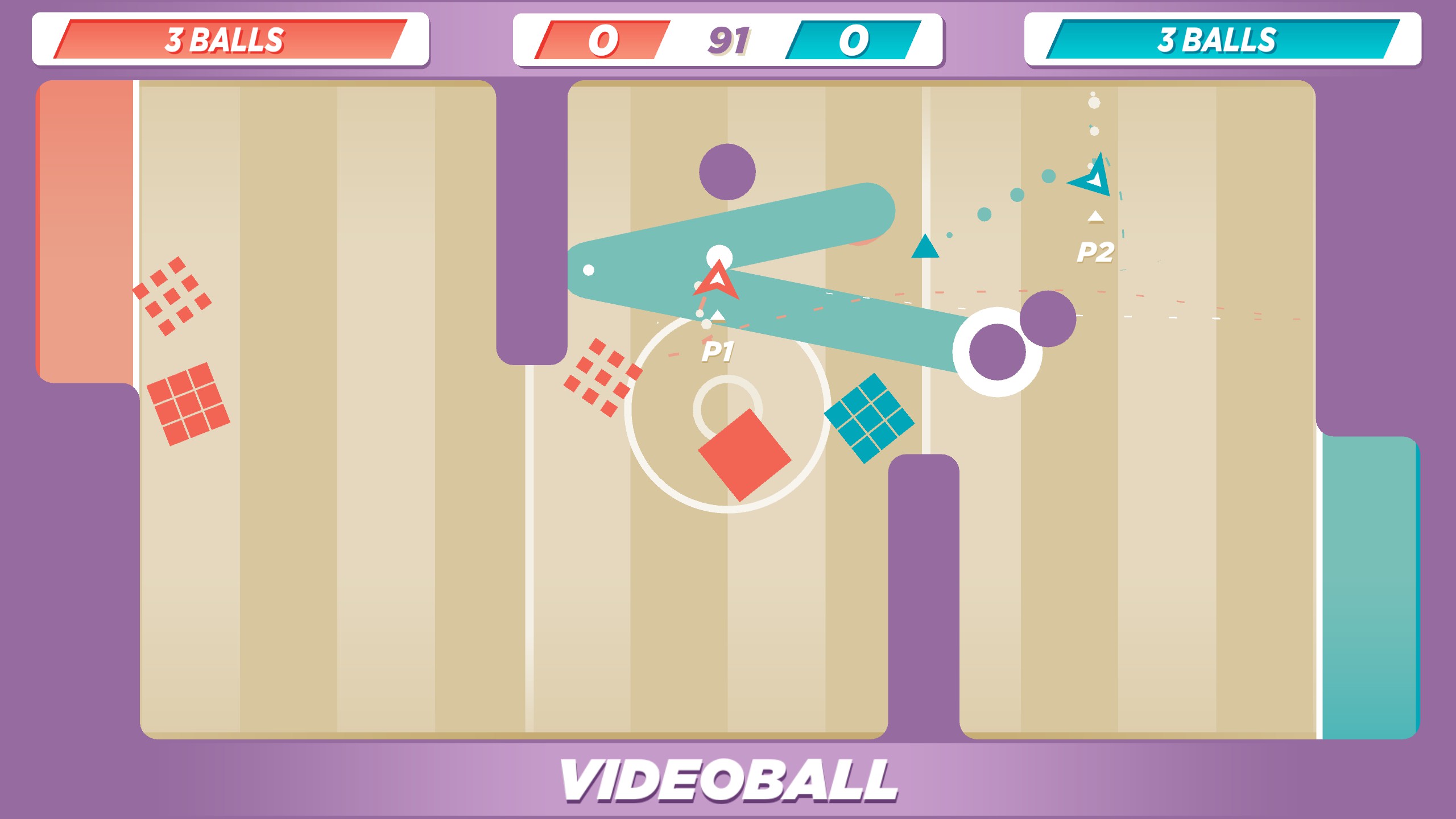 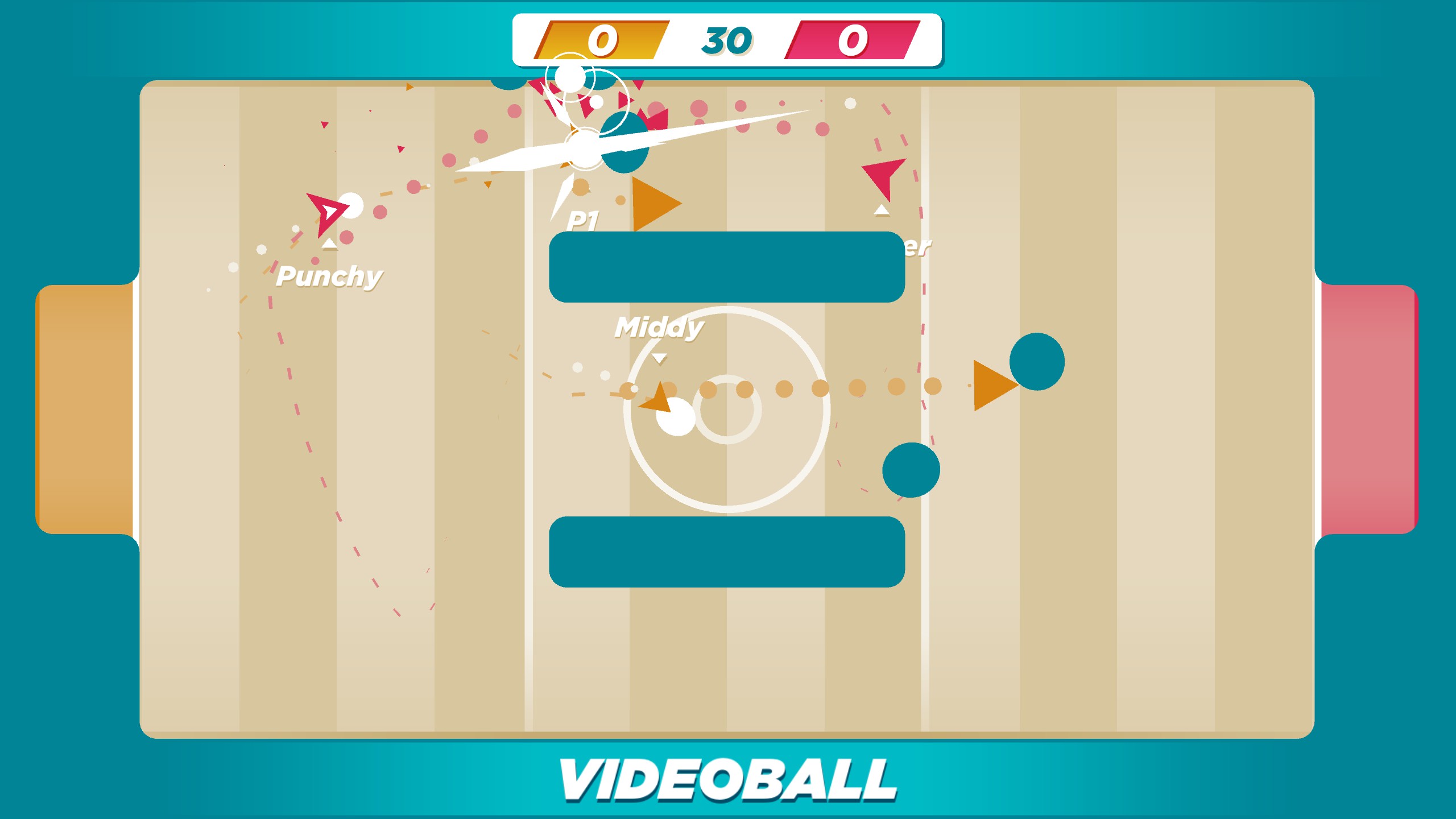 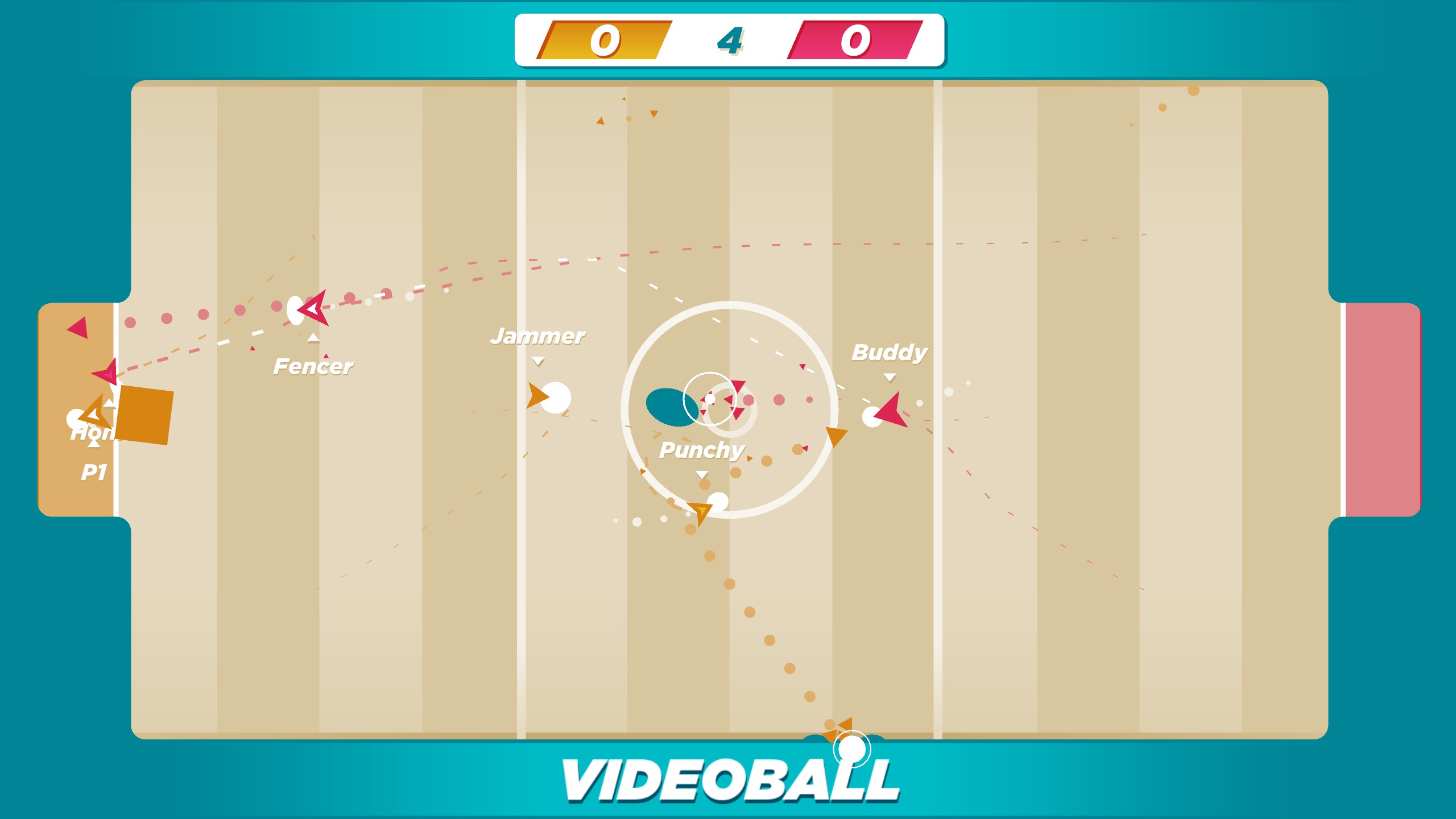 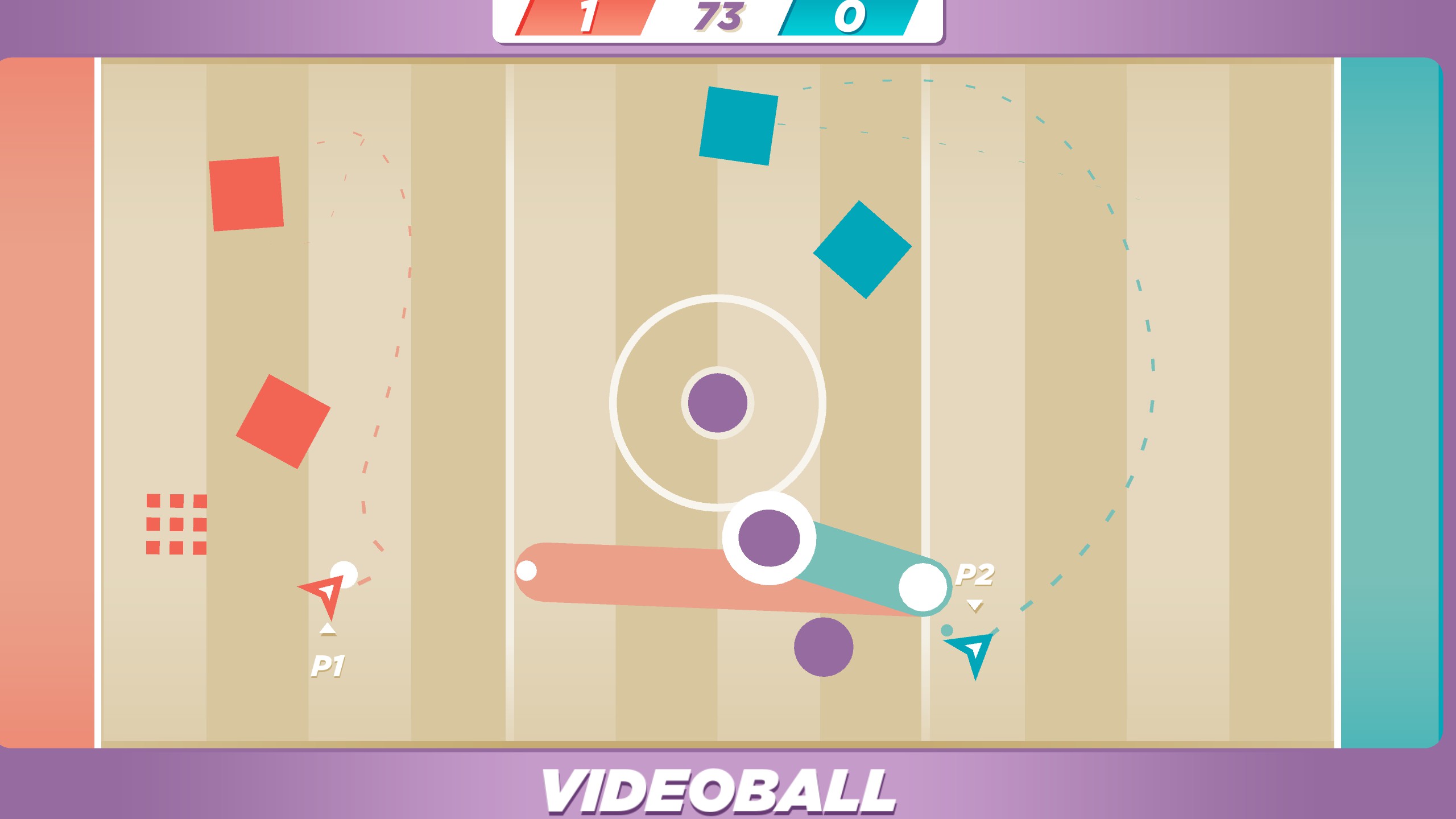 Videoball is played with one button that performs many functions. By pressing that button, players will fire off a single, arrow-shaped shot out of their avatar, which is also represented by an arrow (and thus providing the trajectory). Shots not only pierce and stun other players (shoot 'em up), but they also push a ball (sports) across the map. Your goal is to push as many balls as you can into your opponent's goal. Sounds easy enough, right?

Well, that multiple-function shot really complicates things. As a rule, you'll want to use larger charged shots to move a ball downfield, and smaller ones to chip it into a goal. Here are the basic types of shots you can take:

All of these charges trigger audio cues, which are crucial to understanding when to fire. This is mostly because like all shoot 'em ups, you need to not only focus on your avatar, but the entire board. You need to see where balls are coming from to intercept them. To assist your teammates in team games, you need to focus on where your side is aggressively pushing. You can also inuit enemy audio cues and know when they're charging up as well, then position yourself accordingly.

In short, you need to play two games at the same time. Players can bank balls on walls just like billiards, and while managing your offense, you'll need to dodge shots like a shoot 'em up defensively and keep tabs on trajectories that the enemy team is using to come at your goal.

Depending on your current situation, you may need to play the backfield and protect your goal. You can do this in one of two basic ways — setting up barriers, or volleying balls in your zone back to the other side. If you have some downtime and a ball is in a particularly odd spot, away from your area, take a moment to set down some barriers. Instead of littering your side with junk, you should make the most of your placements.

A basic fan formation (seen above) can cover most of your goal, as the ball merely needs to bounce off of any given barrier and not enter the score zone. Also, don’t underestimate the value of a well-placed maximum power shot. It can completely turn the tide, and on maps with multiple walls, banking them correctly to ensure maximum distance can even force them into the enemy red zone.

Videoball is hard enough to master in a small, intimate setting, but adding more players to the mix results in even more chaos. Plus, options allow for multiple balls to be present on-screen at the same time.

In this section, we'll help you understand just how different each mode can be, and how to properly prepare for them.

One-on-One: the art of the duel

We recommend you start here, with a CPU in arcade mode to acclimate. You can also opt to assign a CPU in local play. Just change the second player's settings.

This is the rawest form of Videoball, as it's just you and your opponent trying to predict each other's movements and shots. Here more than ever, duels will occur. You'll need to get used to shooting opponents out of their charges, and using those few precious stunned seconds to come up with a plan of your own. If you're winning, building a few structures at your goal can be beneficial, but just make sure that your opponent isn't being aggressive, as they can dismantle them with a few quick shots and score a goal in the process. With one-on-one games, players need to be aggressive or they'll fall behind.

One big thing to remember is that it's OK to trade (sacrificing one enemy goal in favor of your own) in games that feature multiple balls. If you're going for a ball and are up by at least one goal, and another player is going for another ball, if you both score you're still ahead. Use this to your advantage to keep a leg up and manage a match at a slower pace. By the time your gleeful enemy looks up at the scoreboard, you'll already have won. If they realize this and start coming for you, switch tactics and go on the defensive.

Adding another player into the mix on the same team fundamentally changes Videoball, especially if you aren't playing with them side by side, and lack voice chat. You'll want to immediately feel out who is comfortable playing defense and who wants to be the attacker, which will greatly help your team dynamic. It's kind of like deferring to your teammates as a support in a class-based shooter when it's needed, even if you want to play offense: Being comfortable with each role and being willing to slip into it will increase your chances of winning.

As a defensive-minded player, note that you can still fire long charged shots across the field to either stun enemies or push a ball downfield, so you don't need to just sit there at your goal. Put down some structures (three of them with the aforementioned fanned angle is usually good enough), and then start moving balls as far as you can. If you're winning, you can do what teams sometimes do in hockey and pull the goalie, adding two offensive players to the mix.

Since you have two opponents both potentially setting up protective barriers, try to blast them as often as you can to clear up space for your teammate to work.

We'd hazard a guess that three-on-three is probably the least regulation mode on offer, as it can get so hectic that wins can almost feel random. Like in two-on-two, you can also have one person play defense, but with two people playing midfield (one at the top and one at the bottom) and one as a striker you can also find success. Here, you'll probably encounter tons of volleys, and barriers break more often with three players attempting to shoot them down. Naturally, they're a bit less effective here, so don't focus too much on them against a hyper-aggressive team.

Instead, you might want to adapt into a PvP (player-versus-player) role, gunning down the enemy team while the other two focus on the ball. You can significantly cut down on volleys that way if you're constantly canceling them. With some practice, you can rapidly fire at all three opposing team members consistently.

Occasionally while waiting for a match to queue, your player card will show a random phrase like "I'll give it my best attack!" Consider using this as an unspoken means of sidling into a role during a match. It remains to be seen if this will become part of the meta, but if you see others doing it, it helps to be aware of what your card states during the countdown.

The first trick you need to pick up is that you can shoot enemies out of their charges with a well-placed shot. It doesn't even have to be a charge in turn. You can just spam chip shots and pull them out of a big charge. Alternatively, you can let them charge and fire off a return shot, which cues a special reflection boost. In other words, if you volley it back, the ball will propel itself back into the enemy and stun them, allowing you to immediately charge and possibly send it into their goal in just two actions.

As we stated earlier, always be aware of what your opponent is doing. Scan them over in the first 30 seconds of the match. Do they tend to use charged shots closer to their goal? You'll have time to set up some defensive blocks and then work on sneaking balls into angles they aren't watching. Are they aggressive, using charges at your goal? Ready charges of your own on defense to volley it back, then follow the ball while they're stunned.

Again, listening to audio cues for all participants can help you assess the playing field even if you aren't capable of watching everything. A common trick is to focus on the ball, and leave the avatars in your peripheral vision. You'll get used to watching the entire board that way.

Another thing to watch out for in some games: Multiple balls may appear. Watch that new ball timer once a ball is moved off of the circle, as you can ready a shot to push it out of neutral territory and into an enemy zone right away. It can be beneficial to sort of camp the middle in matches with lots of balls, firing them all away from your goal, creating an untenable situation for an enemy while they whittle away at one of them.

You can also take off the edge a bit if you're on the receiving end of this tactic. Push a ball into the center, and the timer will not only go away, but further balls with stop spawning. You can even place blocks near the middle to keep them contained while you get your bearings.