Even if you're careful while playing No Man's Sky, you're eventually going to upset the ever-present Sentinels, the game's ever-present robotic busybodies. Maybe you were hunting adorable animals for sport, or maybe you just got overzealous collecting that sweet, sweet Plutonium. The cause doesn't matter because now the fuzz is on to you. 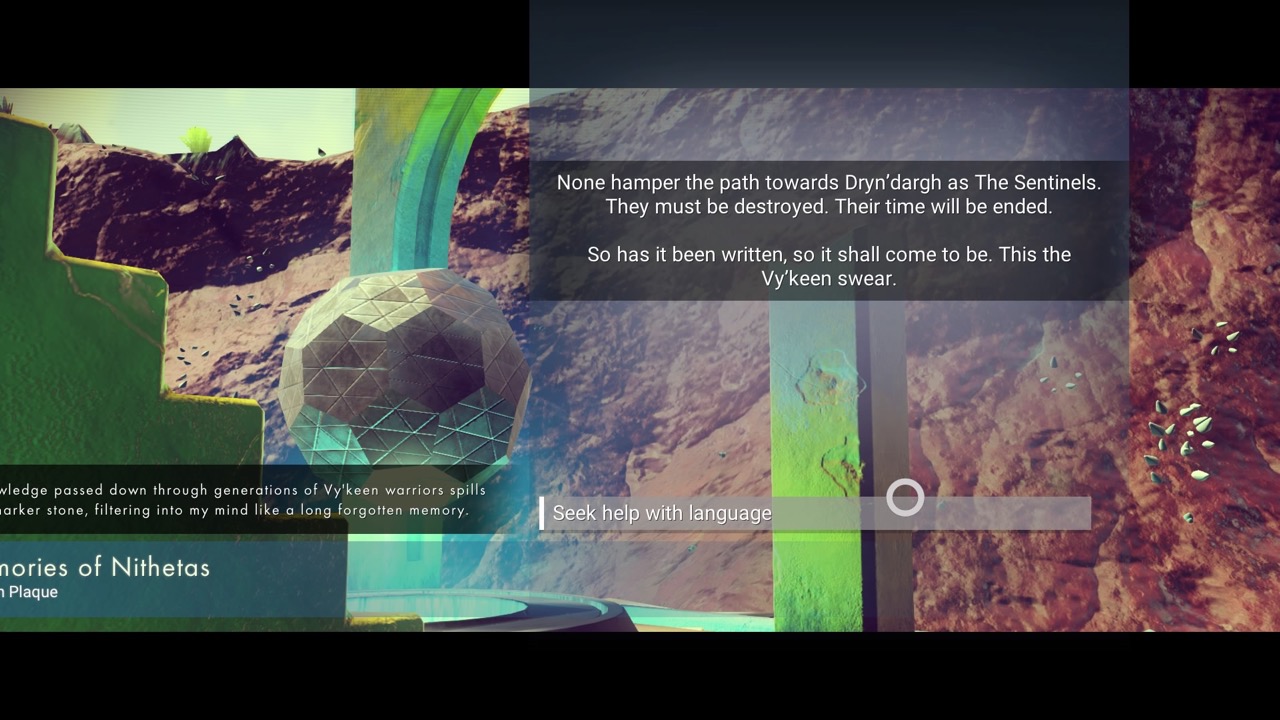 Based on the information we've received from Monoliths and Plaques, the Vy'keen hate the Sentinels. If Vy'keen lore is to be believed, the Sentinels are just the worst.

The Sentinels, as we mentioned in the beginner's guide, are galactic game wardens. On planets, they exist to make sure no one takes too much from any one place. Since that's basically all you're here to do, this puts you at cross-purposes with them.

Once a Sentinel switches into attack mode — indicated by your wanted level switching to red — you have two choices: fight or flight. The low-level Sentinels you upset by mining too much are really only concerned with whether or not they can see you. If you flee the scene of the crime by going inside a building or your ship — or even just staying out of sight for a minute — they'll lose interest in you pretty quickly.

If, however, you don't get away fast enough or choose to take a stand, the Sentinels will start calling for backup. An icon over the Sentinel switches to a red exclamation point and a circle starts filling up, indicating how close they are to completing their distress call. 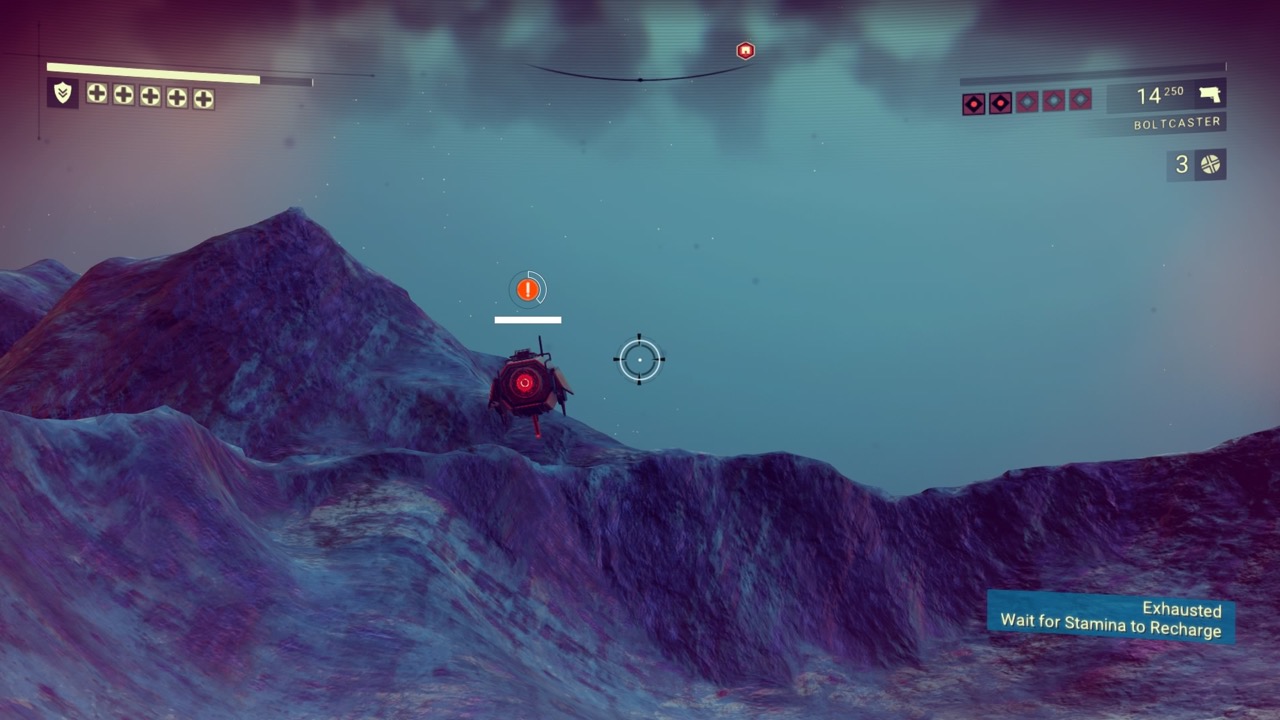 If you don't destroy the Sentinel Drones placing this call, you'll be faced with a wave of Sentinel Attack Drones. You'll quickly learn that these pack a harder punch than the Drones you see flying around normally. 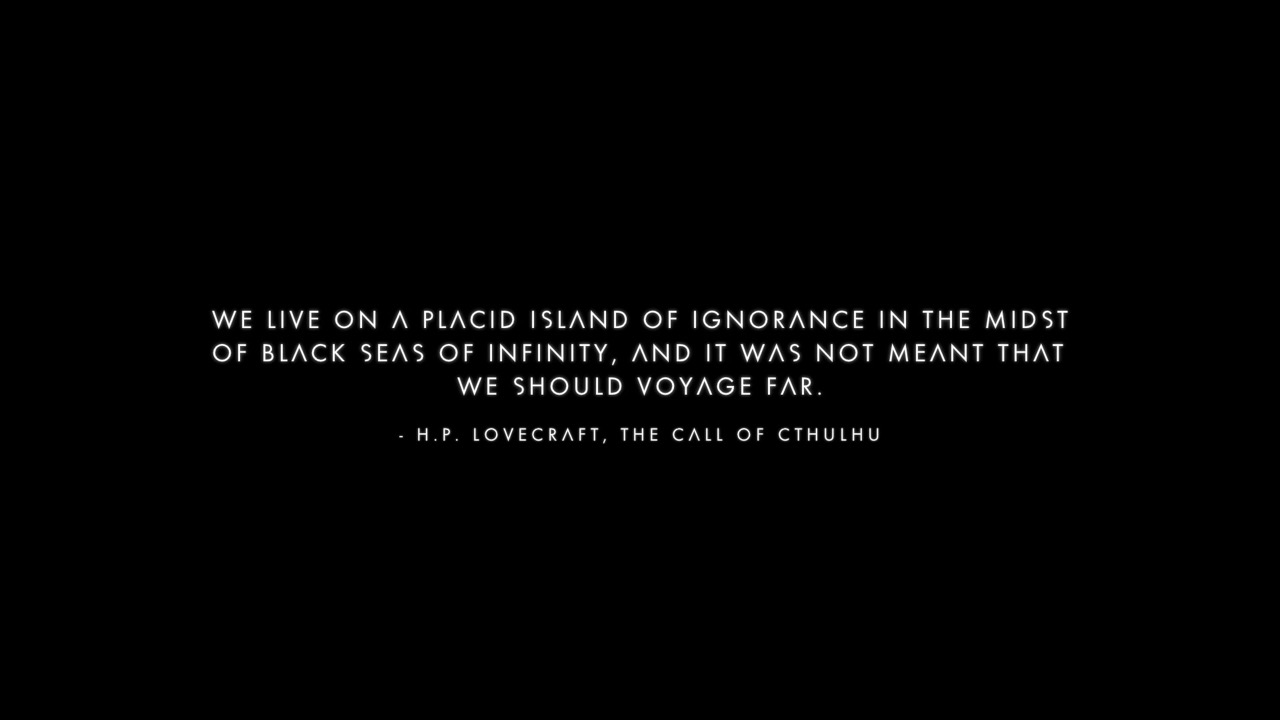 If you can avoid their attacks for long enough, this cycle of more powerful Sentinels calling in reinforcements just continues. 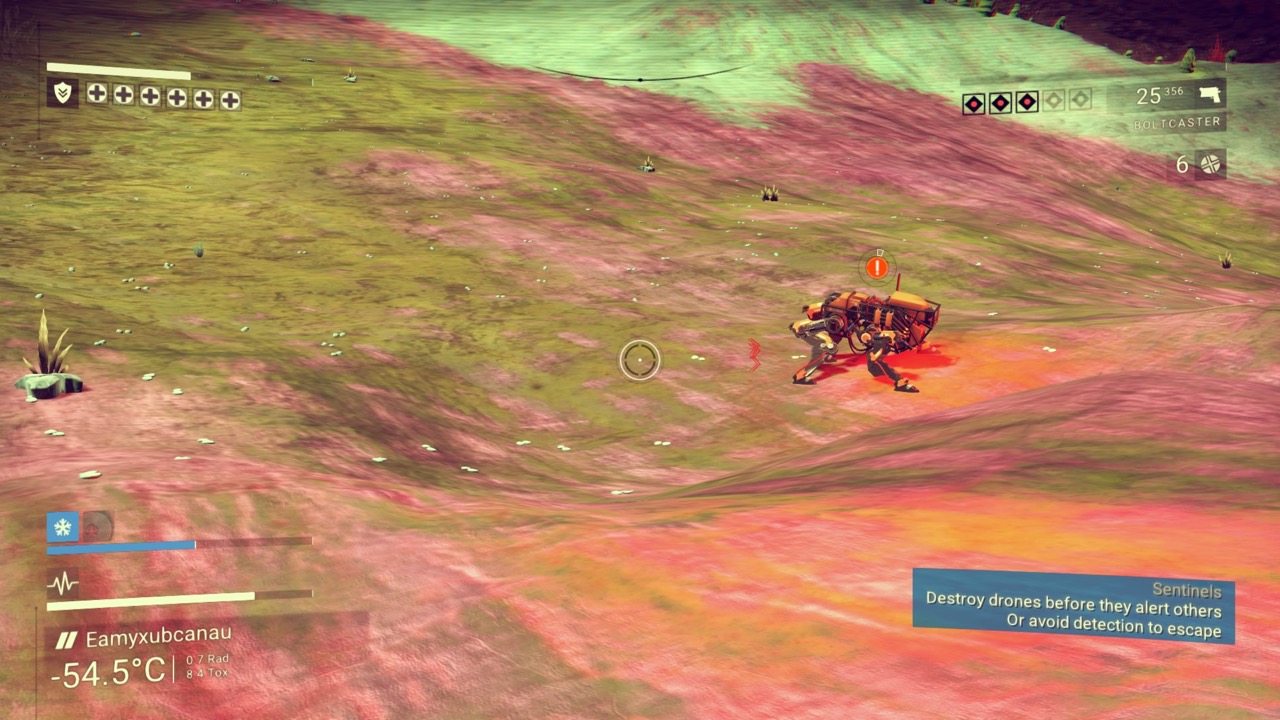 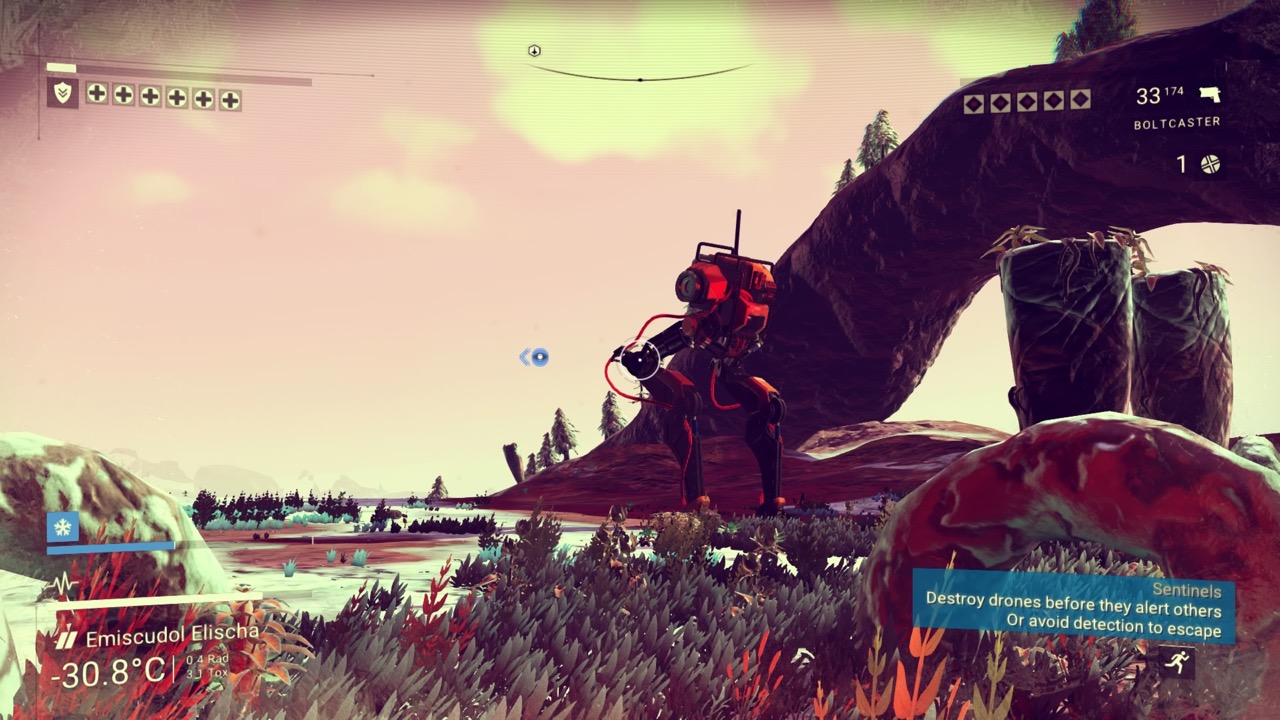 It's pretty easy to farm the low-level ones for Titanium and Technology Components if you can destroy them before they call for help. However, if your shields aren't strong enough or you can't destroy them fast enough, we recommend avoiding an all-out battle.

As you progress through the game, picking up certain resources will trigger a Sentinel attack. Trade Commodities like Gravitino Balls and Albumen Pearls fetch a good price on the Galactic Trade, but be prepared to fight for them.

Titanium farming for fun and profit

If your shields and weapons are strong enough, though, you can choose to fight instead of running away. This is especially easy on planets where the Sentinels are hostile by default. As you can see in the image above, you'll discover Sentinal's level of aggression at the bottom right of your HUD as you arrive on a planet.

What's on the HUD?

No Man's Sky presents you with a ton of on-screen information. Your HUD does a great job of only supplying you with pertinent details, but it can still get a little overwhelming. If you're feeling overwhelmed, check out Polygon's guide to No Man's Sky's HUD, where we explain the various icons and bars.

If you allow a Sentinel to call for reinforcements, you can earn a full slot of Titanium in just a few minutes. With the right recipe, you can combine this Titanium with all of that Plutonium you've been collecting into an alloy called Lemmium, which you can sell for 30,937 units each. 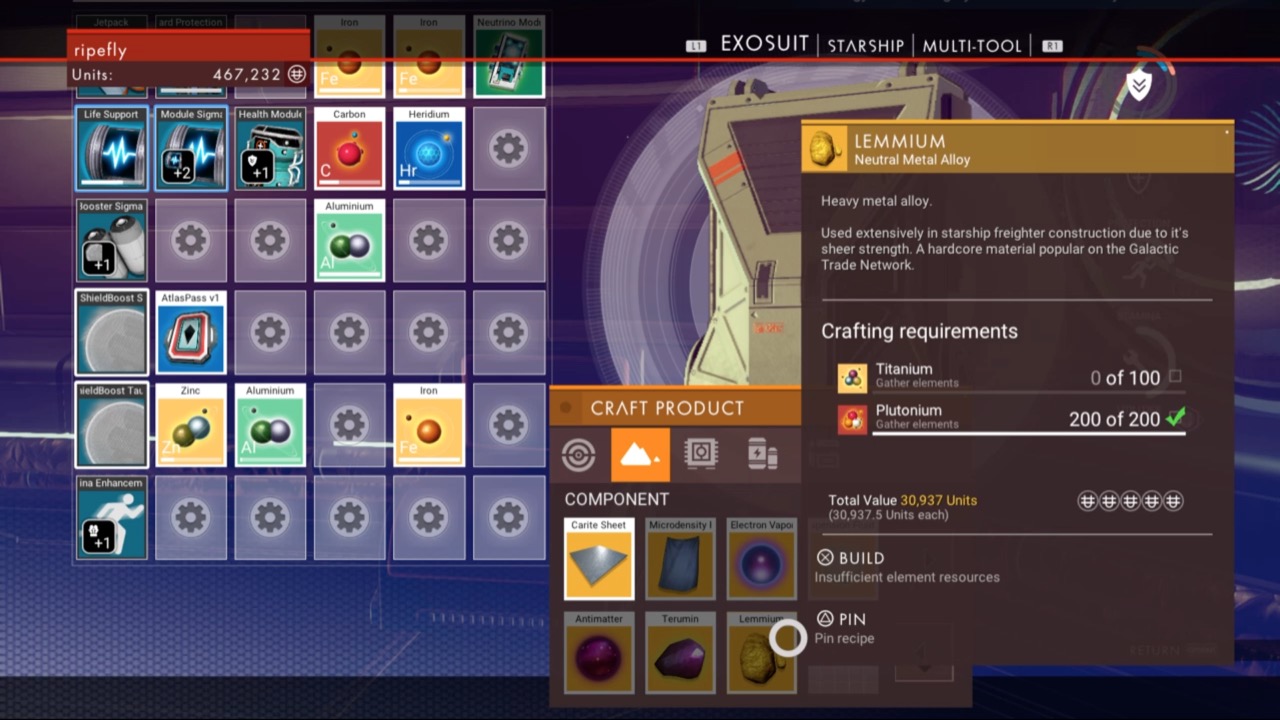