It's all about distance (and there are two kinds of distance)

Share All sharing options for: No Man's Sky guide: black holes, warping and the two kinds of distance (correction)

In No Man's Sky, your journey to the Galactic Core might feel impossible, but there are shortcuts to cut down on your astronomical commute time. Luckily, the black holes of the No Man's Sky universe are the Deep Space Nine kind, not the "Treehouse of Horror 6" kind.

Why you should use black holes

Maybe you need to dodge some Starship payment bill collectors or just need a change of surroundings to really reinvent yourself, you know? Black holes can help. They will move you to a seemingly random system that could be anywhere in the galaxy, but is generally about 1,500 light years closer to the Galactic Center.

How to find black holes

There are three ways to find black holes in No Man's Sky. The first is to stumble on them organically. You will receive an "Anomaly Detected" notification with a spiral icon in your warp menu. You can follow this to a system with a black hole.

You can also ask Nada for a location any time you speak. Choose the "Find a shortcut to the center" dialogue option, and Nada will give you the location of a nearby black hole.

Instead of relying on those methods to find a black hole, you can complete the Atlas story path. After you complete your final interaction, black holes will be automatically marked on your warp menu. Look for three gray corners, like in the image below. 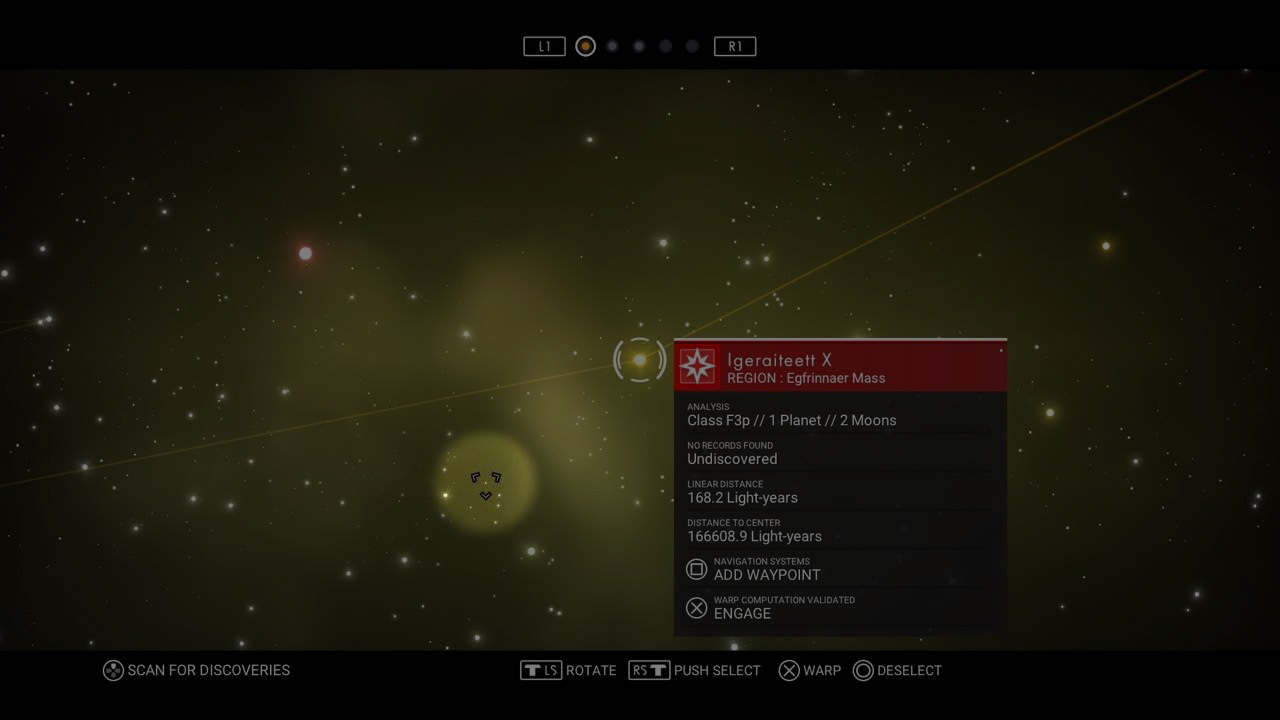 Using your warp engine instead

Black holes are one way to travel long distances. Your built-in Warp Engine is another. To make full use of your Warp Engine's range, you'll have to turn off your targeting computer. When you enter you warp menu, choose free exploration mode. Now, channel your inner J.J. Abrams and steer toward the lens flare. The brightest and largest star is the Galactic Core. 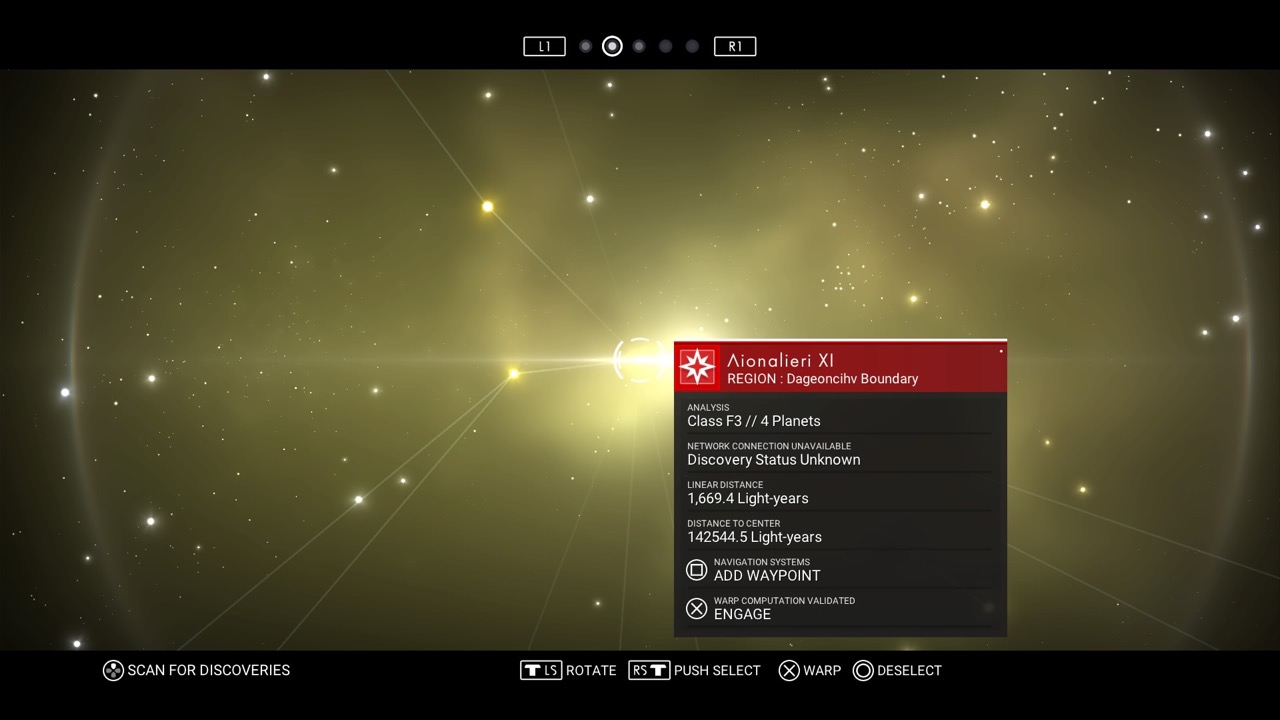 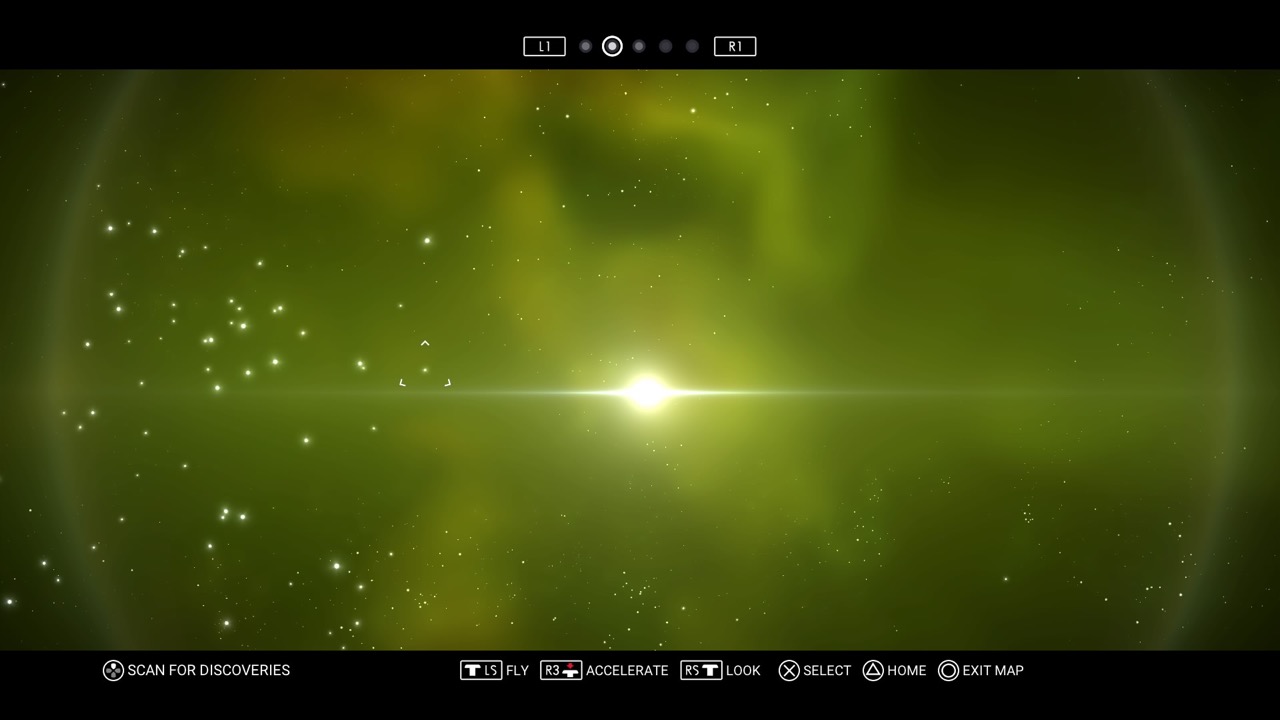 Move toward the Galactic Core, periodically checking stars to make sure you're still in your Warp Engine's range. If you end up too far away, just back up a little until Engage becomes an option again.

Measurements: figuring out how far you really travel

Here's what we originally wrote:

Based on our extensive testing, a black hole will move you hundreds of thousands of light years (let's call it) left or right, but only about 1,500 light years toward the Galactic Center. If you have the blueprints, though, and devote the time to gathering the resources, a fully tricked out Warp Engine with the Sigma, Theta and Tau Companion Units installed can move you a little over 1,600 light years at a time with no danger to your ship.

That's where we went wrong. We did not take into account the road-like nature of hyperspace travel in No Man's Sky. Our assumption was that choosing a target 1,600 (linear) light years closer to the center would take 1,600 light years off of our Distance to Center. That is not the case.

Which should you choose?

So what's best? If you're looking for speed, a combination of the two. Choose the farthest black hole you can warp to, then use it. You're going to want to keep a stock of common elements at hand so you can fix your ship periodically, reducing the chance that something important or expensive gets broken. If you're protective of your ship, those four jumps as opposed to two probably aren't going to cost you that much extra time once you add in the repair stops.

Correction: Based on our testing, a previous version of this article concluded that black holes weren't much help, at least when compared to your built-in, fully upgraded Warp Drive. As commentors SonicBluth and deeze67 pointed out, our math and assumptions were incorrect. We thank them for their corrections, and we've revised the article based on new information and further testing.