Exactly what do you do in No Man's Sky?

Share All sharing options for: Your biggest No Man's Sky questions, answered

No Man's Sky is, in the broadest possible sense, an open-world sandbox game. Think of it like Grand Theft Auto, except the size of a universe.

For nearly three years, developer Hello Games has slowly teased the shape and possibilities in No Man’s Sky. But there was still much we didn’t know. Today, that changes. No Man's Sky is here, and we know the answer to the age-old question, "Just what the hell do you do in No Man's Sky?"

Yeah, so what do you do in No Man’s Sky?

Whatever you want. That probably seems unhelpful, but it's a fundamental tenant of No Man's Sky. Stick with us here.

Difficult as it may be to wrap your mind around, Hello Games really did build an entire universe. In that context and from your first moments, you're free to do as you please.

If you're looking for some advice about No Man's Sky's open-ended nature, then you're in luck because we've got some right after this colon: Feel free to do as you please as often as you want. There's no rush, no hurry, no timer counting down to an objective. Take your time and explore.

Why? Because the universal scope might not be the most remarkable part of No Man's Sky. This might just be, though: With No Man’s Sky, Hello Games built an entire universe that's worth exploring.

Point your space face or starship in any direction, and you'll find something to do. In fact, that's often the most interesting way to roleplay as a galactic adventurer — just head in a direction and see what’s there.

That said, just because you can do anything doesn't meant that you always should. There are things you should do in you first few hours, and we’ll get to that next.

OK, fine. Very clever. What should I do in No Man's Sky?

When you start playing No Man’s Sky, there are four broad things that you should do:

No Man’s Sky does a pretty good job of reminding you about what’s important, but probably not in the way you’re used to. Current goals and quests appear in periodic notifications that materialize and disappear from the bottom right of your screen — not in easily accessible menus. You can see one of those in the image above.

If you’re anything like us, this can introduce … certain complications.

You may set off on an alien planet with a goal in mind, but the best of intentions evaporate as you wander among the pretty, shiny things. If it occurs to you that you’ve lost 20 minutes converting red crystals to Plutonium and you have no idea why you’re here, just keep an eye on the bottom right of your screen. No Man’s Sky will remind you.

How do I save and quit?

Even the most intrepid explorers need a break, but you won’t find save or quit buttons in No Man’s Sky. So how do you take a break without losing your progress? In two broad ways: do something significant or perform certain actions.

At the beginning of the game, the best way to save is to enter and exit your spacecraft. In fact, that applies throughout the game, too, because the act of leaving your cockpit triggers No Man’s Sky to create a restore point, as indicated by the Restore point saved dialogue in the image above. If you meet your untimely demise in the game or close the game, you’ll resume your progress from there.

Later in the game, you’ll find Waypoints scattered around planets.

Activate those, and you can save the game manually there. You’ll also create a restore point, automatically.

Yes, it feels weird not having a title menu to return to, but that’s the way of the universe in No Man’s Sky.

How do I build things?

Crafting — or building — is a big part of No Man’s Sky, and building things follows a simple pattern: gather resources and then hang out in the menus.

In the screenshot below, we’ve selected an empty slot in our Starship’s inventory and then pressed the square button on our DualShock controller. That loads the Craft Product menu. The items you can build appear in there.

At this point, we happen to be crafting the Warp Cell, but the same basic logic applies to building everything. Things you can build all have crafting requirements. For the Warp Cell, that’s 100 units of Thamium9 and one unit of Antimatter. The green checkmarks next to the requirement are a visual indication that we have what we need to build the item. Press and hold X (on the PS4), and moments later, we had ourselves a Warp Cell.

Anything you can make out of component parts has a ​Recipe. Sometimes you just know these Recipes, and sometimes you have to seek them out. The most important Recipes will be part of a dedicated side-quest. Just like the ​Component Units​ for your equipment, once you learn a Recipe, you’ll always have it.

Without resources, you can’t do much of anything in No Man’s Sky, including survive. Lucky for you, there are resources everywhere. You don’t begin the game with much, but you begin with enough to start harvesting the elements in the alien world around you. At the beginning of the game, that’s exactly what you need to do.

At first, it's all about wandering and discovering things along the way. Good news: What you do and what you learn in your first hours will still apply dozens of hours later. Looking for flashing things and approach them. You can probably break them down into their component parts, or elements. 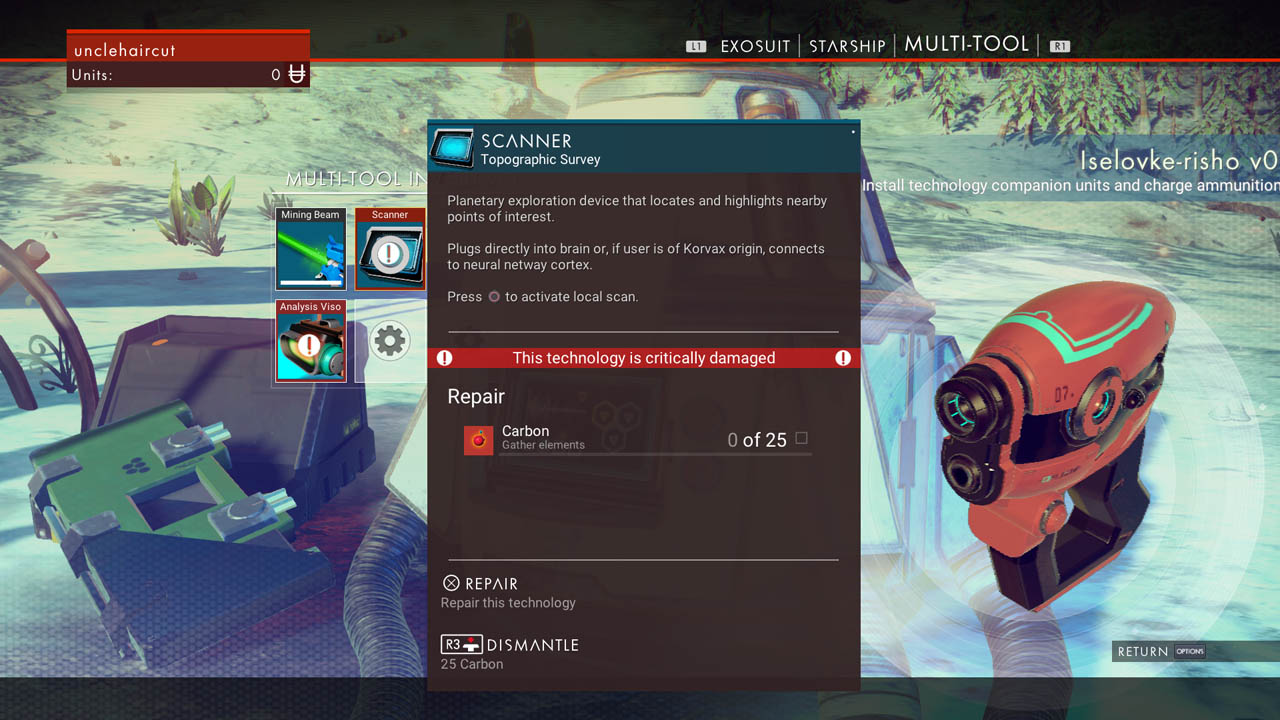 Work with the tool you have, which No Man's Sky calls the Multi-Tool. Pull the right trigger on your controller, and you’ll fire a green beam of light into the distance. Direct that beam at plants, animals and even rocks, and it’ll reduce them to their basic building blocks: elements.

Pay attention, and you’ll see patterns emerge. As a general rule, organic things will give you Carbon. That applies to trees and plants and animals — all carbon-based lifeforms. Most rocks are little more than vessels filled with Iron. Big rock-like monoliths usually break down into rarer materials like Emeril (which you can trade for cash inside of space stations) and Heridium (which you’ll need to fix your starship’s Pulse Engine).

Sometimes, it’s as simple as walking up to a flower that blinks every few seconds and pressing the square button to extract, say, Zinc. Other times, you need to aim your Multi-Tool and shoot at a plants to extract Carbon or Iron. Your HUD will tell you whether you can extract with the press of a button or the pull of a trigger.

How do I get my Scanner working?

You need to find 25 Carbon, which you can extract from organic lifeforms like plants and trees. We’ve got the full rundown in our beginner’s guide.

How do I repair my Launch Thruster?

Your Launch Thruster allows you to take off and land, which are two very important functions of a spaceship. In short, you need four Carite sheets. Thing is, you have to build them yourself.

You need to craft four, each of which costs 50 Iron and requires an empty inventory slot. When you use them, they disappear from your inventory.

How to I charge my Launch Thruster?

OK, so you’ve got a working Launch Thruster. But it’s hungry. You need to feed it Plutonium. Search the area for red crystal formations, and zap them with your Multi-Tool.

How do I upgrade my Analysis Visor?

Gather 20 Iron to repair you Binocular Tagging Device, whcih lets you zoom and tag animals and various other things. Even if this sounds boring, it’s worthwhile — especially in the beginning of the game. Tagging and uploading your discoveries gets you money, or units in No Man's Sky’s terminology.

They’re the little flying robots that appear as soon as you start breaking down the items on a planet into their component parts. We’ve got the full rundown in our No Man's Sky beginner’s guide, but the long and the short of it is: Don’t mess with them. They’ll attack if you harvest too much. Run away or destroy them.

How to I repair my Pulse Engine?

This one’s as tricky as they come at the beginning of the game. You need to collect the following:

How do I charge my Pulse Engine?

You need Thamium9. Look for plants that have three or four stalks, like the one above. Don’t stress over this too much at the beginning of the game, though. You don’t need it to leave the planet, and our No Man's Sky beginner’s guide tells you where to find impossibly large quantities of Thamium9 in space.

If you’ve wandered away and you don’t know how to get back to your ship, there’s an easy way to find it. Look at the top of your HUD, and you’ll see a bent white bar. Turn around until you see a blip on the bar like the one in the image above That’s your ship.

How do I leave the planet?

Repair and refuel your ship, following the steps above. Then take off and point up. It gets a little bit confusing when you’re staring at nothing but the sky, though. Thankfully, No Man’s Sky includes a HUD element that informs you of your angle. Adjust your heading until you’re close to 90.0 degrees, and you’ll be in the lifeless vacuum of space in no time.

Be sure to check out the rest, where you can learn all about your ship and your Multi-Tool and Companion Units. We also have a guide to No Man's Sky's resources that'll teach you the difference between Oxides and Silicates and No Man's Sky's various elements.