Share All sharing options for: Drawn to Death review

Drawn to Death makes me feel like I’m in study hall again, because that’s the last time I felt this kind of sullen-eyed, belligerent presence.

I didn’t want to be in the same room with it then, either.

I’ll give Drawn to Death this — it perfectly channels the persona of teenage resentment, pushing you away before it can be rejected, all but telling you it knows you won't give it a chance because of the language it uses and the violence it glorifies. Exactly 0.0 percent of that bothered me. If you opt in to Drawn to Death, you’re volunteering to be called a cocksucker by an aloof, vivisectioned frog, hearing the arena announcer describe holding in a big shit (in second-by-second detail, over the course of a solid minute), next to commentary about your mother's drinking and masturbation habits.

What makes that abuse intolerable is the lack of an understandable game underneath it all. A handicapping system that I still can’t fathom makes a single kill an arduous, attritive affair sometimes consummated over the course of a couple of respawns. Over-the-top super moves specific to each of the game’s six fighters don’t have any easily remembered or intuitive input, and require too much precision to be useful.

If a multiplayer-only game is going to roll with such a spartan roster and matches capped at four players, the combat needs to be tight, understandable, and bringing the player back for just one more. Drawn to Death didn’t do that. Its modes are mainly the textbook deathmatches we've seen everywhere else, and done a lot better, before.

Even trying to scrounge together three other competitors, after a week, there wasn't enough of a population to let me choose the mode I wanted to play. And once the match is done, it'll take several minutes to return to action. Drawn to Death cries out for some kind of an instant rematch, maybe swapping teammates, anything. The deliberation involved in finding a game makes leveling up characters and unlocking new weapons chorelike and unfulfilling.

All the combatants have standard firearms, grenade and melee attacks. These are easily understandable, but with the high damage required to make a kill, they don’t provide much of a basis for fundamental competitiveness. The special attacks have very long cooldown times and can be easily wasted.

A good example is Diabla Tijuana, who can sling her cowboy hat Oddjob-style. It does pitiful damage on the initial throw. It’s in the return where it deals the most damage. Given that no one in this game stays in one place (much less on the ground) for longer than 1.2 seconds, connecting with that hat was mostly dumb luck.

She has a whip attack with pitiful range. Moreover, it cycles through three different damage levels. Again, the kind of precision and timing this needs is burdensome and deleterious to any sense of fun while absorbing gunfire waiting for the right time to attack.

Johnny Savage, the punk rocker with a fake British accent (though given punk’s history, this might be deliberate) has a a special attack that is completely counterintuitive. You must hold the R2 button to activate it, which forms a pentagram — in a display of cross-genre musical muddiness — and you release the trigger to fire. After that, you’ll have to hit R2 again to detonate the attack, then hit R2 again to summon a demon whose area of effect is nowhere near as strong as it should be. It was frustrating just trying to get the hang of it in the tutorial.

I suppose that the long charge-up actions inherent in Drawn to Death’s special attacks are why everyone has to be able to absorb a lot of damage. It would be much more enjoyable to just fire the damn things with a button press and let the long cooldowns thwart their overuse. I strongly recommend visiting the shooting gallery, which at least supplies pop-up cards with step-by-step instructions.

My problem with Drawn to Death isn’t so much the random nature of each character’s attributes, strengths and weaknesses. This isn’t a class-based shooter, after all. It’s how the game castrates the balls-out power it wants to project with long cooldowns, inscrutable lock-on times and a meter buried in the game’s murky HUD that controls how much a player can use a special movement.

It’s a shame, because the six characters are very creative and it feels like there’s a lot of depth to them, until you understand how long it will take to find it. You need to be seriously committed to arena shooters to endure the toilet-swirly the game gives to novices, and with every character ranked up individually, you’re going to be a novice for about 60 matches.

Oh, and about that handicapping system (which was revealed to me only in a loading screen tip). Damage counts pop up off targets; if they’re green, a player is doing less damage than usual. Purple, and they’re doing more. Or maybe it’s the other way around (I am also colorblind). My point is, why am I doing less-than-usual damage with a character I haven’t yet used against a more seasoned opponent? Also, as is frequently the case, my teammate in a two-on-two deathmatch bailed out. The announcer, with gusto, announced he was "buffing the fuck out of" me, or something to that effect. But I was playing as Johnny Savage, and buffs don’t do anything to make his precision attacks more useful.

The fact that people drop out, even after waiting five minutes, turnkey, for each match, even when this game is given away to every PlayStation Plus subscriber, feels fairly damning to Drawn to Death’s long-term — hell, its short-term — viability. I never had an a-ha moment where I found myself wanting to play more Drawn to Death or try out another new character. If the skoads, as we called these kinds of misfits at my high school, had an endearing quality, it was their timely ability to punch up. The game’s few compliments of my work seemed just-fuckin’-with-you insincere. Drawn to Death affects the disaffection of a sophomore outcast but rains antagonism on you like it’s the football captain.

The game has virtues, and it’s apparent which parts its creators really enjoyed making. The illustration style (but not the floaty movement animations) is visually appealing, and the doodled-notebook motif deserves some credit for not being yet another colorful hero shooter. The maps are reasonably confined, and offer useful elevations and tunnels to run through and hide in. The camera isn’t much good for trying to improvise hiding around corners, though (Diabla, also, is the only character who can crouch or kneel).

Drawn to Death fails the fundamentals

It’s possible that with a major attitude adjustment, and by buckling down on fundamentals rather than balancing the game with "this guy does a lot of damage to that guy for some reason," that a capable arena shooter can emerge.

That’s what’s so frustrating about grading a game like Drawn to Death. I know it could do better if it applied itself toward the little things it doesn’t like doing as enthusiastically as the things it does.

Our review of Drawn to Death 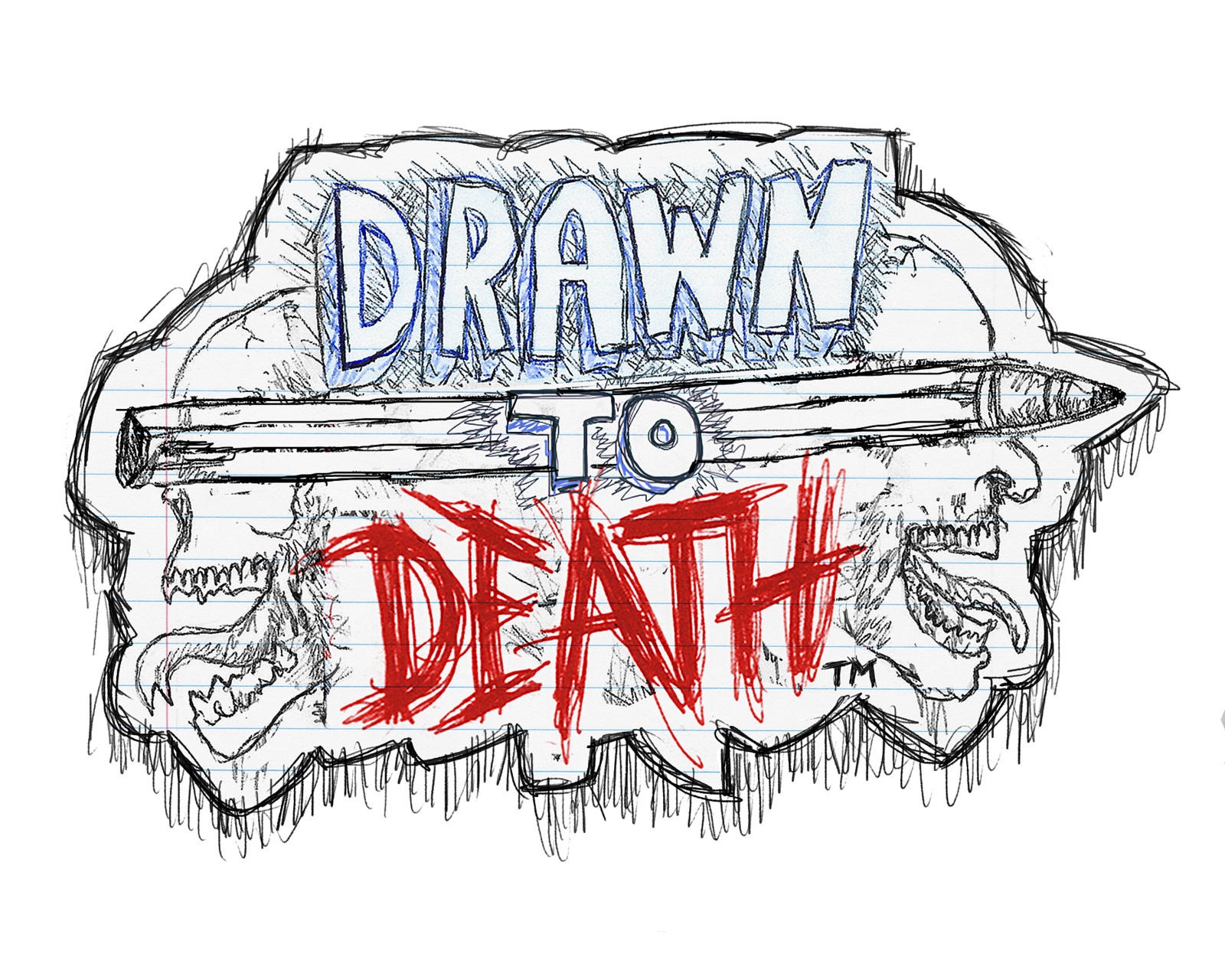