Share All sharing options for: The One Ring tabletop RPG is a cozy take on The Lord of the Rings

Tabletop role-playing games made a massive mark last year, with more crowdfunding campaigns crossing the million-dollar mark on Kickstarter than any year before. Chief among them was The One Ring, the second edition of the award-winning RPG system first published in 2011. The campaign earned more than $2 million, because of course it did: The Lord of the Rings trilogy, and its precursor The Hobbit, is the granddaddy of virtually all forms of role-playing, one of the lodestones of the genre and one of the most well-known fantasy franchises of all time.

So how do you make a modern tabletop role-playing game (TTRPG) out of something so beloved and so well-known?

In the age of the legacyquel — that is, additional tie-in media created well after the publication date of the original piece — it feels like a hard arc to make Tolkien’s Middle-earth stand out among all the derivative mythologies that have sprouted up around it. The Lord of the Rings exists in every size imaginable, on every computing system, game console, television screen, and for every age level. The challenge here is to make sure that this TTRPG appeals to both fans who grew up with the franchise and fans who have never truly grappled with the original texts. It needs to feel compelling without becoming cloying; welcoming without being watered down.

Polygon Recommends is our way of endorsing our favorite games, movies, TV shows, comics, tabletop books, and entertainment experiences. When we award the Polygon Recommends badge, it’s because we believe the recipient is uniquely thought-provoking, entertaining, inventive, or fun — “and worth fitting into your schedule. If you want curated lists of our favorite media, check out What to Play and What to Watch.

The system’s core rules, a book titled The One Ring: Roleplaying in the World of The Lord of the Rings, attempts a fresh take on Middle-earth by focusing on the parts of Tolkien’s world that are decidedly not epic. It establishes the timeline first; this is the twilight of the Third Age, a game set after the events of The Hobbit yet before the call-to-arms in The Fellowship of the Ring. This creates a sense of growing dread amid contemporary mundanity. The problems are not world-shattering; they don’t threaten to split apart Middle-earth. This is a game written for fans who want relatable stories set against the sweeping lore of The Lord of the Rings.

That’s not to say that there aren’t mechanics in place for epic fights and longer encounters, but there are no armies, no war. You won’t be leading the Horse-Lords as they reclaim the lands of Rohan from the Dunlendings, but you and your friends might have to figure out how to muck out Farmer Maggot’s stable and still get home in time for second supper.

The maps, included inside the front and back covers of the book, are presented in both the ink-on-parchment style of the original novels and as a field of colorful hexes, a la old-school Dungeons & Dragons world maps. Together, they detail the places in Middle-earth that are often glossed over in favor of other, more sweeping landscapes. The characters will explore Hobbiton, not Lothlorien; fights happen in Weathertop, not Minas Tirith. This game is firmly established in Eriador, the land west of the Misty Mountains, far away from the legendary and foreboding Mordor. The cultures within the book are people from the Shire, from Bree, and from Lindon. Ironically, there is no mention of the one ring at all inside the book, except as a brief note under Traveling Gear on a pre-generated Bilbo Baggins character sheet. In fact, there are only a few pages at the end of the Loremaster’s chapter about the Eye of Mordor detailing what might actually trigger Sauron’s ire towards the player’s small, far-away company in the first place.

Lead writer Francesco Nepitello has clearly limited the scope of the game itself, but not to its detriment. With clarity and an eye for detail, the world-building in the book establishes the boundaries of the player characters’ experience, before focusing on the ways that they can break through those boundaries by physically journeying through the map. It establishes limitations, then immediately invests players in breaking through them. The One Ring places an emphasis on small-stakes plot hooks and overland travel. This means that the structure of the RPG not only slots perfectly within established canon, but also gives those unfamiliar (or even disinterested) in the original media opportunities to explore a subtly wonderful land in any way they choose. 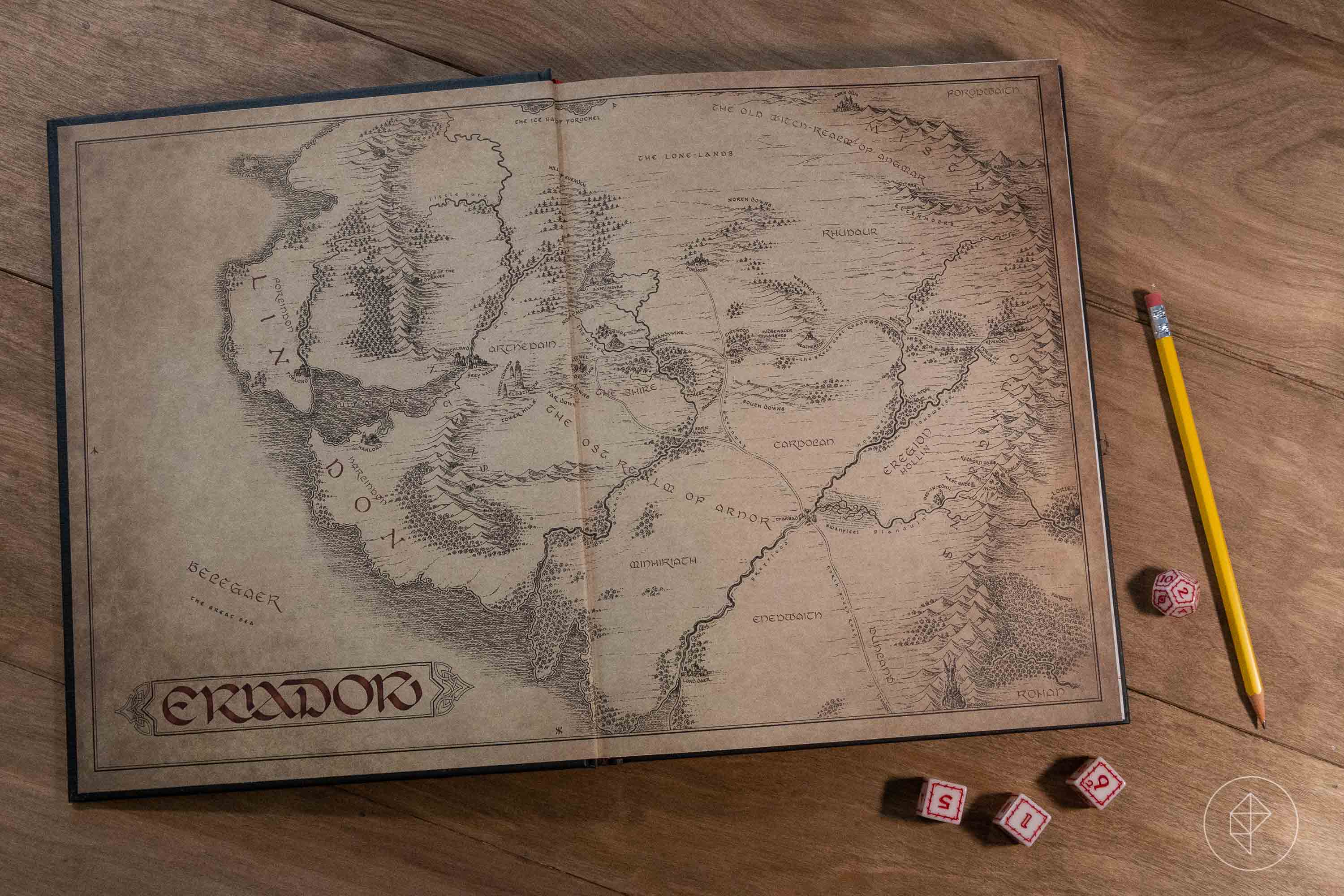 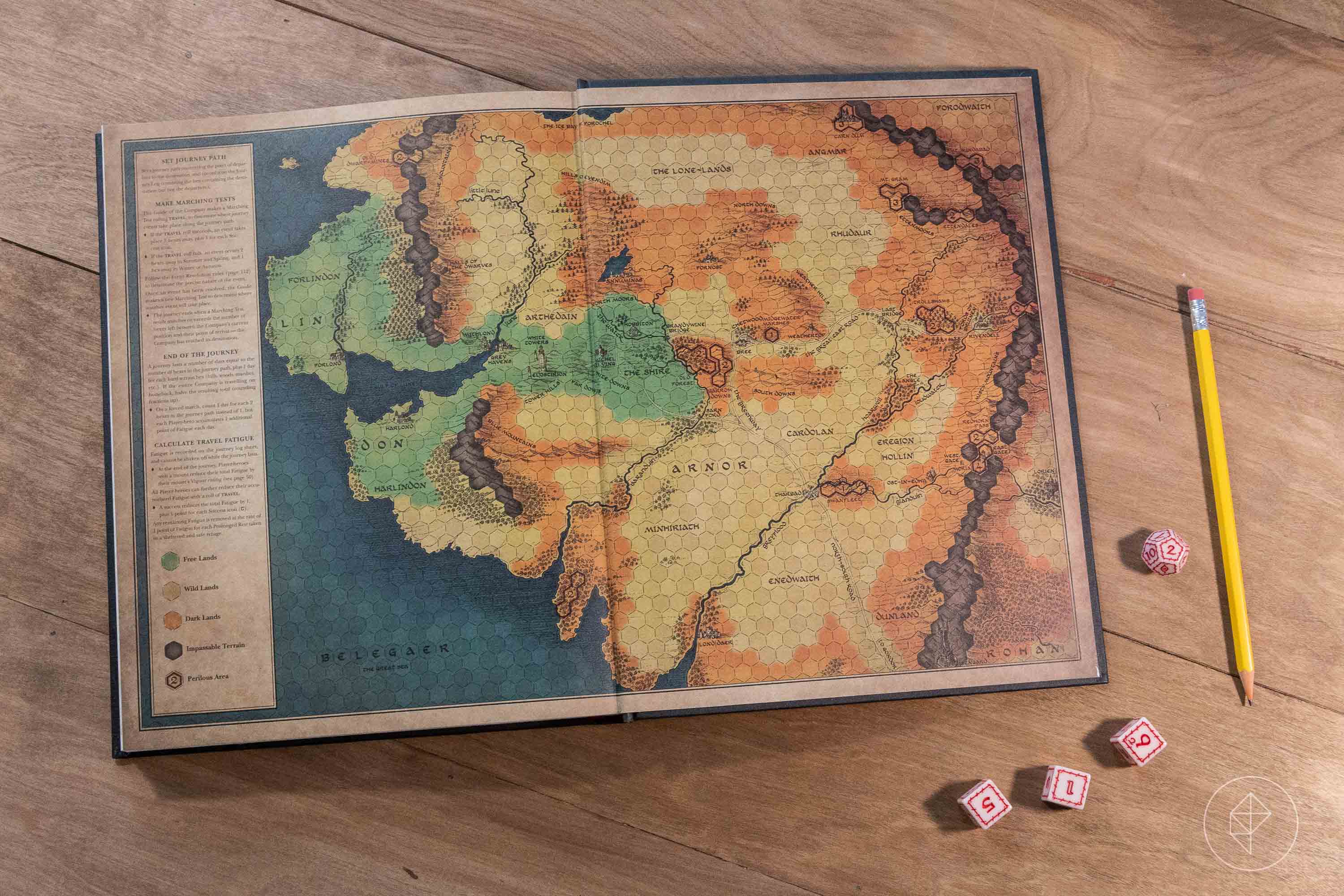 This is made exceptionally clear with The One Ring: Starter Set, the system’s introductory boxed set. Two of the three slim books inside that box, titled The Adventures and The Shire, both contain premade scenarios for the player characters to explore. However, you won’t find any wizards or kings within them. Eriador is not a land of firm borders and powerful empires, but a rural landscape of interconnected friends and family, local legends, and secluded communities. The Adventures book itself is a series of five scenarios starring Bilbo Baggins as the lead non-player character who instructs the players, gives them small quests, and helps them ease into the longer journey to come.

The unique game system uses a pass or fail d12-based dice-rolling mechanic, with a character’s statistics and skills helping to determine success via additional d6 dice rolls. Each player knows the target number they need to hit in order to pass a given skill check, so the game master (called a loremaster here) isn’t even required to judge the outcome. That tends to speed up play, and it also enables the loremaster to instead use the quality of a given dice roll — a 12 being an automatic success, 1 an absolute failure — to steer the fiction, creating investment for both the players and the loremaster with every roll. The game does recommend using custom d12 and d6 dice, both of which come included with the Starter Set, but it’s also fairly easy to rely on standard dice instead.

There are two phases to the game structure: an Adventuring Phase and a Fellowship Phase. After the more typical Adventure Phase of the game, where characters encounter scenarios and have to trick, fight, or run through the various obstacles in their path, the Fellowship Phase is a time of rest and upkeep. Players are given a chance to assess the progress recorded on their character sheets, calculating if they have raised the valor or wisdom of their characters enough to upgrade their weapons or their skills. They also have a chance to prepare for the next adventure, raise an heir (in the form of a new character), or change their character skills. This reminds me of Ryuutama, the Japanese cozy journey game by Atsuhiro Okada, where players focus on the journey through the landscape without too much time spent on exactly which landscapes they’re passing through.

Both games have a sense of some kind of hidden darkness at the edges of the map, but don’t approach it with any interest. It’s there, but it’s ancillary. The One Ring also has a sense of earnestness to it, the kind of adventures you go on when you don’t have to deal with the threat of wars or invasion. It’s an interesting space to occupy, narratively, creating a liminality within the gameplay itself. While the epic lore of The Lord of the Rings hangs heavy over The One Ring, the game very deliberately focuses on the pastoral valleys and shires of Eriador, much like Ryuutama creates its mythology around exploration and small-town drama.

A third similarity to Ryuutama is the existence of a patron. The loremaster is encouraged to give the group a wise and powerful member of Middle-earth to guide the fellowship through their journey. The patrons listed in the book are canon characters, some familiar (Gandalf, Bilbo) and others more obscure (Cirdan, Tom Bombadil). They help to tether an otherwise humble setting to something grand and, if the campaign carries onward, potentially something truly epic in its own right.

By firmly setting The One Ring within a microcosm of a massive, familiar world, the book pushes the narrative beyond the traditional hero’s journey — the same push against traditional heroic structures that Tolkien himself commented on in his books. There’s still space for the pervasive classic swords-and-sorcery roleplaying that many people love, but there’s also an acknowledgment that sometimes the hero’s journey really can be just going there and coming back again.

The One Ring: Roleplaying in the World of the Lord of the Rings and The One Ring Starter Set come out on March 22. Both are available for pre-order at the Free League online storefront. The game was reviewed with a pre-release copy of the physical products provided by Free League. Vox Media has affiliate partnerships. These do not influence editorial content, though Vox Media may earn commissions for products purchased via affiliate links. You can find additional information about Polygon’s ethics policy here.