Apollo 47 is a one-page RPG with 1,199 additional pages of flavor text

Share All sharing options for: Apollo 47 is a one-page RPG with 1,199 additional pages of flavor text

You know those scenes in movies where people are talking very urgently into a headset? Maybe it’s a heist film and someone’s crawling through an air duct, or it’s a science fiction film and a lonely astronaut is hurtling toward their doom. Whatever the context, that’s the vibe that game designer Tim Hutchings is trying to recreate with his latest project, Apollo 47 Technical Handbook, a one-page tabletop role-playing game with 1,199 additional pages of largely superfluous flavor text. It’s ... a bold choice, to say the least.

But Hutchings isn’t just some random developer. He’s the author of, among other things, Thousand Year Old Vampire, one of the most critically acclaimed solo journaling games ever made, a concise and introspective investigation of how the long arc of history weighs on a person’s soul. He’s also an assistant professor of game design at Bradley University, responsible for molding young minds and ushering them out into the larger game development industry. A new game from Hutchings is sort of a big deal, even if it’s a weird one. Well, maybe especially if it’s a weird one.

“I pride myself on being an odd jobs person,” Hutchings told me during a recent interview. “Yeah, I used to have — and this is one of my sad secrets — a pretty vigorous showing-artwork-in-galleries-and-museums life. I still do that. I still do all these things, but in a lesser sense since having a kid. [I’m a] TV commercial and weird high-end video post [production] guy. Last night I was working on opening credits for a feature film for Netflix. [...] All kinds of shit.”

The work he most enjoys, though, is designing games.

“The only reason I make games is because games satisfy a need, the creative need, that art never did,” Hutchings said. “And so I bring art thinking — for better or worse, and all the self indulgences and miseries that includes — to the way I think about games.”

With that in mind, Apollo 47 has to be viewed as a kind of commentary on the current state of TTRPGs. Its very existence begs the question: Why do we need an entire library of books, hundreds of pages each, to just play pretend with our friends? It’s that question in part that brought Hutchings from a game with one page to a game with 1,200. It took more than three years, he said, to get things just right. Here are a few excerpts from our conversation, lightly edited for concision and clarity:

Polygon: You said you came to games after becoming somewhat dissatisfied with the art scene. What are the things that art never brought us that you’re bringing with games?

Tim Hutchings: Well, I am not bringing anything worthwhile to the table. I am simply doing that thing where Moe Howard from The Three Stooges falls on his side and he’s running in a circle on the ground and pivoting on his shoulder. And I do that and I laugh and laugh and laugh. And as I do this, things fly off of me and sometimes people like them. That’s what happened. I accidentally made a very popular role-playing game [called Thousand Year Old Vampire].

With some artistic shrapnel.

Just pure chance that it happened that way.

Now you sent me Apollo 47 on purpose, though. What is this thing?

That’s a one-page role playing game. You’ll see it at the very, very, very beginning. Kind of like a little checklist page, maybe with some black redactions and strikeouts on it. And then the rest of the next 20 or so pages are kind of support materials on how to play it right, and maybe some ideas like place names and things you do. And then the other 1,170-ish pages are NASA manuals, in no particular order, that all relate to technical aspects of the Apollo missions, which you can, if you’re so inclined, use as prompts to drive your play.

Tell me how you came to be inspired to write this.

I had been really interested in the kind of communication space of people on headsets telling other people what to do. Like we’re doing the heist, and you’re telling me that I’m crawling through the air ducts. There should be one to my left, and then I’m directly above the bank vault, right? That’s what you’re telling me over my headset, and I’m saying, “Well, there’s bars, and I can hear scrambling in the ductwork.” And so we have these exchanges, like in these films and things, and that’s such a cool space, and I wanted to play in that space.

I kept making these games that just weren’t working, and then at some random point about three years ago I wrote Apollo 47. A little game, and then it sat for a long time. And then it became that tremendous book. Because again, that stupid art spin demands that the things I make have multiple reasons to be around; that they are aware of themselves; that they’re saying things I think are interesting about format and form. And so this tremendously bloated book for a one-page game was when that game clicked as a thing for me — as an object.

The thing I was wrestling with is how do you create resolvable conflict within a two-person headset space that is about someone in another room. That was the problem I worked with a lot. What can you create, and what can I create, and then how do we resolve those? But then I suddenly realized, “Oh, fuck! It’s this NASA headset thing.” It’s not astral projection psychologists from the 1960s and 70s — which was one version of a game like that I made, where they’re describing going through astral projection with one person saying, “Do you see, do you know this shape?” and the other person describing their astral visions, right? There’s so many weird formats.

I don’t work hard. At anything. I don’t iterate. I don’t do all the shit you’re supposed to do.

What sort of meta layers have been generated in playtesting? What have your players really been discussing with each other while they go through this?

I am not a subtle or smart or a person-with-great-depths. I do not see deeper conversations coming out of these things. But also, I’m not very bright or attentive or tuned in. So I’ve never seen people really dig in, in a deep metaphorical way to have multiple discussions. When you actually play this, it’s really absorbing for me — that’s my understanding of how people play it — in the moment.

You’re not being a character. You’re in this weird, tiny, verbal space that you’re trying to push into. And then people keep changing it and morphing it and the doors keep opening, and then suddenly it expands, and you all find some other thing to do. I don’t think there’s a space for subtle, third-tier play. But I mean, smart people could probably do it.

I think one of the really big — because again, my “secret art agenda” is like a Hollis Frampton-esque ability to sit with silence; to sit and just watch systems quietly express themselves, and not have to have anything break the pattern or the system or anything happening. We’re going to watch Zorns Lemma, which is a film where you just watch letters, things that shouldn’t show letters scroll by on a film screen for 30 minutes. What is a game equivalent of that that’s still engaging? Maybe this is that?

That’s a huge reach for me to say that. But I think again, sitting quietly is a really important game skill that I don’t think most games encourage, and this is a game where you can do that. I also think that it’s a really buzzy, hard game to power with our brains. And that’s fun for me. 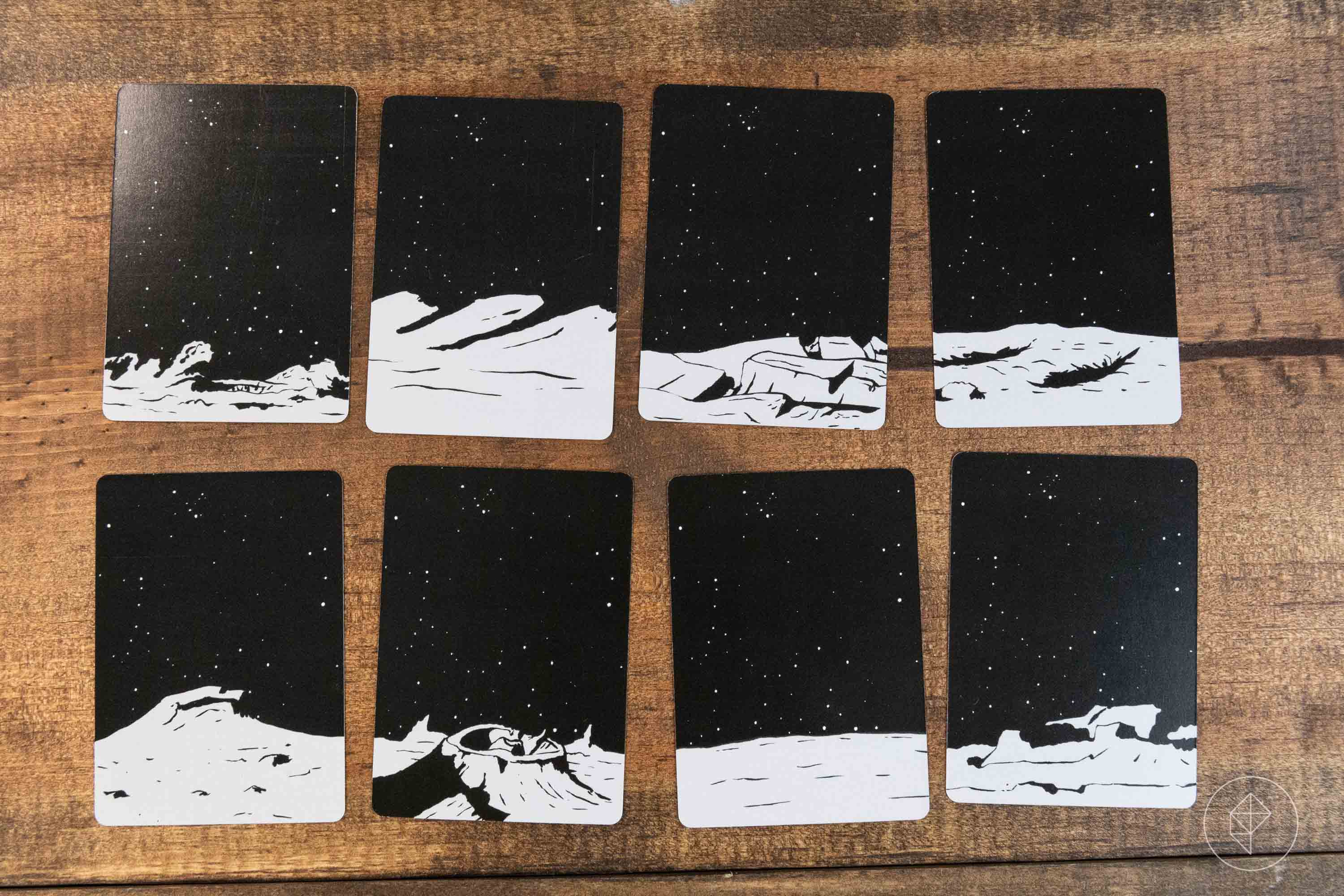 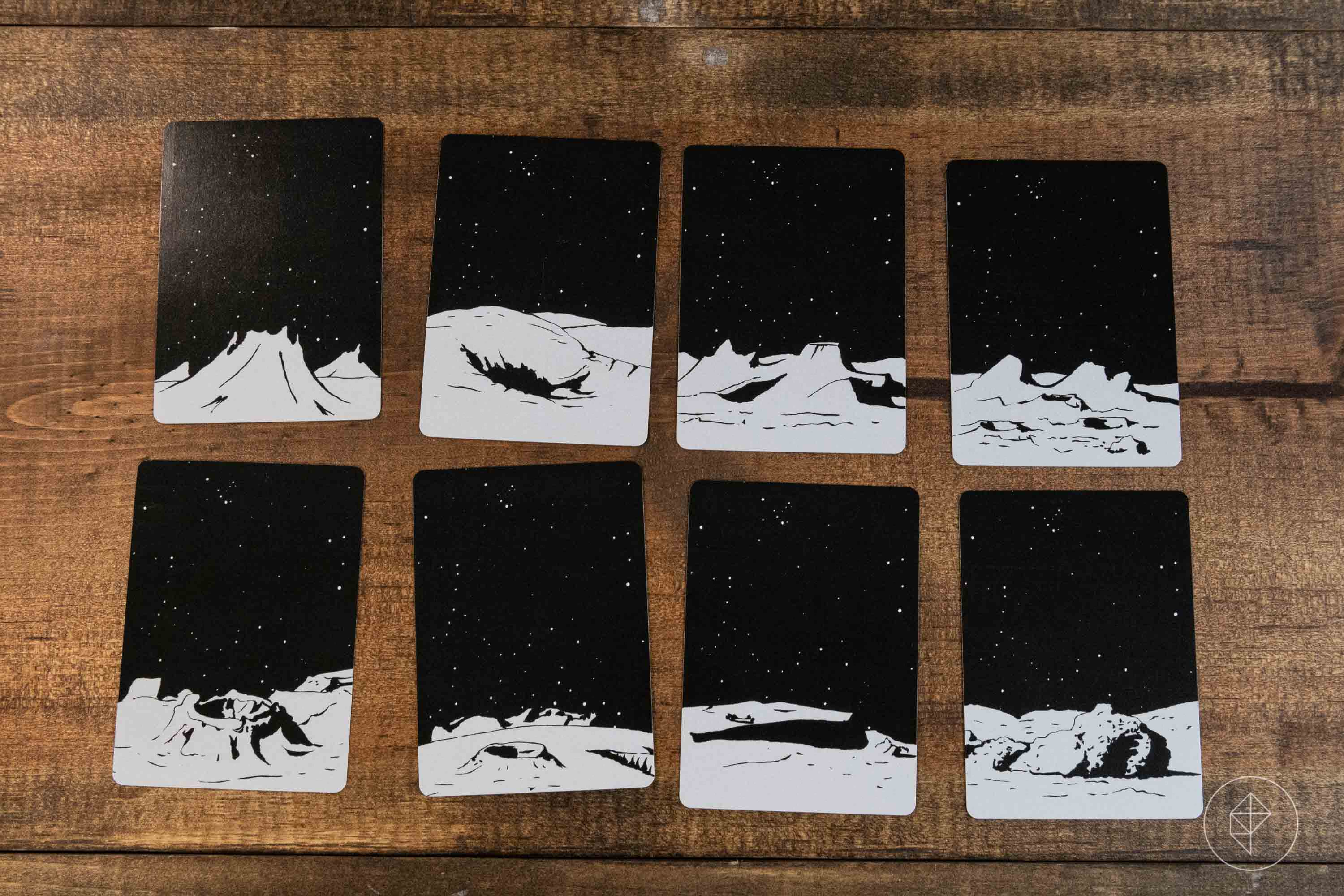 A deck of cards is available on DriveThruRPG which Hutchings refers to as a “terribly unneeded vestigial tail.” Some include snippets of rules or prompts. Others include a moonscape on each side. “If you decide you need a prompt,” Hutchings said, “you can flip over one of the boring moonscapes and on the other side is a slightly — very slightly — less boring moonscape.”
Photo: Charlie Hall/Polygon and Photo: Charlie Hall/Polygon

It’s also a uniquely Zoom-friendly game, I could totally dial up my friends and play the shit out of this and have a good night.

One of my favorite games [of Apollo 47] I ever played was just phone texts back and forth. Super fun, super satisfying.

It’s not that it needs a communications medium, it means whatever communication medium you have, the game can be modified to be people using that communication medium. I could be sticking notes to a tree in the park with someone and checking them every couple of days, and we would just be astronauts leaving notes at a waystation.

When you play the game, you’re not faking another communication medium. When we play Dungeons & Dragons we’re faking that we’re walking through dungeons and chatting and doing that kind of talk. When we do all these other things we’re faking these other spaces. With this, we’re in this space. We’re in whatever space we’re in, whether it’s the phone, or a video chat, or whatever.

Wow! What the fuck! If we’re playing this at a table in person, we are faking being on the radio. Playing it in person is the fakiest way to play it. Damnnn.

Apollo 47 Technical Handbook is available now as a downloadable PDF, and as a physical book with a pay-what-you-want price. The minimum order is $33.24 to cover the cost of materials.

Apollo 47 Technical Handbook was previewed using a physical copy provided by Tim Hutchings. Vox Media has affiliate partnerships. These do not influence editorial content, though Vox Media may earn commissions for products purchased via affiliate links. You can find additional information about Polygon’s ethics policy here.