Trico fights the tricopath, gets hungry

Share All sharing options for: The Last Guardian walkthrough part 18: The trico fight

When the tricopath appears, she pretty quickly attacks you and Trico.

Trico defends you, but he seems to be outmatched — he has admittedly been spending most of his time and energy rescuing you. It's your turn to help him. Run down the stairs on your right (left of the plank-blocked door) and throw the switch again.

This helps, but not a lot, and the fight moves down to the bridge below. Follow the tricos down.

There's a lot going on down here — the trico fight and spear-throwing suits of armor— but you have to ignore it.

Climb over and around the tricos to get behind the tricopath. There's a switch at the end of the bridge, but don't throw it yet. This switch slams the gate shut, but it then reopens. It doesn't do you any good at the moment.

Turn back to the tricos and grab the tricopath's tail. Drag her tail back under the gate. Throw the switch, and the gate will slam on her tail.

This distracts her enough for Trico to fight back, but the tricos fall through the bridge and the fight continues on the next level down. Trico quickly loses his advantage, so you need to help some more. Jump down to your friend.

You'll see a brief Chekhov's Gun cutscene letting you know what you need to do. Climb over the fighting tricos and climb onto the tricopath's back. Jump to the hanging chain and climb to the top.

Run behind the cart and start pushing. The cart crashes into the tricopath's head, knocking loose her helmet. She has a Winter Soldier moment, then takes off. 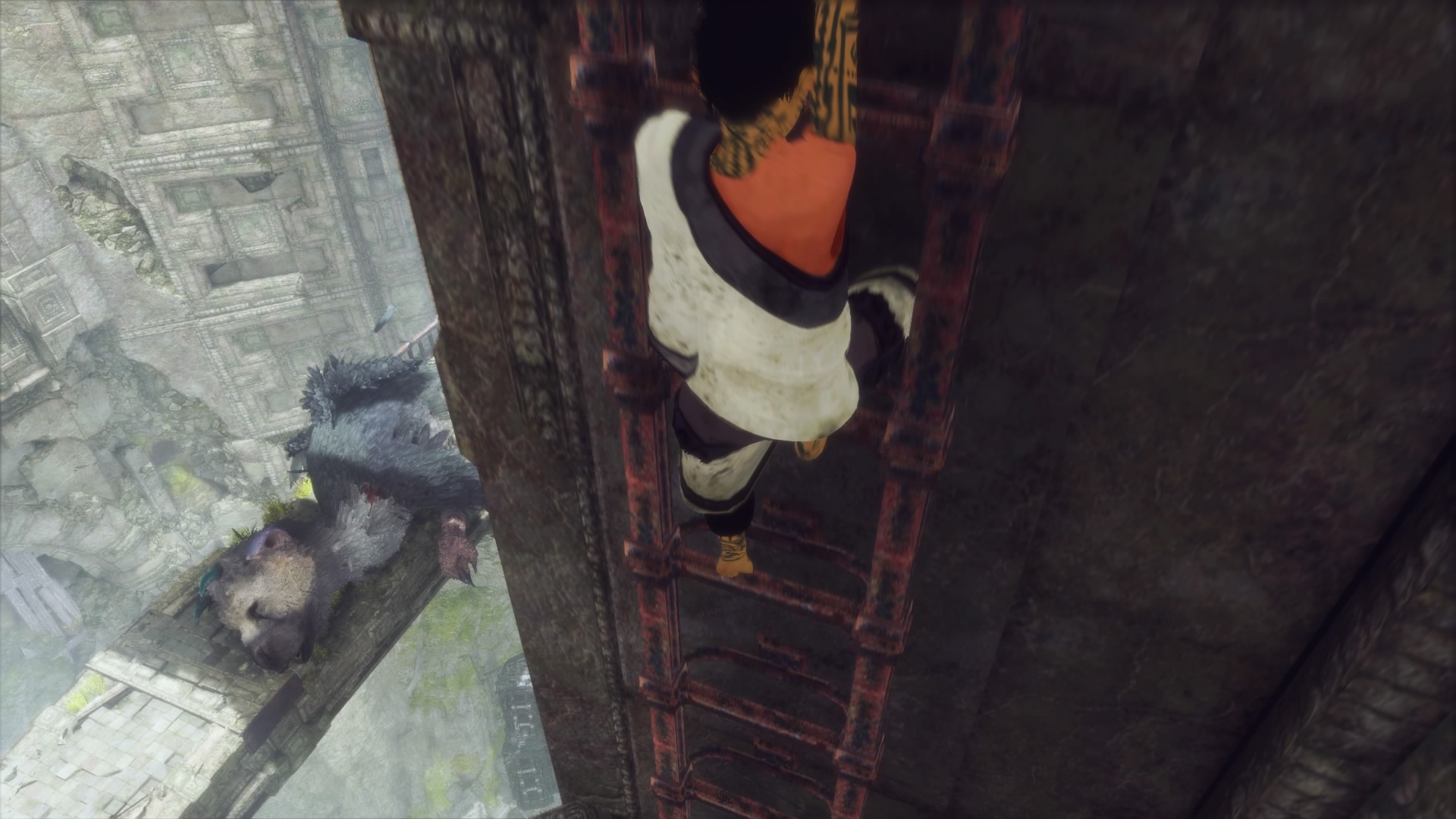 Climb down the two ladders on your left to return to Trico.

When you climb onto Trico and start pulling out spears, he slides off the bridge and falls the rest of the way to the ground. You've been here before. Finish getting rid of the spears before anything else. When you pull out the last spear, Trico will puke up your mirror. Pick it up and wipe it off.

You're going to have to find some food for Trico before you can think about getting out. Climb onto the minecarts on the left side of the room. They'll fall down and knock you out in the process (number six, we think), but, when they do, two Trico Treats will roll free.

The first barrel is on the ground between the carts. The second is on a ledge above them.

To get the other two barrels you need, you need to remember how to use your mirror — Trico's tail lightning seems to be an unconscious reflex. Climb up the chain on the right side of the room and point your mirror at the pile of rubble on the right.

Climb over the remaining rubble to find the two barrels. Carry them over and toss them down to the ground. Slide down the chain to get back to Trico. 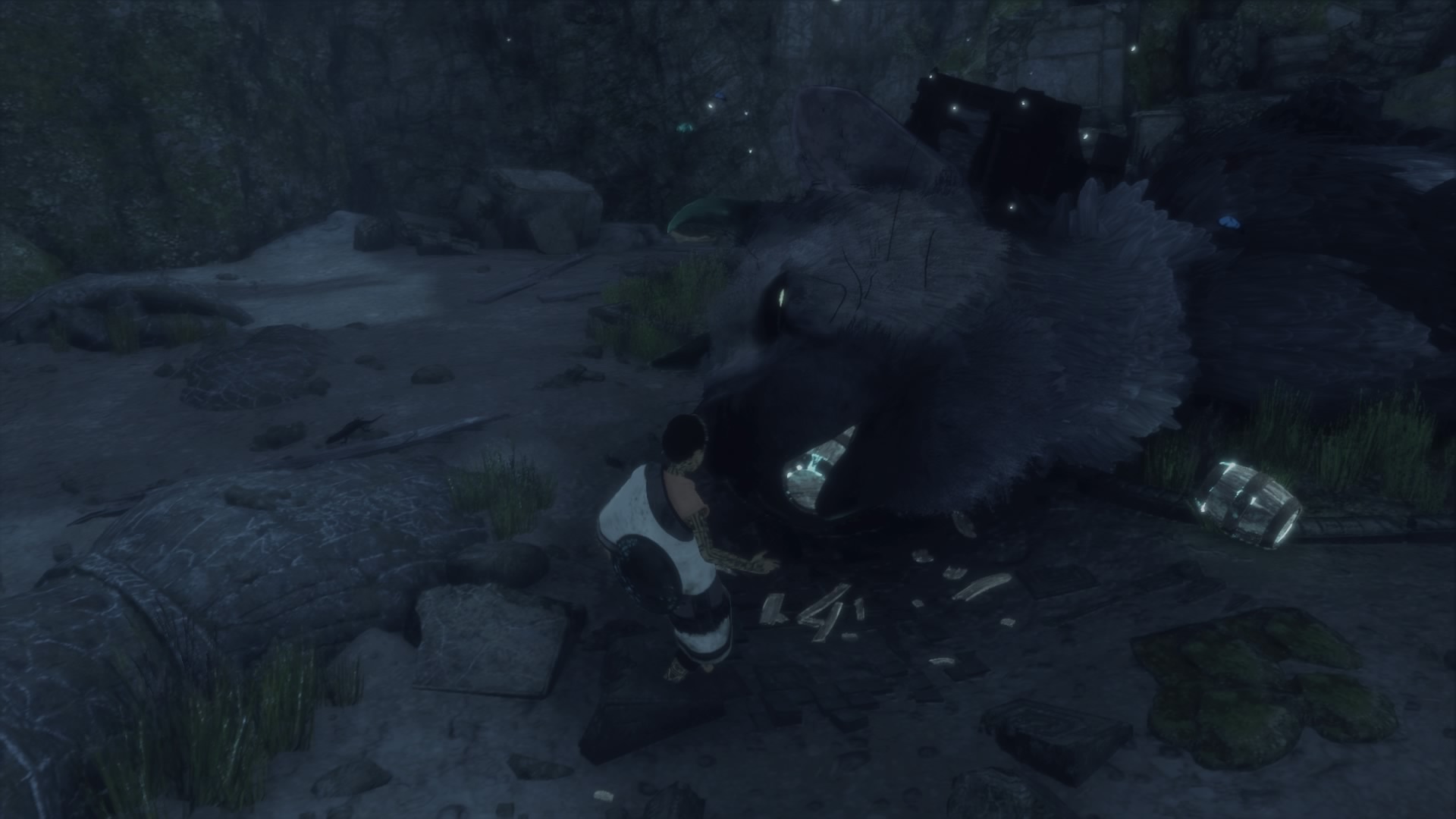 Trico is too beat up to eat on his own, so you're going to have to hold the barrels for him. Once he's fed, lay down and take a nap with him. When you wake up in the morning, he's feeling much better and it's time to get out of here.

Part 17: An army of armor
Full table of contents
Part 19: To the white tower