Turn left in the new area and look for a gate.

You can climb between the bars, and Trico will push it open to follow you. This is a one-way gate, though, so you'll have to find a switch to get him back out.

Explore the courtyard at the end of the hall. There's a crate with three Trico Treats inside. He'll clumsily step on it and smash it, then you can feed him or just watch as he finds them and eats them. 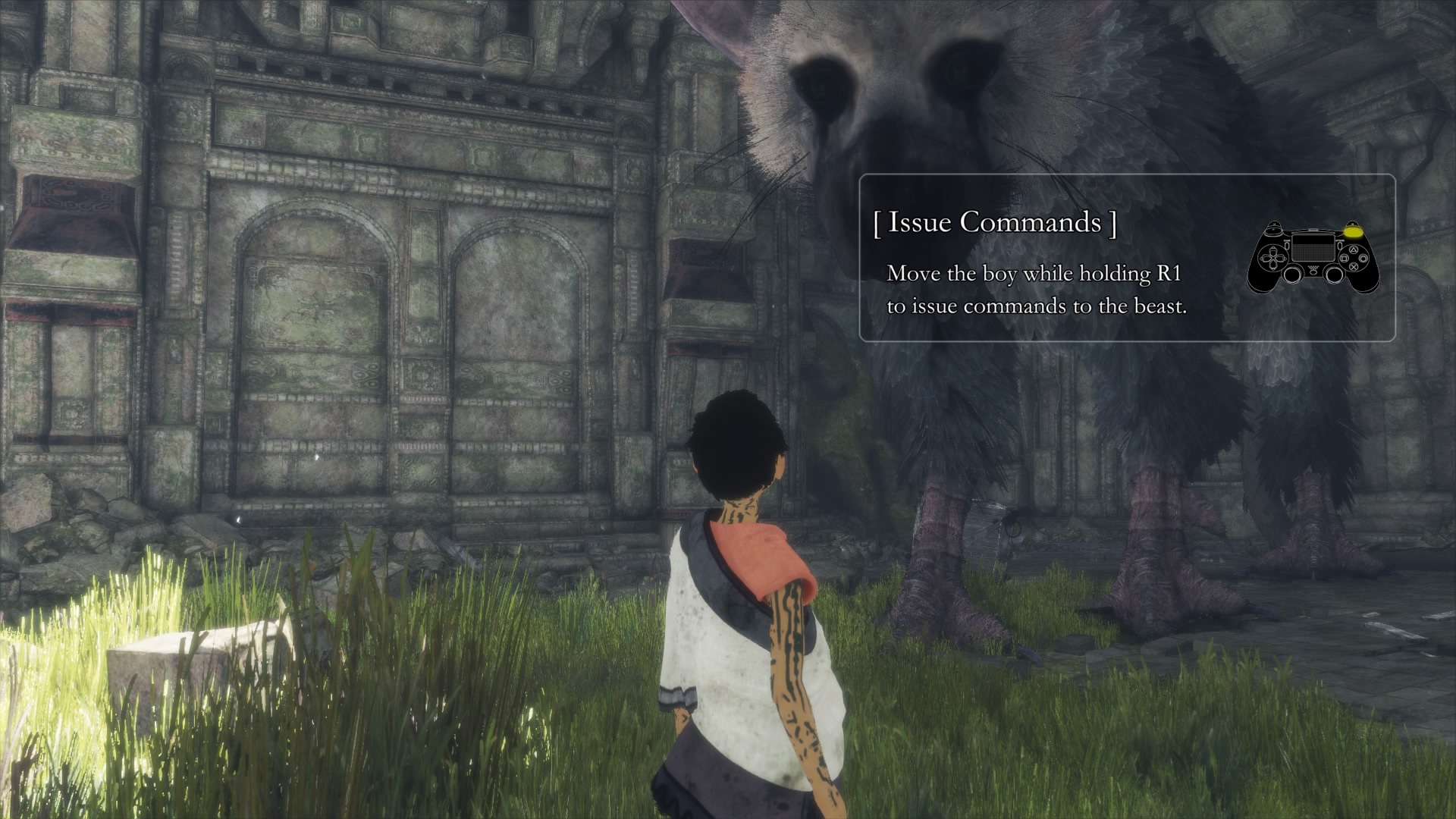 The helpful narrator and some tool tips in the top right will help you learn how to ask Trico to do things. Since Trico kind of does his own thing most of the time, it's helpful to think of these as "suggestions" more than "commands" — he'll probably do it eventually, but don't expect him to do anything the first time you ask.

Practice using your new Command ("Suggest") ability to get Trico to climb onto the pillar in the middle of the courtyard. (Alternately, you can just climb up yourself and he'll follow you.)

Climb to Trico's head and jump onto the balcony. Follow it around and you'll find the switch there to open the gate and let you back out.

Get back to where you started, climb on Trico's back and convince him to jump across the broken bridge. 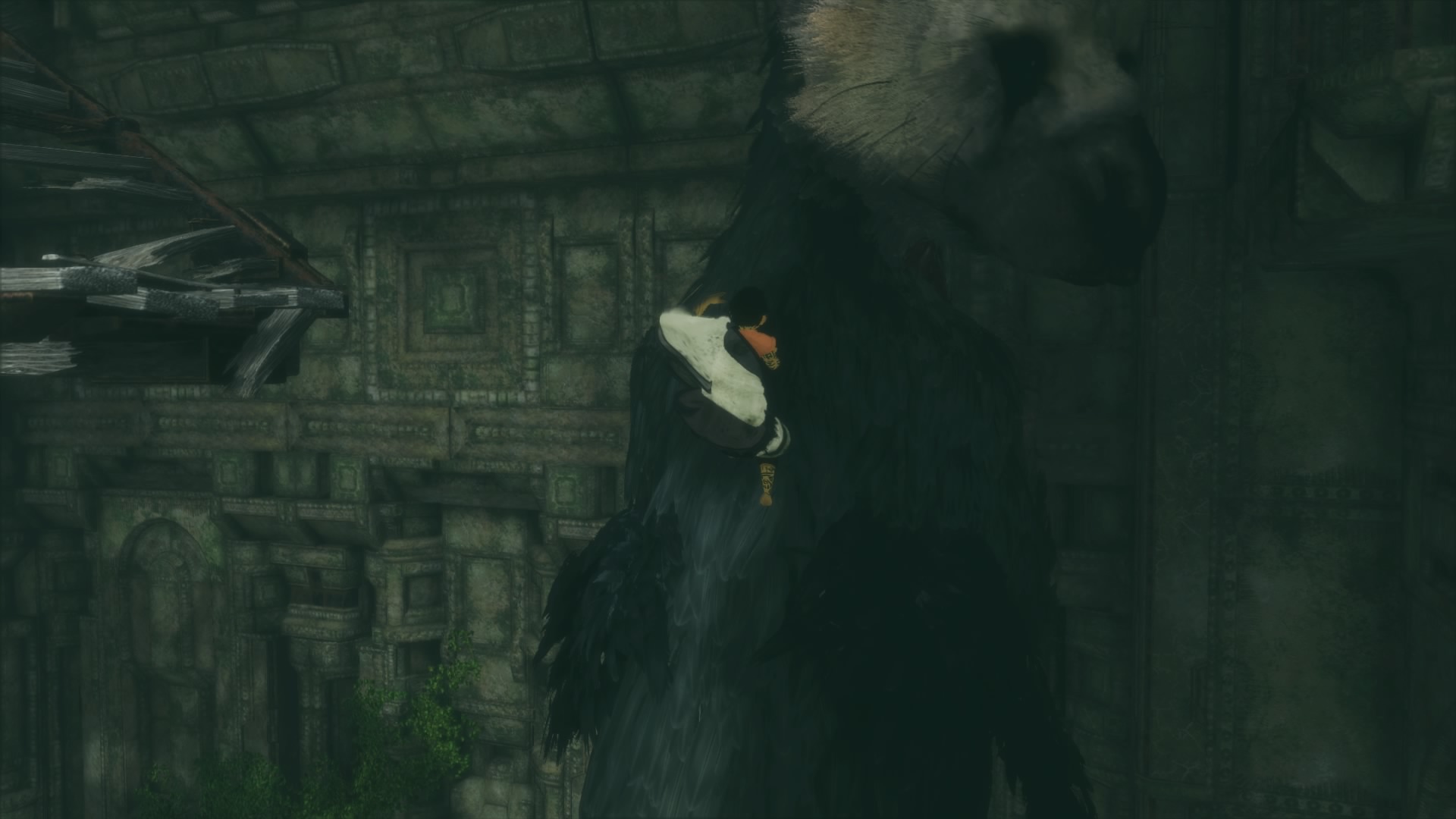 There is a broken wooden staircase to the left of the door. You have to convince Trico to stand against the wall and allow you to climb up him. In our experience, this takes a lot of trial and error and a little frustration. Use your commands to direct Trico to the general area, then command him to jump. We had a little luck keeping the buttons (R1 and triangle) held down, but that might've been coincidence. Be patient and keep trying if it doesn't work at first.

Work your way around to the ladder just to the left of the door. Continue across the front of the building and around the corner. Use the ledges to continue across, then climb through the small tunnel you find.

A quick note before we continue: this next room and the one that follows are basically identical — the second just has more enemies. Your goal is the same in both — avoid being spotted and get the door open for Trico.

There are two ways to go about this. One is not necessarily wrong, per se, but it's definitely not ideal. Falling or missing a jump will lead you down the not-ideal path. We did it wrong first, then managed to do it right in the second room. So, for the full experience, read ahead a little bit and plan accordingly.

The tunnel will lead you onto the rafters above the next room. There are two suits of armor on the bridge below you. Ideally, you'd travel along the rafters to one of the pillars on the side of the room, climb down to the walkway under the surface of the bridge and make your way back to the chain that opens the door. If you'd like to see what that looks like, scroll down a little to the next room. We didn't manage to do that this time. We missed a jump and fell, so we're going to call this a teachable moment instead of a screwup.

Now that you've sprained your ankle and the suits of armor are alerted, you've got to manage both opening the door and avoiding the bad guys at the same time. The best way to do this is to get to the far end of bridge and stand to one side.

Wait for the suits to run toward you and get pretty close. At the last moment, dodge out of the way and run back to the chain on the right side of the door — you're quite a bit faster than the suits are. You're only going to get a few seconds to pull on the chain before the suits catch up — it'll take at least four round trips. If you get grabbed, just mash all the buttons and get yourself set up for another circuit.

This will likely take a long time — like we said, it's not ideal — but it's manageable. Once you get the gate open enough for Trico, let him handle the suits and then climb onto his back. Direct him to the far end of the bridge, and convince him to stand against the wall by asking him to jump.

Climb up the ladder on your right, then crawl through the tunnel you find at the top. You'll come out onto another ledge on the outside of the building. Keep moving along until you see another tunnel like the one you used in the first room. Crawl through to make it to the next set of rafters.

Make your way along the rafters deeper into the room. Your goal is to get out of sight of the suits of armor by the door. Drop from the rafters onto the top of one of the pillars on the side walls, then drop to the bridge.

Walk to the edge of the bridge right in front of one of the pillars, and you'll see a support that you can drop onto. There's a walkway along the edge of the bridge that will keep you out of sight (and tunnels underneath that let you get from side to side). Take this walkway all the way back to the beginning of the bridge. Stand here for a minute and try to get a sense of how the suits' sentry mode work.

Wait for the light from their eyes to pass over you, then dash out to grab the chain. If you timed it right, you should be able to get the door open for Trico just as they stand to attack.

Once again, ask Trico to stand at the far end of the bridge. Jump onto the ledge, and head through the hall on the left. There's a switch and a ladder right on the other side. Pull the switch, then climb down.

Trico won't come all the way through the door because there's another of those stained glass evil eye things. Shove it off into the abyss and climb onto Trico.

Keep asking Trico to jump, and he'll carry you all the way up to the next area.