The Last Guardian walkthrough part 1: Waking Trico and breaking out

Waking up, feeding Trico, finding the mirror, getting past the waterfall, saying goodbye (but not really)

Share All sharing options for: The Last Guardian walkthrough part 1: Waking Trico and breaking out

In a shocking departure for what began as a Team Ico game, you start The Last Guardian as a confused boy in a strange and decrepit stone temple (we love you, Team Ico and its successor, GenDesign, never change). You're trapped here with an adorable, man-eating beast called a trico that you'll creatively name Trico.

Until the game tells us otherwise, we're going to call Trico "him" for now — mostly because Hobbes from Calvin and Hobbes was male, and that's how we're picturing them. 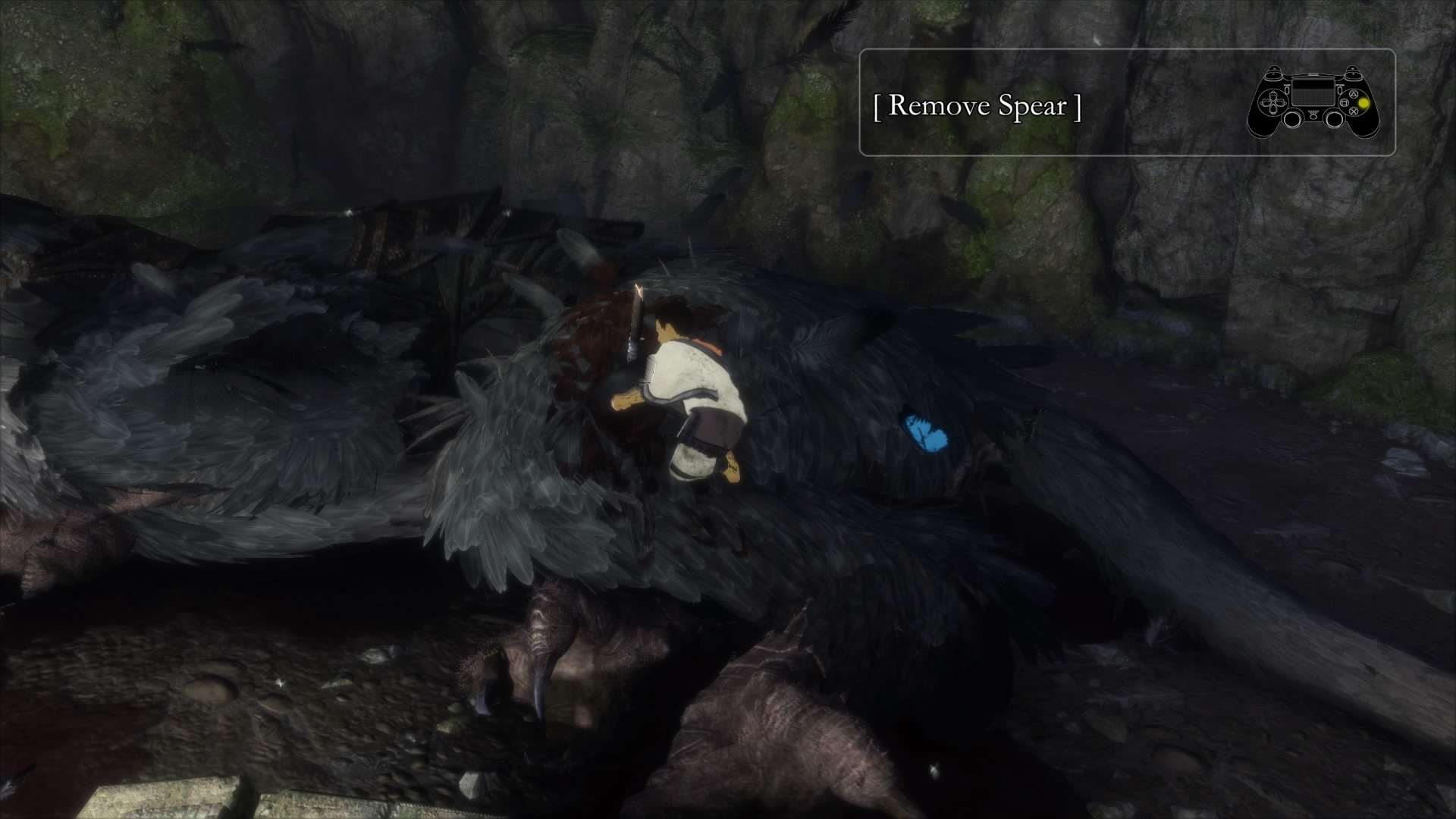 Because you're a kind and trusting boy, your first task is to pull the spear out of Trico's leg. This isn't a puzzle by any means, but it does introduce you to how to interact with objects in this world — hold down the interact button and then move the left thumbstick.

After the spear is removed, it's time to get Trico some food — this will also be a recurring theme. Climb up onto the platforms opposite Trico and bring down the barrels.

He's a shy eater, so you have to drop the barrels and walk away.

The third barrel you need is behind the gate. Pull the lever to retrieve it — using the interact-and-thumbstick move again — then feed it to Trico.

Now you'll notice that Trico has another spear in his right shoulder. Remove it (and get knocked out again). 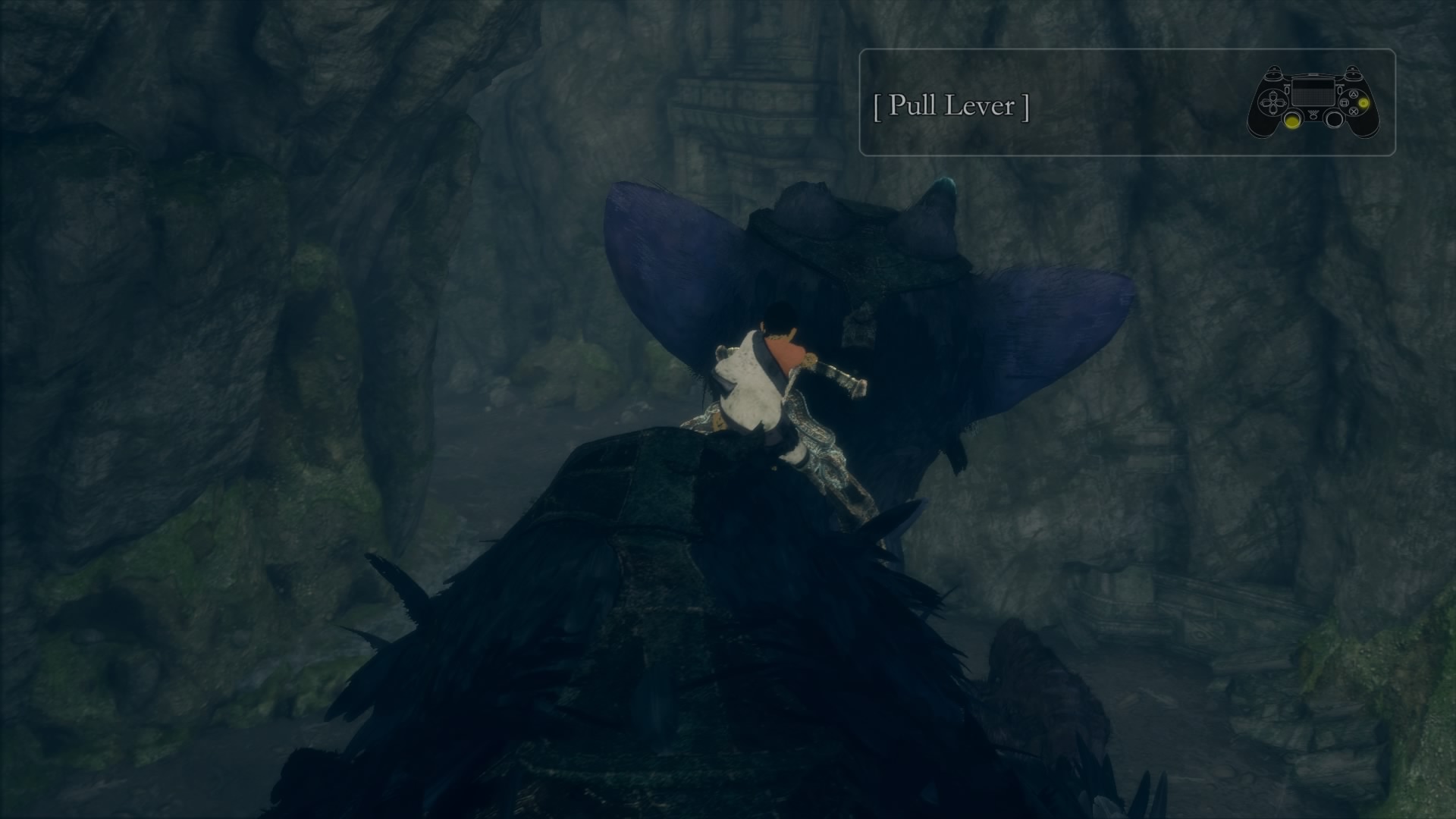 After you wake up (for the third time), you learn to call Trico. Climb up onto his back and pull the lever on his collar to release him.

Now you two can explore a little. Head into the tunnel to the left of where you picked up the barrels. There are a couple more barrels that will catch Trico's attention. Climb up his back to get to the ledge, then pull out the barrel from the hole in the wall. Toss it down for Trico to eat. 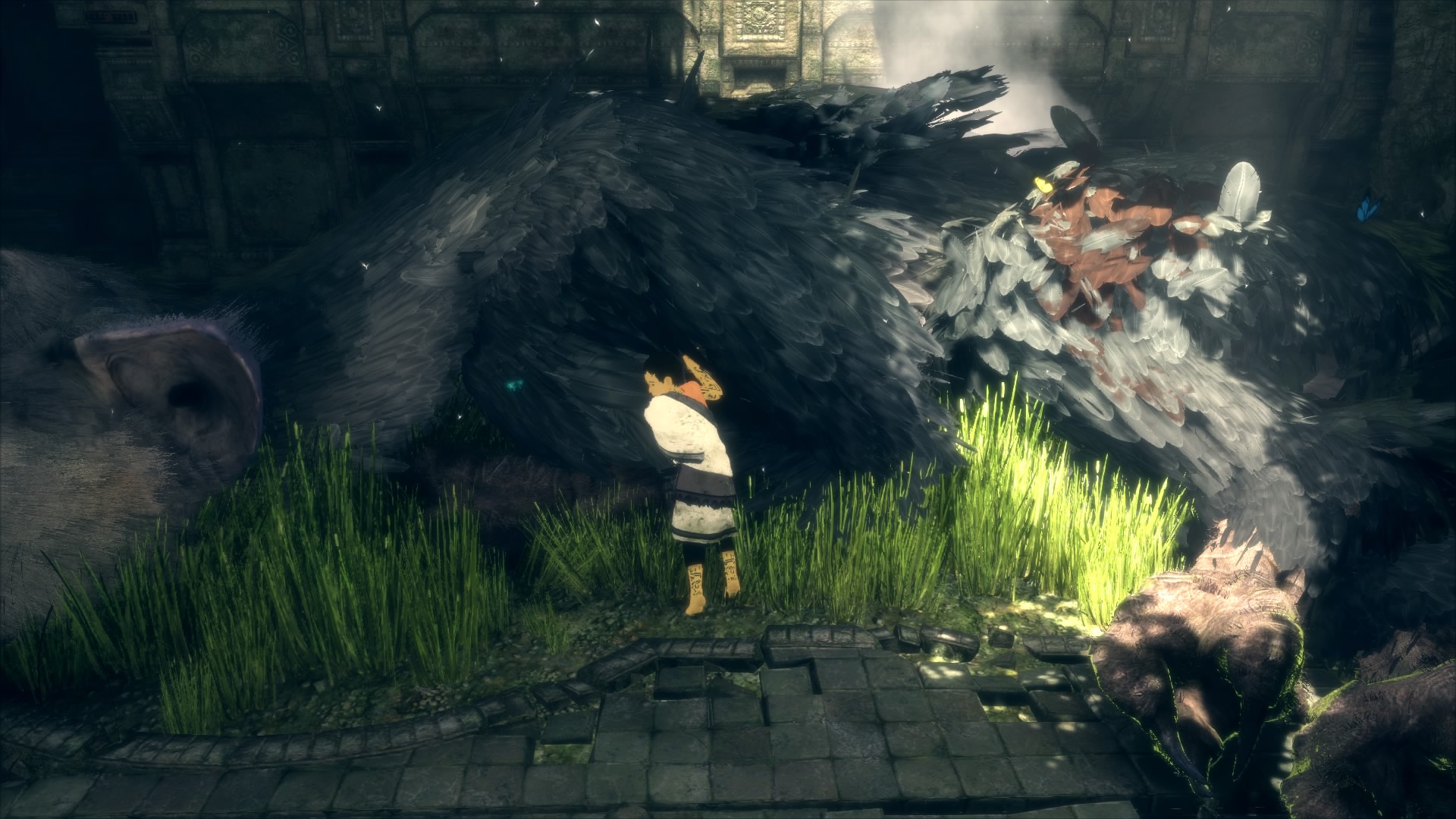 Your next task is to spend several minutes petting Trico. Don't rush this. He's a good trico, Brent.

When you're done, climb up to the ledge again and crawl through the tunnel to look for the source of the white smoke. You'll find a not-creepy-at-all burial chamber.

Go pull the disc out of the sarcophogus' face and learn to use it (you might recognize this mechanic from Shadow of the Colossus). When you're comfortable, head back through the crack in the wall and return to Trico. 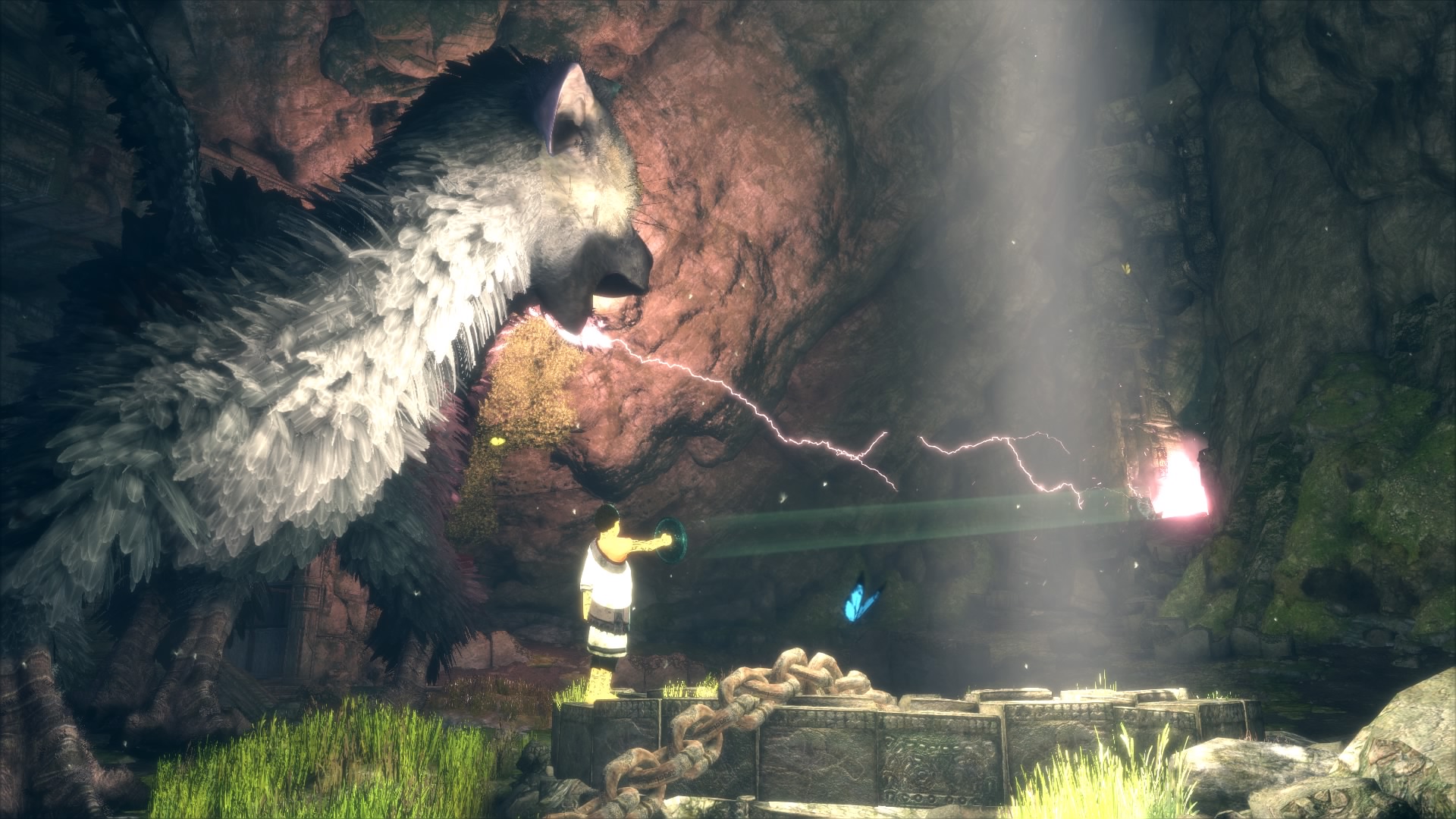 Now you'll learn that you can use the mirror to target a lightning attack from Trico's tail — kind of like laser pointer kitten bowling. Use this on the wall in the main chamber (where you woke up) opposite the tunnel to escape the room.

Follow the ledge along until you come to another room with a pool and a waterfall. Your exit is through a tunnel to the left of the waterfall, but you can't jump high enough and Trico won't come down into the water. You'll have to lure him down. 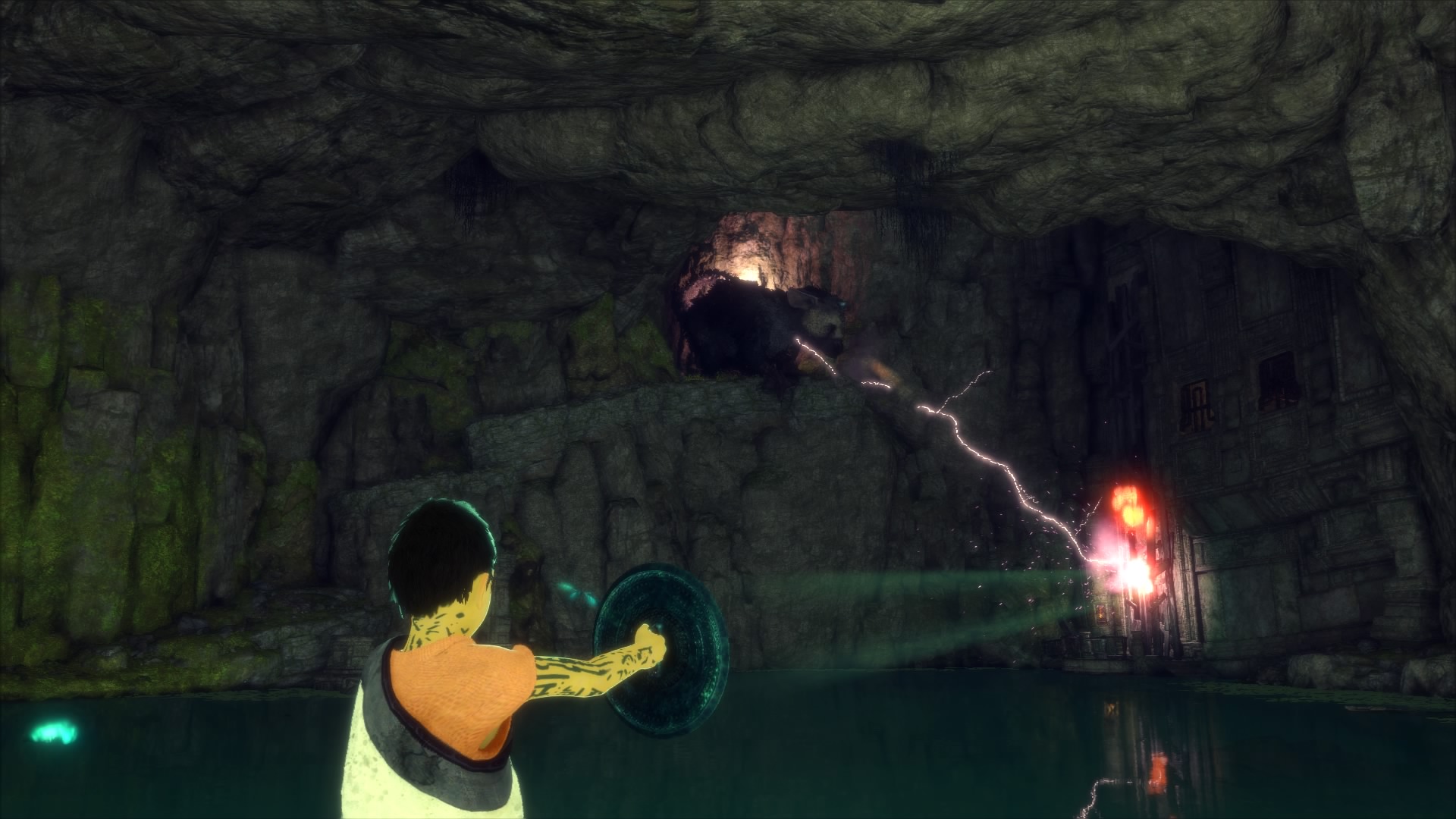 Use Trico's tail-lightning to blast open the wooden wall to the left of the building. It's tricky to get the aim right, so be patient and try different angles if it's not working.

Go inside and climb up the chain. Push down the crate of barrels so that it smashes on the ground below you, then climb back down the chain. Toss all three barrels into the water to lure Trico down. 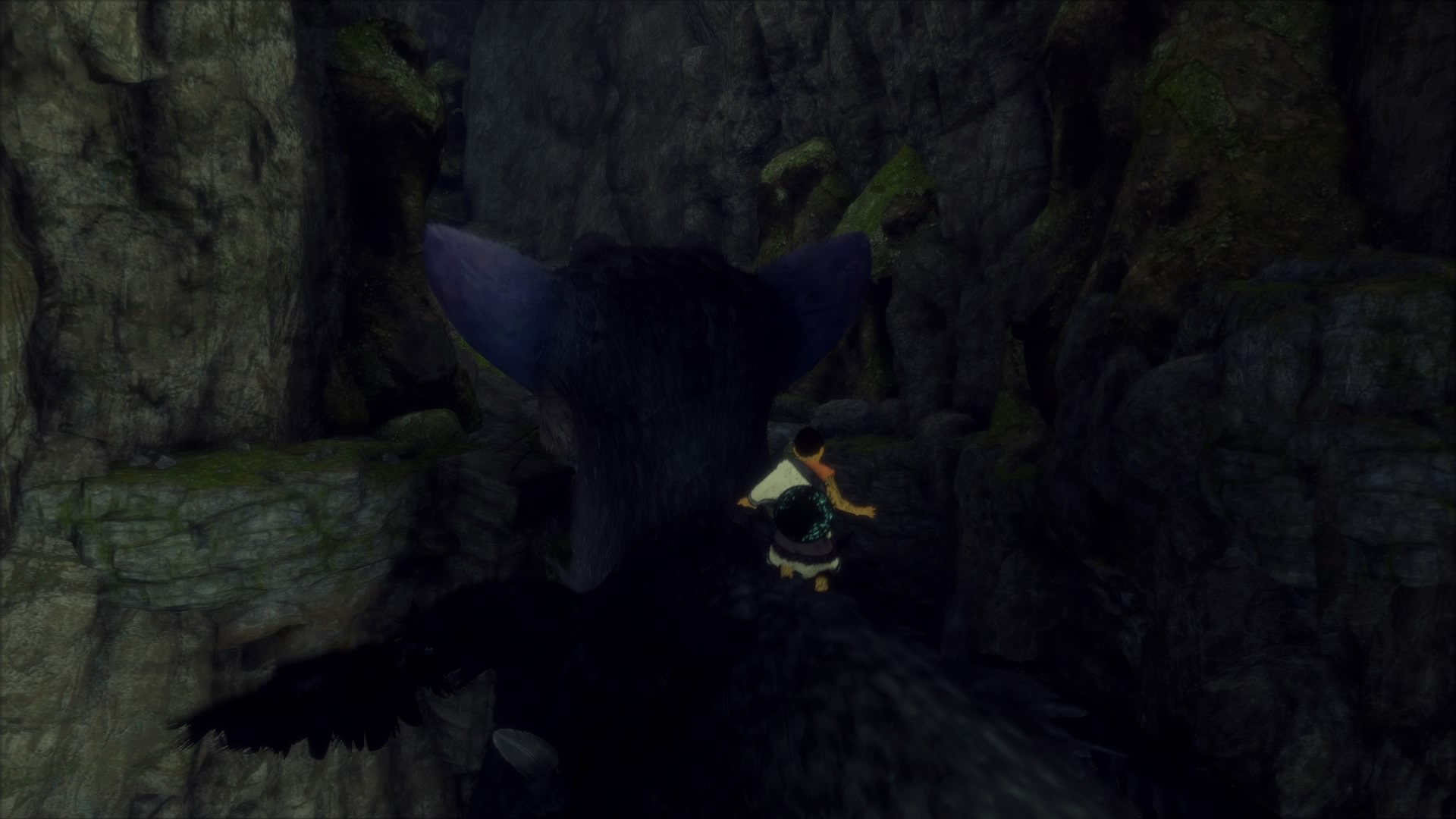 Once he's fed, Trico will head toward the exit tunnel. Climb on his back and ride him as he climbs up. If he gets ahead of you, just call him back.

Your exit is at the end of this tunnel in a final room. Call Trico to you near the wall, then climb onto his head. Jump off of Trico's head to reach the ledge.

Say goodbye to Trico because, sure, that'll work. Follow Trico into the next area, The Nest.