Lots of suits of armor and the drawbridge

Share All sharing options for: The Last Guardian walkthrough part 9: The drawbridge

Since there's no way to open the drawbridge from here and Trico is stuck on his buttress, you have to continue on alone. (Full disclosure: We're only pretty sure this should be called a buttress, but also really wanted to write the word buttress, so buttress.)

Climb down Trico's back and onto the buttress (teehee) he's sitting on, then climb onto the ledges on the wall behind him. Continue along the ledges until Trico looks very sad. You'll find a large hallway shortly thereafter.

Go through into the hallway and follow it to the right. Start climbing the stairs you find.

What follows here is the brute force approach to this area. Your goal is to get past the suit of armor, jump to the center column, throw a switch, then exit through a door that opens at the top of the stairs. Then you'll do the same thing again in the next room.

We did not, however, find the sneaky way around, so the following paragraphs are going to say "run past" and "dodge" a lot. This approach means that you are definitely going to get grabbed by the suits and have to fight your way out. This is doable, but it feels less than ideal. That said, we did not find the sneaky/safe way past any of these suits of armor. If you come up with a better way (maybe by hanging off the edge of the staircase?), let us know in the comments below.

Run up the stairs toward the suit of armor. You have two choices to get to your goal — the pillar in the center of the tower: You can jump from the small landing right where the suit is waiting, or continue up and jump right before the landing at the top of the stairs. (We prefer jumping from the top because it keeps you out of the reach of the suit of armor for longer, but either is possible.)

Jump toward the center and climb into the room in the pillar. Throw the switch inside to open the door at the top of the stairs.

You'll have to jump out of the opposite side of the pillar which will bring you back to the bottom of the stairs. Climb the stairs again, running past both suits of armor — mashing all of the buttons to escape when they inevitably grab you — and out through the door you just opened. 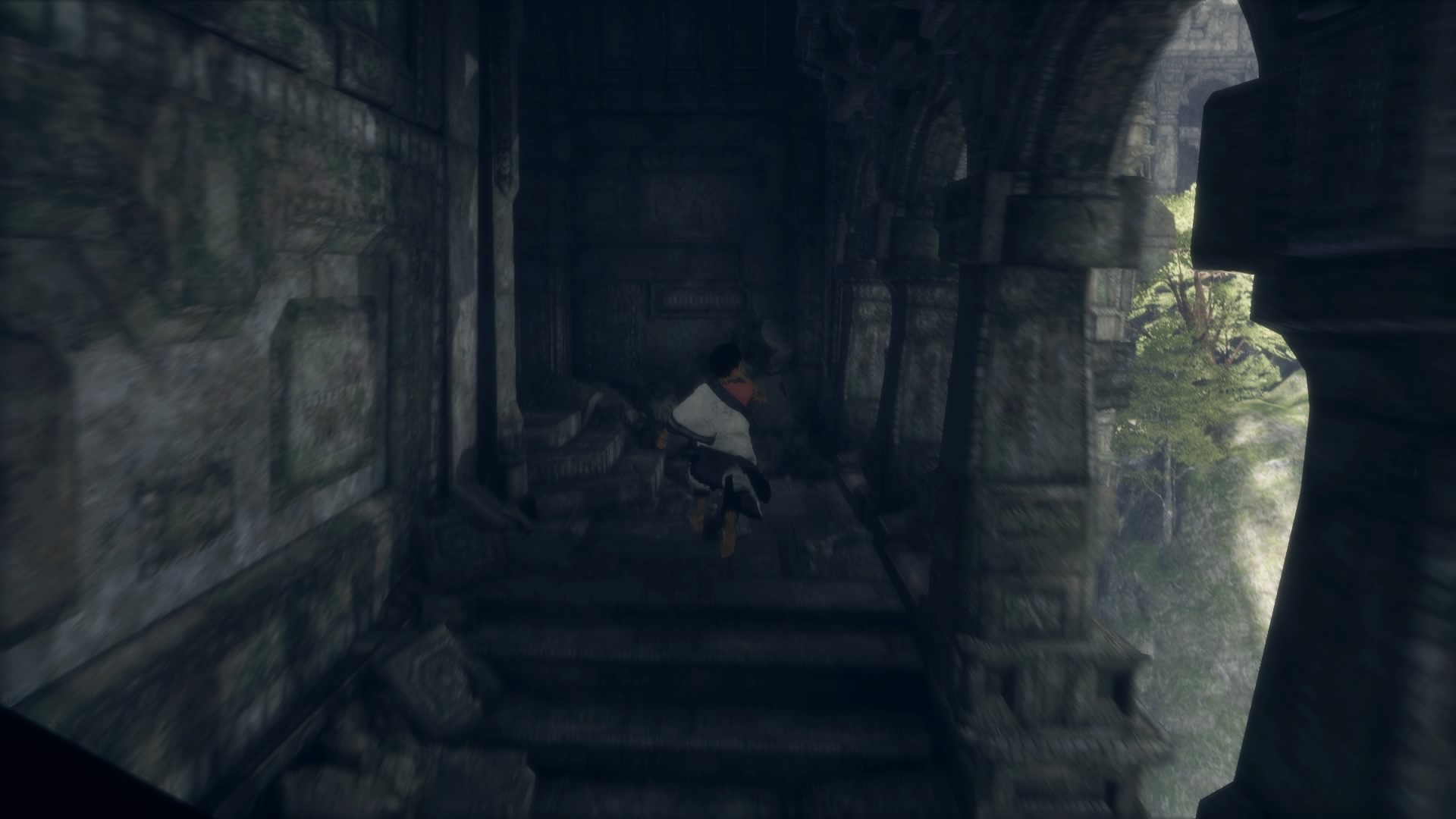 Outside, you'll find a hallway that overlooks where Trico is waiting for you below. Run along it and through the door on the left at the other end.

Repeat the same process in the next tower. Run, dodge, run, jump, throw the switch, run up again and get out.

At the top of this tower, the hallway you find will have two more suits of armor throwing spears at Trico. This is obviously not OK. You might be able to shoulder butt one of them off the ledge, but you're not exactly equipped to take them on directly. We totally understand wanting to fight, though, because how dare they. Climb up the ledge at the end of the hall.

This will lead you out onto some beams that almost span the gap to the drawbridge. Start along the beams. Keep walking slowly as some of the beam will collapse beneath you. Just keep heading out as far as you can. 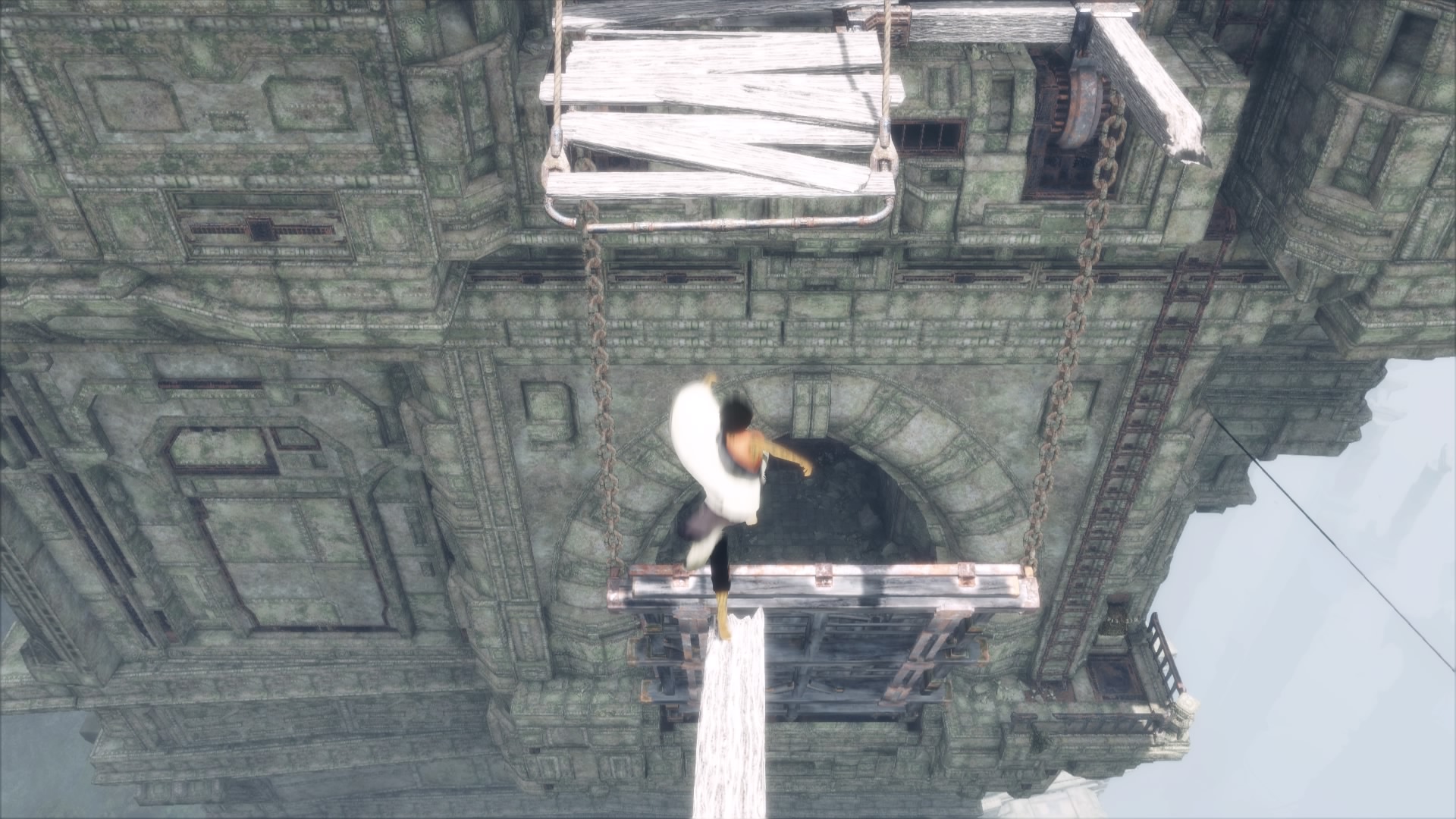 Try to make the jump toward the wooden platform on the other side. You're not going to make it, but you have to try. 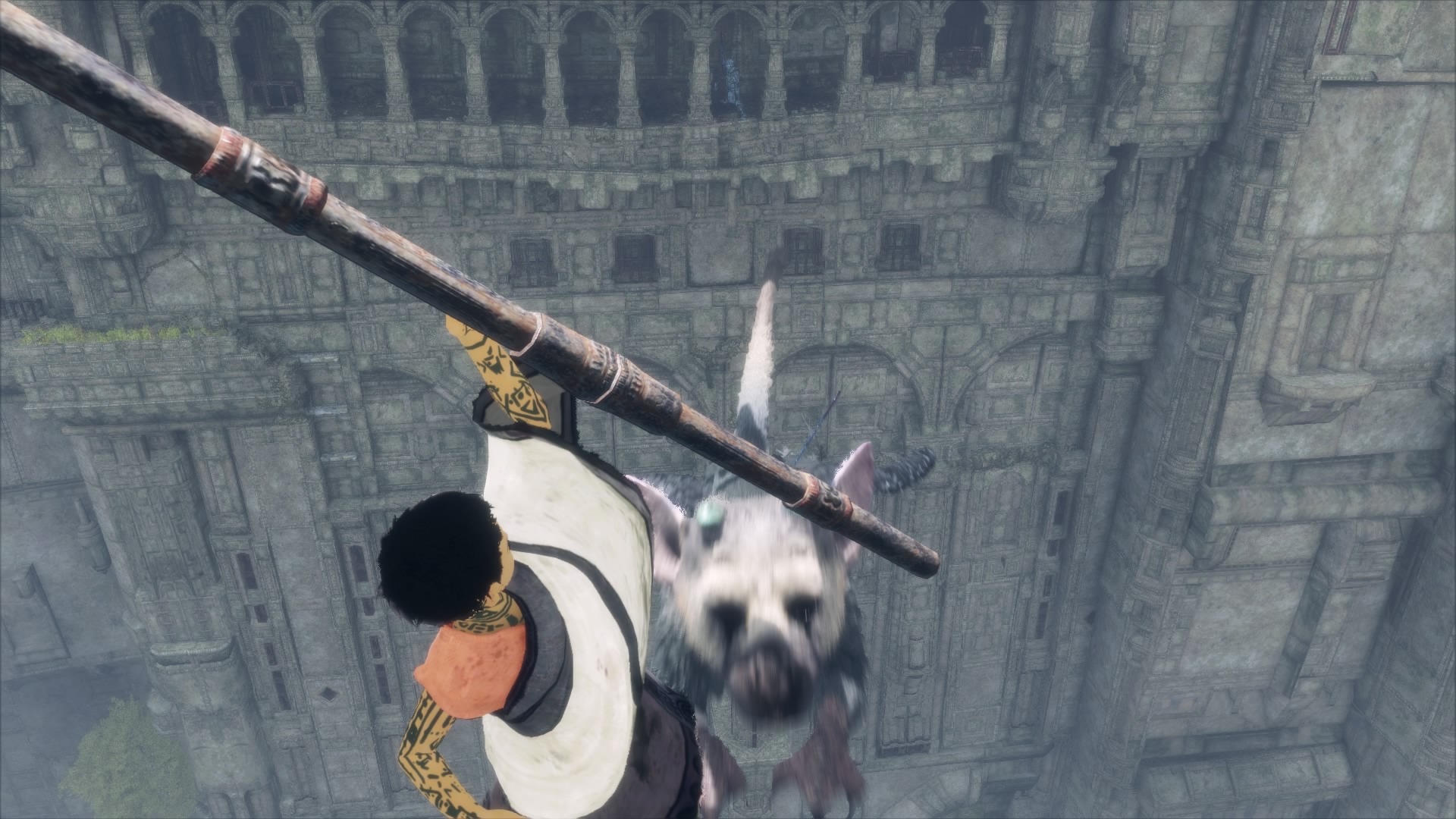 This obviously disturbs Trico, who ignores the suits of armor attacking him and comes to your rescue.

Obviously, the first thing to do is to remove the spears Trico took while you were off on your adventure. Climb up his back and jump/fall inside the almost-open drawbridge.

Follow along to the clearing at the end of the hallways where Trico will lie down because he's super hungry, and he's earned it.