Share All sharing options for: The CW's next Supergirl/Flash crossover will be a multi-episode musical

Supergirl and The Flash will crossover for a second time — with a multi-episode musical, of all things, executive producer Greg Berlanti told press at the Television Critics Association this afternoon.

Crossovers are common between the veteran shows of the "Arrowverse" — that is, Arrow, The Flash and Legends of Tomorrow — and now that newcomer Supergirl has moved from CBS to the CW, there are no longer any corporate hurdles standing between Kara Danvers and the rest of television's DC Universe. It seems as though Berlanti and company are taking full advantage.

He told journalists that the episodes would feature primarily preexisting songs, but that they would try to have at least one original song per episode.

"We'll be careful about how they'll break into song. There will be an element that they'll probably be in a character's head so it's not too disruptive," he added.

As to why a superhero show would be interested in having a musical episode in the first place, Berlanti said it came down to using their actors' talent to its fullest.

"When [Melissa Benoist (Supergirl) and Grant Gustin (the Flash) are] not acting, flying, or punching," on set, Supergirl showrunner Alison Adler said, "they’re singing. They're sitting in their chairs and singing together." 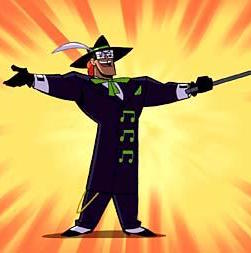 Berlanti said that the folks behind Supergirl and The Flash have "toyed" with who the villain would be, but would not confirm. The obvious choice is the Flash villain Music Meister, a character who committed musically-themed crimes. His most memorable use outside of comics is probably in "Mayhem of the Music Meister!," the musical episode of Batman: The Brave and the Bold, in which he uses mind control to force superheroes to commit crimes while singing and dancing.

In Brave and the Bold, Music Meister was portrayed by Neil Patrick Harris, and this writer, for one, would love to see him reprise the role for a live-action show.

HBO renews The Last of Us for a second season