The guide to building a PC for virtual reality

So how much power do you need for your virtual reality gaming PC?

VR, at least the desktop variety, is an expensive technology, and it requires an impressive system. That remains true whether you're going with the Oculus Rift or the HTC Vive, and it's one of the reasons the low price of the PlayStation 4 combined with the $500 full-bundle cost of the PlayStation VR is so attractive. On the other hand, the PS4 won't be able to compete graphically with PCs built for VR.

But why is the technology so demanding? 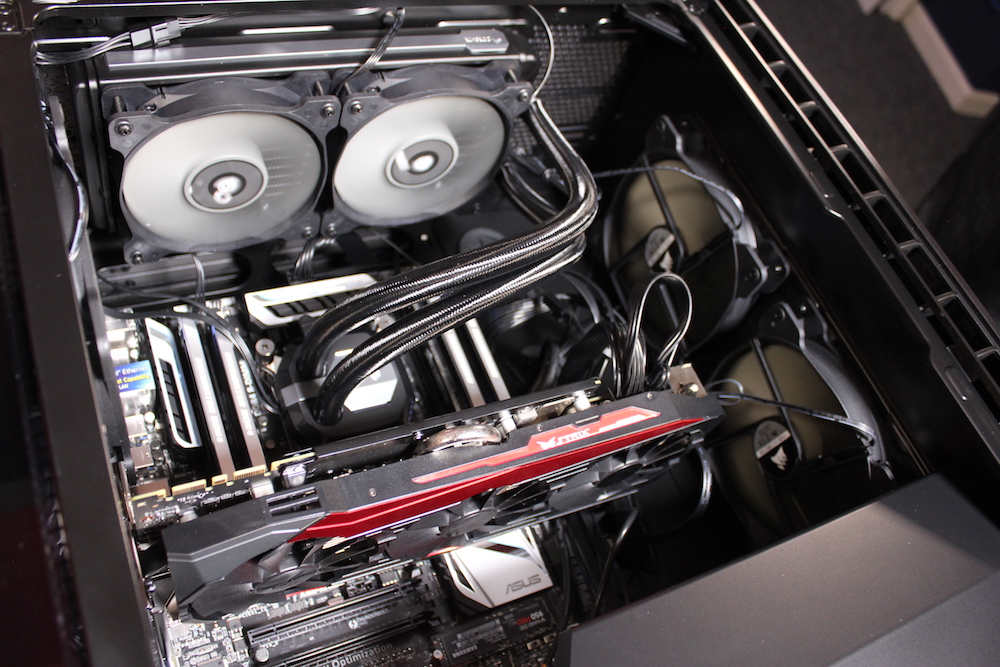 "These VR devices have two HD low persistence displays refreshing 90 times per second. I'm no mathematician, but that's a lot of pixels," he continued.

And frame rate is king when it comes to virtual reality. If it dips below the refresh rate of the screens in the headset, you're going to feel ill. But how little can you get away with, in terms of gaming performance?

We partnered with PC Perspective to build two computers designed for virtual reality gaming. Their expertise in hardware, combined with our knowledge of VR, helped us build a system for around $900 at the time of writing that was designed to get us close to the minimum spec of the Oculus Rift, and hopefully the HTC Vive.

But just building it wasn't enough; we had to test VR with both upcoming systems.

We didn't stop there, but for now, this is what we put together for the entry-level VR system.

Here is our guide for a minimum-spec Oculus-ready gaming PC, along with some thoughts on how well it handles virtual reality.

Here's the build we came up with, using the minimum specs provided by Oculus and with an eye to value and performance:

There are a few thoughts here, as explained in the video. We went with a true quad-core processor due to the demands of gaming in general and VR in particular. Also, there's not going to be a big jump on prices or processor architecture at this price point in the near future. The GPU was an easy pick — we just went with the minimum-spec GTX 970 — but with a model that we knew was solid and would give you a bit more performance with a bit less noise. If you're curious about the rest of the parts, the video above goes into some more detail.

How did it perform in real-world testing? Very well.

Everything in the Rift's launch lineup that we tested ran great, and provided a solid virtual reality experience. We could kill the frame rate in games like Eve Valkyrie by maximizing the settings, but the game recommended that we play with the "medium" graphical settings, which gave us a solid 90 frames per second.

The reality is that this system can do VR, and it doesn't feel like a "minimum" experience. It looked great, and felt comfortable. How the hell are we getting such good performance in such a demanding medium out of a minimum-spec machine?

"Lucky for us, there have been some pretty huge advances in software to help out," Renauld explained. "Game engines are doing things like instanced rendering that checks both displays and is able to reduce the number of things that need to be rendered twice. Lots of cooperation between the major display drivers, game engines and HMD [head-mounted display] manufacturers on the software side allow us to do things that would be impossible if we were just pushing the raw images from the computer to your eyes. So, in the end, you're getting more power than you paid for on the hardware side." 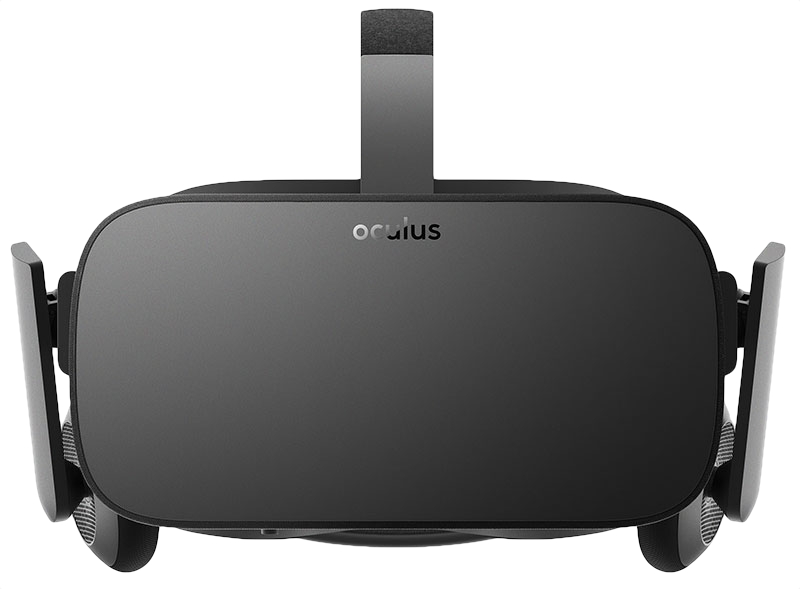 Other developers were just as happy. Adam Orth, founder of studio Three One Zero and the developer of Adrift, noticed during one event that the game was being demoed on non-super-powered PCs.

"I was surprised, pleasantly, that an off-the-shelf PC that wasn't the highest level ran our game beautifully," Orth said. "I was totally psyched about that."

Oculus actually tested Adrift to make sure it ran well on the Rift's minimum spec, Orth told us, and gave Three One Zero feedback on where the team might need to optimize the game.

"'This section of the game isn't really hitting it for us. You need to focus on that,' they would say," Orth told Polygon. "It's not a very strict process ... it's more of a feeling of everyone pitching in and rolling up their sleeves together than a Draconian 'you must have this, this, this in order to even be considered.' It was a very pleasant experience."

Orth stressed that Oculus didn't pay the developer any money for Adrift, but that the company gave Three One Zero guidance on sections that needed to be optimized to run well on minimum-spec systems. If you can't run your game at 90 fps on this spec, you're not going to make it onto the official Oculus Store, it seems.

We didn't stop with Oculus, however. The Steam VR tool, designed for the HTC Vive hardware, also put our minimum-spec system right in the middle of the green section, meaning that it was "good" for virtual reality, and assigned no bottlenecks to the build. In other words, the testing said that we would have a pleasant experience, and it didn't find anything that might hold our hardware back. 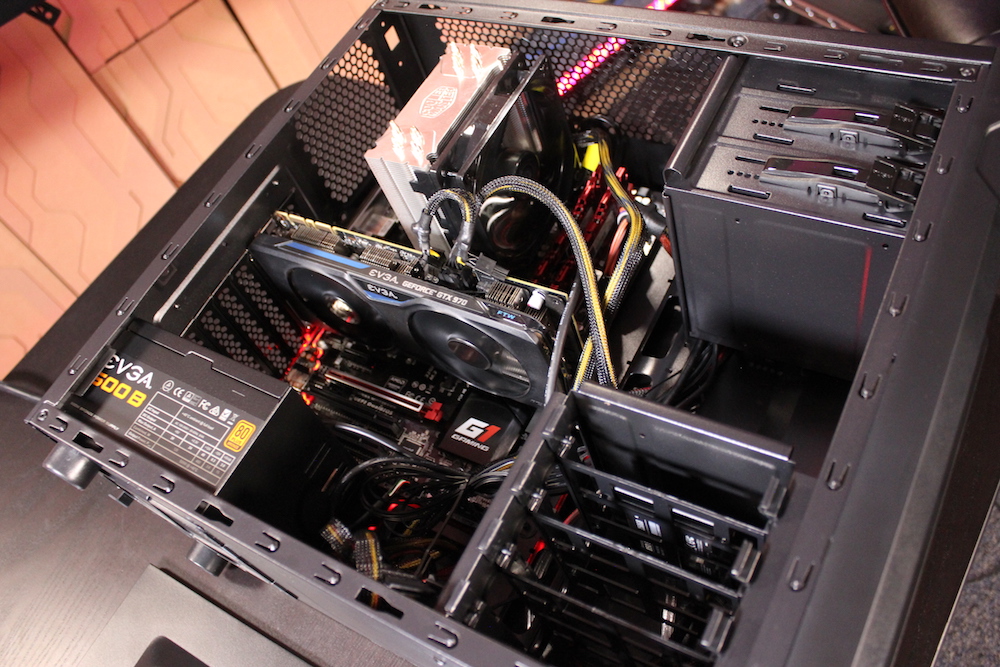 We tested a bunch of HTC Vive games on the $900 build and were, again, very happy with the performance. Yes, you can increase the settings on some games and drop below the minimum 90 frames per second, but if you keep graphical settings with an eye toward performance, you're going to have a workable Steam VR system with our build.

So here's what we were able to achieve by targeting the minimum specs listed for the Oculus Rift: A system that would run both VR headsets very well, although you'll also feel the limit of the components if you decide to get aggressive with the settings of some of the games. But on the recommended settings, or in games that don't offer you any options, you're going to have a great time.

That's what I want to stress about this PC build: You can push some games past their limits, but overall, this is enough power to give you a very enjoyable time in VR. We were pleasantly surprised by the result.

So what if you want something more? That's why we put together the next thing, a $2,500 gaming PC. Take a look at what we put together, and our results from testing.

This is where choices get more interesting. We went with a Haswell-E chip, and I'll let PC Perspective explain why:

Our $2,500 build moves to the Haswell-E platform, an enthusiast design that comes from the realm of workstation products. The Core i7-5930K is a 6-core processor with HyperThreading, allowing for 12 addressable threads. Though we are targeting this machine for VR gaming, the move to this processor will mean better performance for other tasks as well including video encoding, photo editing and more. It's unlocked too — so if you want to stretch that clock speed up via overclocking, you have the flexibility for that.

It's a six-core processor with 12 threads. That change in platform means we had to go with a more expensive motherboard, but that gives us more options in the future when it comes to expanding the build. It also uses quad-channel memory, which means you need to use four memory modules to get the most performance. The memory is, of course, faster. We also went with one of the fastest single-GPU cards on the market.

This system is meant to be a beast, but a beast within reason.

So it turns out $2,500 gets you a whole lot of hardware these days. Now let's take a look at how the two systems compare, with some benchmarks:

The 3DMark benchmarks here are the industry standard. We're just interested in getting some comparison between the two systems. In terms of pure performance, of course the more expensive system is going to trounce the entry-level PC designed to hit the minimum spec for VR.

Same thing — you begin to see a pretty nice jump here in terms of overall performance. Both systems got all green checks from the Oculus application, but that just gives you a straight thumbs-up or -down vote. The Steam VR scores are a bit more interesting.

A score of 7.10 puts you right in the middle of the green, or "good" section of the Steam VR application, while 11 is the highest rating you can achieve. This tells us that both systems will be more than powerful enough for the HTC Vive, which is good news!

But let's actually test the system with some VR. How does it hold up? And how dorky do you look during this process?

Oh yeah, maxing out the graphical settings in VR feels pretty damn great, even if you look pretty damn silly.

It's also a bit overkill, at least for VR. While you're paying much more for these parts, the graphical rewards for most VR games diminish pretty rapidly. What you're paying for is the act of future-proofing your system, of knowing that games that are released a year from now with more aggressive higher ends to their settings will still run well on your rig.

But do you want that?

"I think honestly, if you're interested in VR, you're probably going to be building a new PC next year too," Orth said. "The processor power is going to increase, but the price is going to go down. It's kind of a weird time. If you build a mega-PC right now, I'm sure it's going to support what VR will be next year, but you'll probably be able to build that mega-PC next year for less money, or for more performance."

Orth also pointed out that many developers were playing it conservative in terms of what they were offering graphically, to make sure games run well on the lower end of the enthusiast spectrum. There are higher graphical options available in the Oculus Rift version of Adrift, for instance. Three One Zero just hasn't turned them on yet, though it may do so in the future.

So as more games come out, it's possible that you'll need a rig as powerful as our $2,500 beast, but the sweet spot may lie a bit in the middle. If you're interested in that, PC Perspective actually did a $1,500 build as well, but for this feature we wanted to see how little we could get away with in the minimum spec and then push it with a higher-end build.

What's fascinating about our results is that, although VR is an expensive hobby and we're in the early days, you can get a great, fun experience out of a system that comes in at under $1,000. Anything above that, for now, almost feels like overdoing it, especially when performance is bound to go up and cost is bound to come down. If you want to spend money on a system for VR gaming today, you may be able to get away with something a bit more conservative than you may have previously thought.

When the floor is 90 frames per second, and that's the target for most games at launch and in the near future, it may be a bit silly to worry about the sky. At least for now.

We'd like to thank PC Perspective for their expertise and help in the creation of these videos and the builds of these PCs.