As of this writing, there are no Story Encounters in the game's alpha state. Also, The Prologue starts the game but never changes, and you can skip it after your first playthrough.

Also, keep in mind that We Happy Few has procedurally generated environments, so no two playthroughs will ever be the exact same. As such, Encounters occur in random and different locations every time. Some Encounters and interactions may not even generate. Even though locations can change, commonalities exist, and we'll tell you what to look for when you need to locate an Encounter. 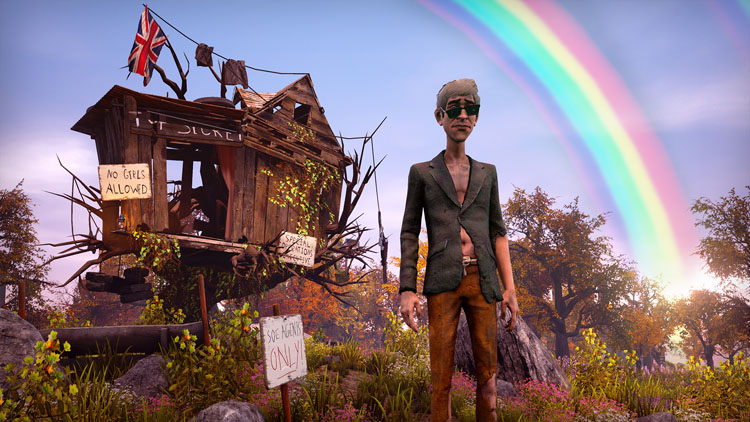 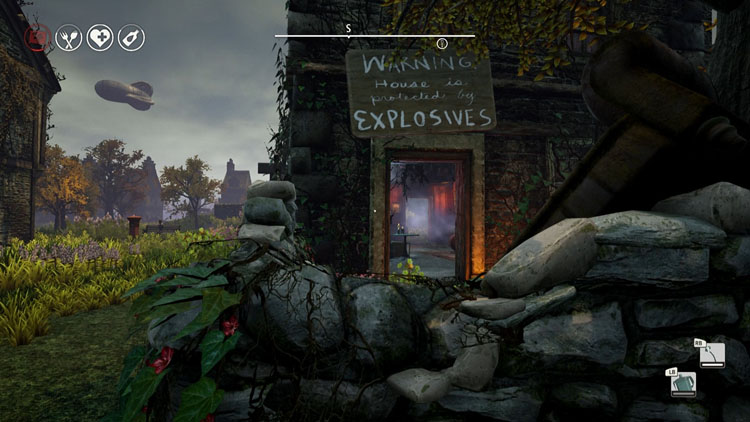 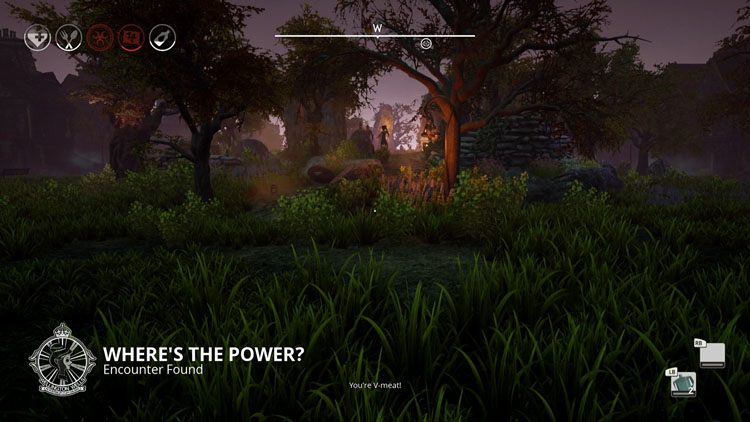 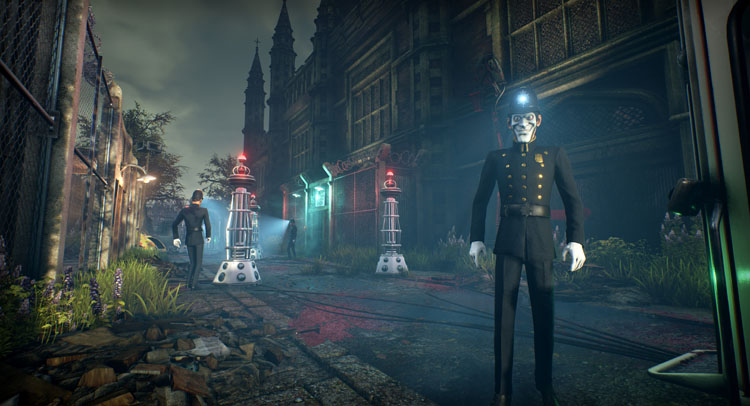 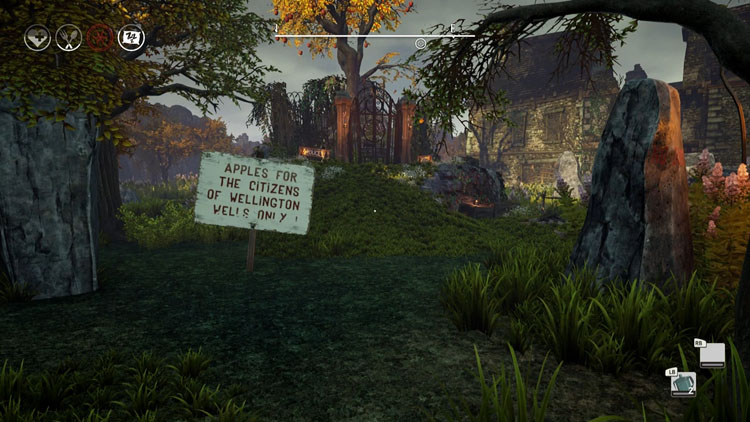 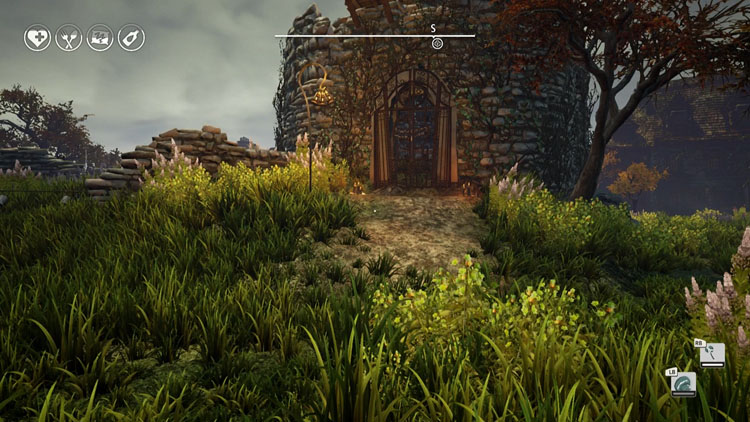 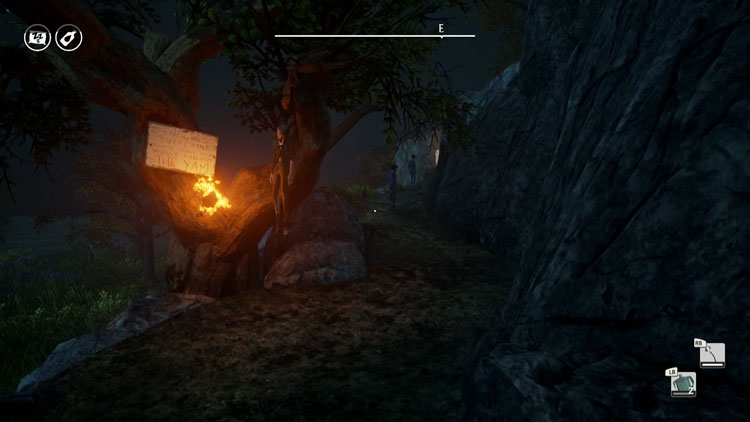 The Altar of Yam 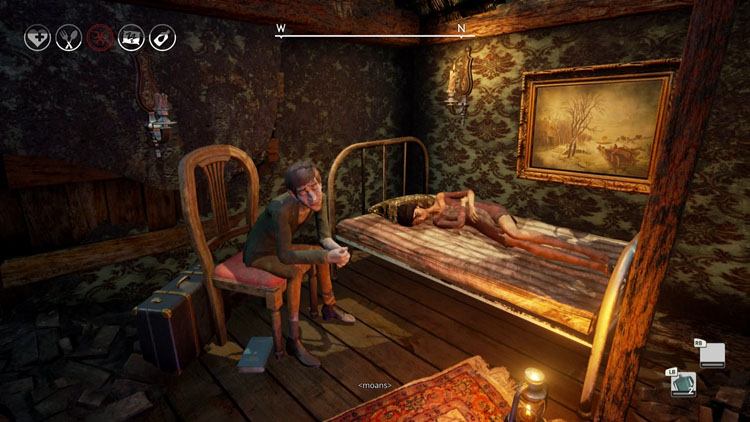 It's a Terrible Life 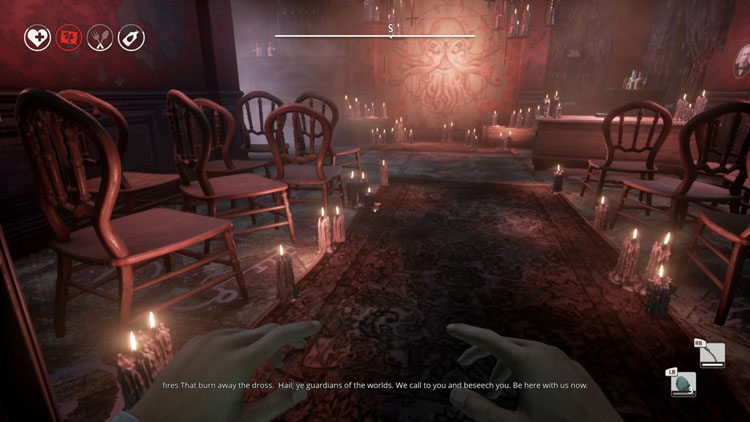 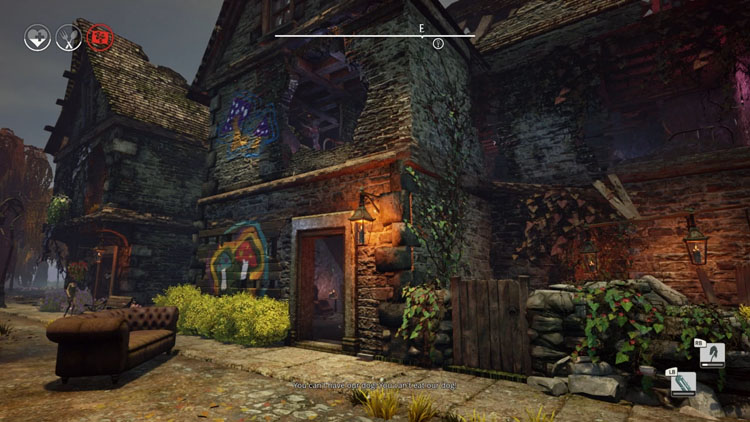 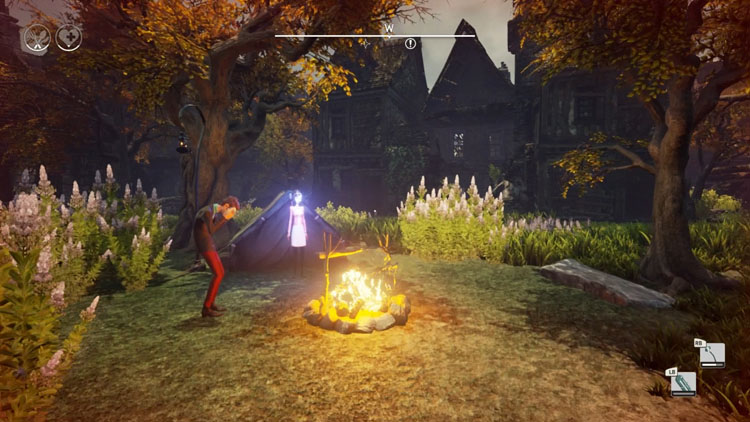 Look for a house with a sign above it that warns that it's protected by explosives. 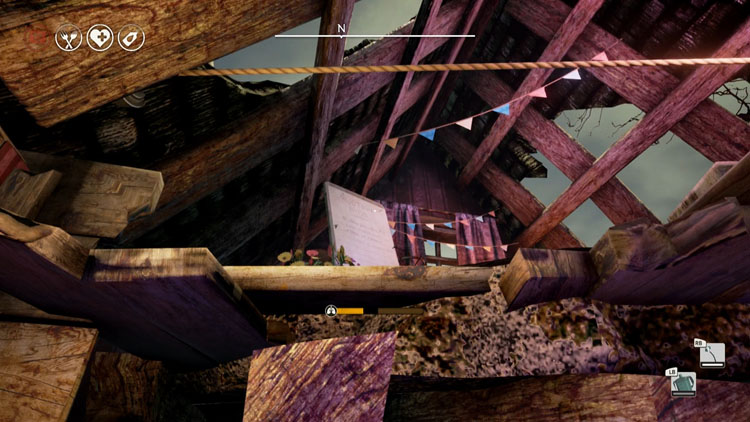 Head into the house and make your way upstairs. There will be a table in an alcove protected by a booby trap. You can trigger the booby trap without taking too much damage. Collect a bag of sugar to complete the Encounter.

To find this Encounter, look for several men standing in the middle of some large stones in a square area on the map. 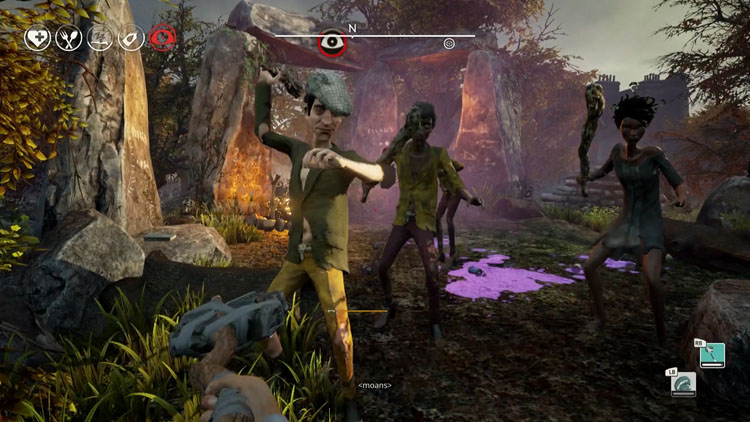 Defeat three Wastrels to rescue Ralph. Weapons are useful if you're able to find one, but they quickly degrade with use. Your fists are your best weapon in the beginning of the game. Blocking and shoving are also useful, particularly in this situation when there are multiple enemies.

Give him a Neximide pill when you've saved him, and he will show his appreciation by vomiting some Motilene into a power cell container. You now have charged power cell.

Encounters are the quests in We Happy Few. Secondary Encounters can reward you with blueprints and other useful items.

Look for the large apple tree surrounded by a fence and signs. This can be quite a risky Encounter, as bobbies police the tree. If you come back at night, you may see the bobbies distracted around a campfire. Take this opportunity to sneak toward the gate and unlock it to complete the Encounter and gain access to apples. 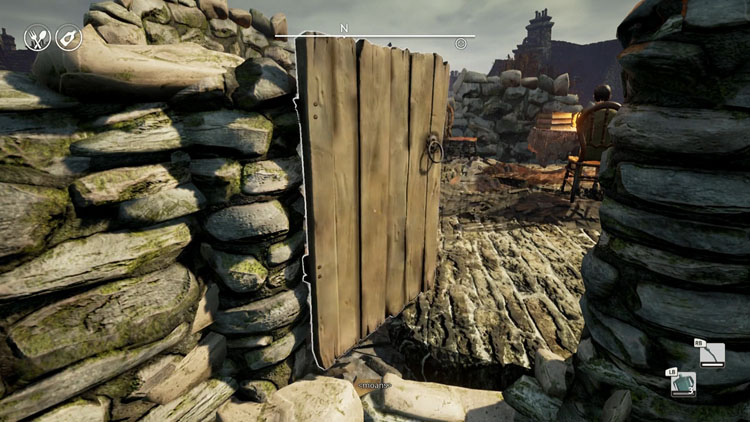 Look for what appears to be the remains of a tower in a square location on the map.

Walk toward the rear of the tower where you'll encounter several tin can alarms. They require a clever trap tool to disarm. (If you need a trap tool, read our guide to our Downer Investigation walkthrough in Hamlyn Village.) Defeat the Wastrels at the top of the tower and then rescue the chef locked away inside.

The Altar of Yam

This secondary Encounter is only activated during the night. Look for the mountain like structure that occupies a large spot that's not squared in on the map. 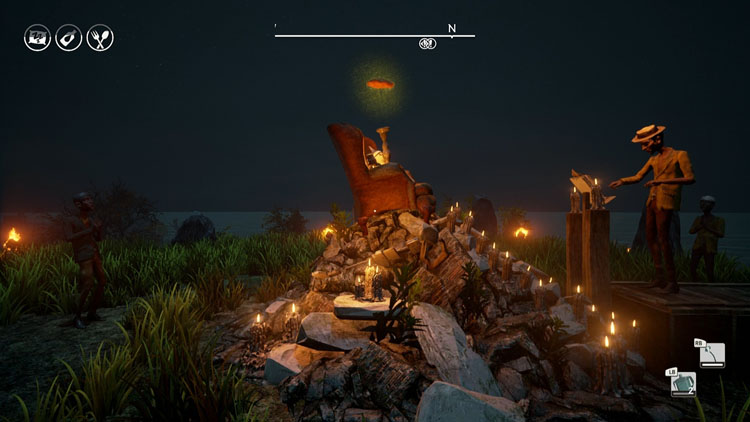 Follow the light torches to the top and observe the Mass of the Sacred Yam. Let it run its course, and then collect a formula for Phytosteroid and the Sacred Yam itself.

It's a Terrible Life

Head into one of the illuminated houses to find a couple upstairs that is in need of your assistance to cross a guarded bridge. They need two Proper Suits, which you can craft from two Torn Suits plus a few other items. You can find the Torn Suits in the suitcase behind the husband.

This is the house that you must find as a part of Johnny Bolton, Special Agent. Look for the house in a large spot that's not squared in on the map. There will be a rock with a moon and pill near the gate. Pop a Joy pill at night to activate this Encounter. Enter the house and sneak around the house. The Encounter is complete when you come across a room upstairs that looks like a place of worship.

Look for the house with colorful mushrooms painted on it. There might also be some Wastrels throwing furniture out onto the streets from the house. Given their intoxicated state, the Wastrels may turn hostile as you make your way through the building.

Head upstairs to steal the Phytosteroid Recipe to complete the encounter and unlock the ability to craft a hallucinogen.

Look for a campsite on a square area of the map with a tent and two individuals. Speak to Gerald, who will have the familiar mask of a Hamlyn resident on, to trigger this secondary encounter. He's been recently booted from Hamlyn and requires your assistance to fend off bandits that come in the night. 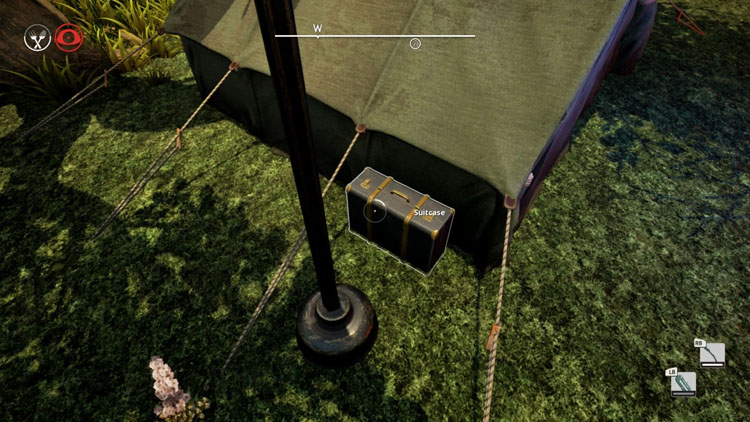 Return to the campsite at night to help defeat the bandits. If you succeed, Gerald will provide you with the combination for a trunk by the tent. If you fail, you will have to use a jimmy bar to open the trunk. Failing to save the two from bandits will not fail the overall encounter. Open the trunk to receive the answer to the question in Lud's Bridge and a Proper Suit to help you enter Hamlyn Village.