Visual Concepts' franchise continues to run unopposed, and it remains one of the best sports games available, both on and off the court

NBA 2K13 doesn't play it safe. Considering the NBA 2K franchise's three-year lack of competition, developer Visual Concepts could get away with sticking to the basics. But year in, year out, the studio continues to execute on its vision of a relentlessly modern basketball simulation with a presentation that's unparalleled across the sports genre.

This year, Visual Concepts brought in rapper and entertainment mogul Jay-Z as "executive producer." You may be skeptical of the value of that position — I certainly was — but its impact is felt from the moment you boot up NBA 2K13.

Jay-Z's touch aids Visual Concepts' efforts to put together a full-on NBA experience, something that's more than just an accurate simulation of basketball. Of course, that's there too, along with a few nods toward accessibility. But NBA 2K13 uses Jay-Z's music background to infuse a hip-hop soul into presentation, an element of sports games that tends to be unremarkable at best. 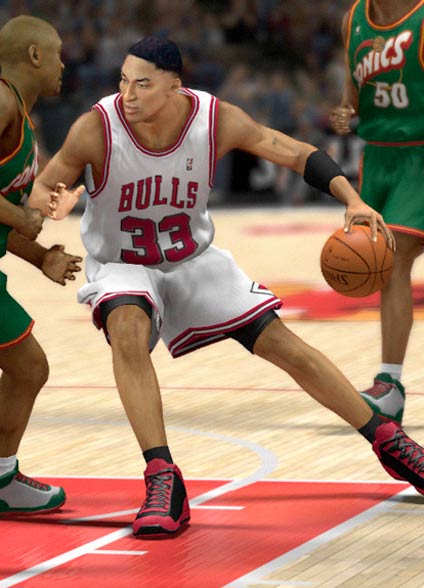 The get-hype opening movie, cut with a performance of Jay-Z's "Public Service Announcement"; the matchup-specific pre-game vignettes, in striking grayscale; the post-game highlight reel for the player-of-the-game award — these video packages, combined with a soundtrack assembled by the rapper, add flair to the typically staid broadcast presentation.

And as far as that goes, NBA 2K continues to feature the best commentary in sports games. NBA 2K13's commentators discuss ongoing storylines in the franchise mode and offer specific anecdotes about teams and players — including your own created character from the MyCareer mode. Hearing them talk up the brand-new Barclays Center made me consider switching my fandom from Knicks to Nets. Their natural flow convincingly evokes a real NBA telecast.

Presentation only serves to highlight the game itself. Visual Concepts made a risky change to allow less experienced players to pull off cool-looking shots and dribble moves. In NBA 2K13, the left stick governs movement while the right stick controls dribble moves, with the left trigger modifying the right stick for shots. The control revisions intuitively break down three of the main things basketball players do. As an NBA 2K novice, I enjoyed the ability to flick and twirl the right stick in various directions to produce dribble moves like a crossover or spin. 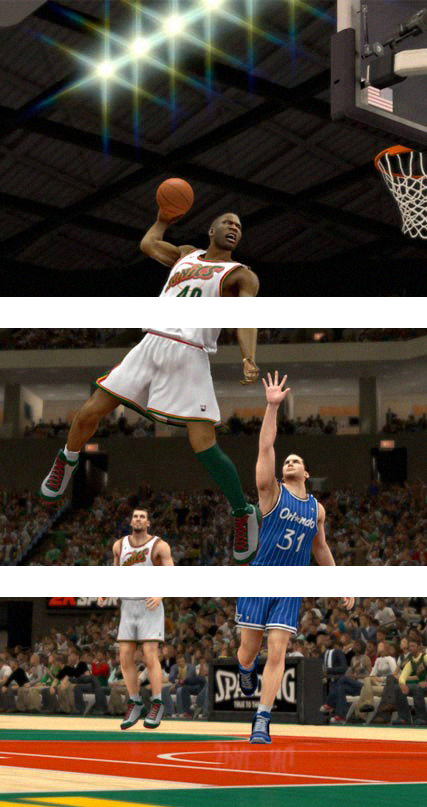 Dribbling is more accessible, but it's not simplified. The previous system's depth remains, while allowing newcomers in. However, casual players still have a long road ahead if they want to utilize the pros' variety of dribbles and shots. The tutorial is comprehensive but perfunctory: You can go through and learn all the individual commands, but NBA 2K13 doesn't teach you how to put it all together. Situational awareness separates the greats from the rookies, and it requires better training than NBA 2K13 provides.

The other mechanical improvements in NBA 2K13 appeal to a wider crowd — particularly a new system that produces realistic collisions and alters shot paths accordingly. Combined with controller vibration when you get bumped, the collision system brings the physicality of the NBA to life. The action in the paint looks much better, with players forced to adjust shots in mid-air; stalwarts in the post such as Dwight Howard can now make their presence felt more easily.

SWEARING AT YOUR TV WILL RESULT IN A TECHNICAL FOUL

NBA 2K13's tweaked passing becomes apparent after your big man grabs a rebound under the basket. Throwing to teammates feels much more unpredictable, but in a good way. A higher probability of loose balls makes for a dynamic passing game — it forces you to throw passes more intelligently against defenders who are quick to intercept careless tosses. In-game Kinect integration keeps you out of team-management menus and offers a funny dose of realism: Swearing at your TV will result in a technical foul.

Those changes join other improvements in MyCareer (formerly known as My Player), the single-player career mode. Role-defining Signature Skills let you customize your star beyond his attributes. I liked the option to buy some abilities that magnified my player's strengths (and my own outside-shooting play style), and others that minimized his weaknesses. NBA 2K's career setup consistently features a better implementation of off-the-court interactions than any other sports game, and MyCareer upholds that tradition. 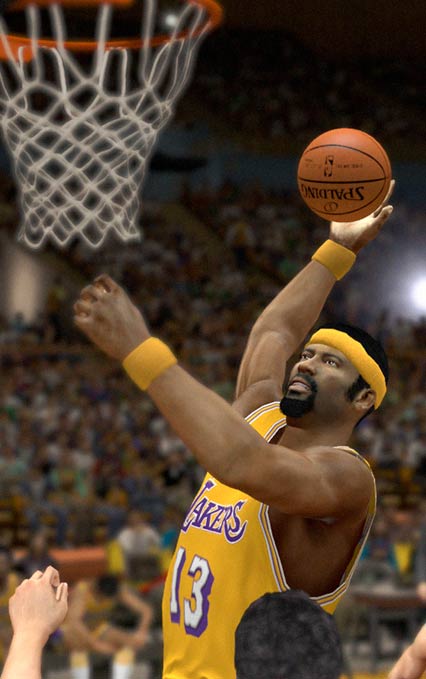 These RPG-like modes are designed to connect you to your player, and I certainly felt proud to see my athlete's face on a billboard or being used to advertise ticket packages. The new option to chat with your general manager even lets you influence the direction of your career and team, a realistic interaction that makes you feel like you're part of a basketball club. NBA 2K13's social media feature (read: in-game Twitter) — which incorporates cheers and jeers from fans, fellow athletes, and celebrities — furthers that sense of immersion, of living life as an NBA star.

MyTeam, a brand-new mode for the franchise, is essentially a clone of EA Sports' "Ultimate Team," which lets you assemble your own fantasy team with in-game trading cards. The best thing I can say about MyTeam is that I experienced little to no lag while playing other users online — Visual Concepts finally appears to have resolved that perennial shortcoming of the NBA 2K franchise. I can understand the allure such modes have for fans, but I've never cared for them in other games, and NBA 2K13's implementation didn't do much to draw me in.

Worse still, MyTeam replaces last year's terrific NBA's Greatest mode. No sports series had been doing anything nearly as interesting with its sport's history, and I'm sad to see it go. The mode's classic teams, as well as the newly introduced USA Basketball men's teams from the 1992 and 2012 Olympics, can be used in exhibition games. But it's a tremendous disappointment seeing those historical squads relegated to one-off contests rather than highlighted in their own compelling stories.

Since NBA 2K13 remains the only basketball sim on the market, I'm glad that it's another great entry in the franchise. It's not just a joy to play; the surrounding elements elevate it to something that's clearly aware of its place in the context of the NBA itself. NBA 2K13 sits at the intersection of basketball and hip-hop culture, and Jay-Z's production sensibilities marry the two beautifully.